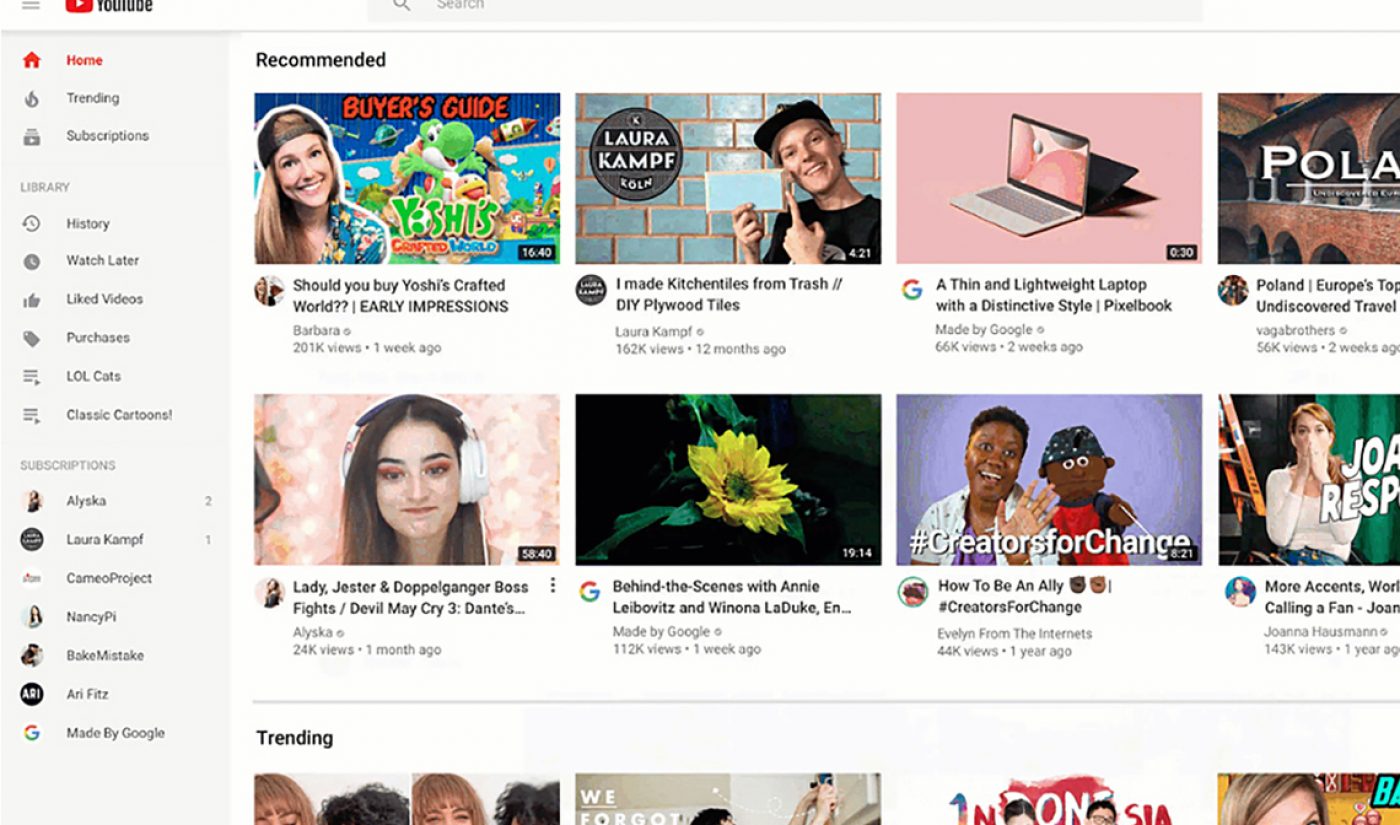 Despite a largely negative response from users, YouTube has implemented the homepage redesign it tested back in August, dramatically increasing the size of videos thumbnails for users browsing on a computer or tablet.

During its original test of the change, YouTube said the goal was “to improve the watch experience for our users.” After an outcry from some users enrolled in the test, YouTube invited them to send their thoughts via its official Send Feedback tool — and it appears the platform did listen to folks who complained the first iteration of the layout was cluttered and confusing to navigate.

“We’ve been experimenting with this updated design for a few months and — based on your input — have made dozens of improvements to the layout, most notably adjusting the thumbnail sizes and showing more videos on larger screens,” Essam El-Dardiry, one of YouTube’s senior project managers, wrote in a blog post about the change.

The new layout, which began rolling out today across browsers and Android/iOS tablet apps, displays four large thumbnails per row. Content is spaced out, with generous strips of white space between each row and each video.

Here’s a before-and-after of YouTube’s new ’do:

As for how this affects the content that appears on the page, a YouTube spokesperson tells Tubefilter this does mean there will be fewer videos on the homepage overall. Showing fewer videos is the trade-off for being able to display more information about the videos that are on the page, they added.

So, how much more information is YouTube displaying? Pre-update, a block of information below each video displayed the video’s title, creator, view count, and upload date. Post-update, creators’ individual icons are also displayed below the videos, and longer titles now have the room to show up in full.

Thumbnail size isn’t the only cosmetic change YouTube is making with this update. It also removed Shelves, which previously appeared on the left side of the page, offering categories of content like News or Music. In his blog post, El-Dardiry said the removal is part of having a “cleaner design,” and noted that dedicated rows of videos for these oft-visited content categories will populate on the new homepage.

YouTube has additionally made some functionality changes, including the addition of a feature that lets users add a homepage video to their queue by simply hovering over it and clicking the new button — three horizontal lines — in the upper righthand corner. (Previously, users had to right-click on the video and select Add to Queue from the list of options that popped up.)

One important note with that new queue function: If you close your browser, your queue won’t be saved; it’s purely a current-session-only feature that plays videos one after another. If you actually want to hang on to videos you intend to watch, you’ll have to add them to your Watch Later playlist.

One more new feature El-Dardiry addresses isn’t technically a new feature. It’s ‘Don’t recommend channel,’ a feature YouTube is bringing over to desktop/tablet after rolling it out on mobile in late June. The feature, as its name suggests, lets users wholesale block an entire channel from ever being recommended. YouTube cautioned that videos from a blocked channel still could pop in search results or the Trending tab (so it’s not quite as aggressive as, say, Twitter’s block/mute functions), but blocking a channel means the platform’s recommendation algorithm will completely stop serving them up.

These aren’t the last of the changes YouTube plans to make to the homepage. In the future, it’ll bring over another mobile feature: an Android-only function that lets users customize which videos show up on their home by selecting topics they’re interested in. El-Dardiry said that feature will come to desktop/tablet “soon.”