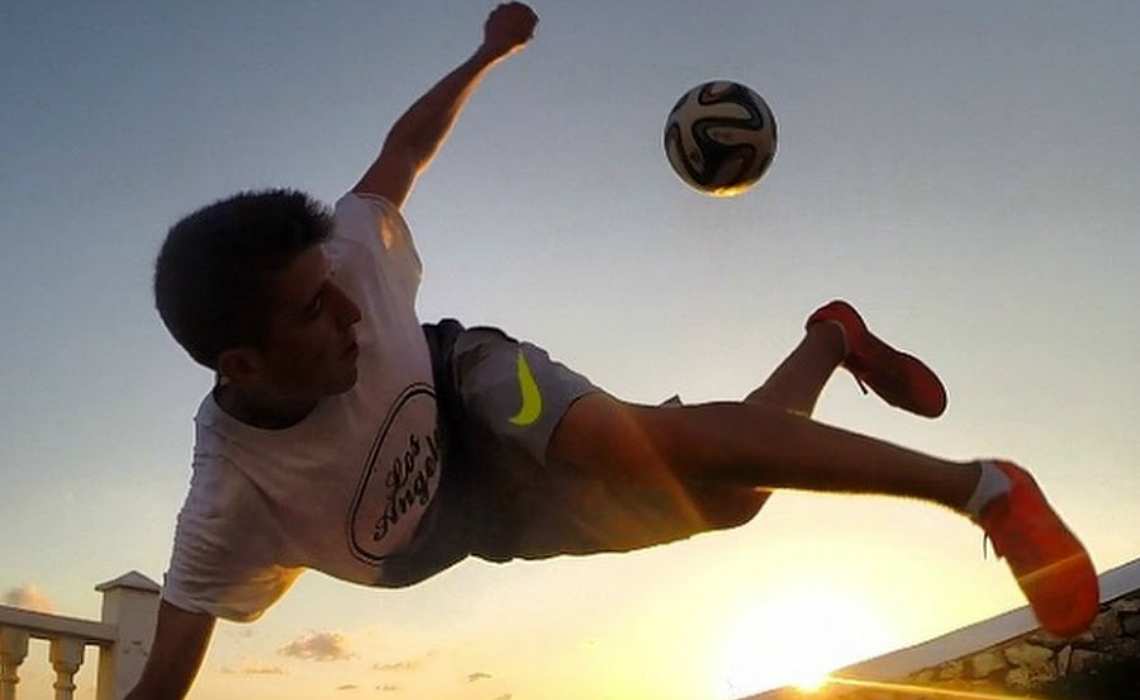 Well, soccer and YouTube. Brown (who’s British and therefore, like virtually every single non-American person out there, calls soccer “football”) is a lifelong enthusiast who also happens to be pretty fast on his feet — fast enough that he’s a top freestyler, a master of meshing soccer skills with self-expression. If you’ve ever seen a soccer player casually juggling a ball, you’ve seen the basics of freestyling. But players like Brown take it much further, performing athletic, acrobatic moves and complex routines, all revolving around a soccer ball.

Brown brings his YouTube fans — as you may have guessed, he now has more than one million of them — along for his own freestyle adventures, like that time he entered a pro competition, that time he tried his hand (his feet, really) at busking, and that time he took a deep dive into commercials’ faked tricks (below). But he’s also welcomed a variety of worldwide soccer and freestyle pros onto his channel, including former Barcelona midfielder Ronaldinho Gaúcho, reigning world freestyle champion Andrew Henderson, and Séan Garnier, a former pro player who founded the team Street Style Society, which wraps in multiple freestyle sports, including soccer.

Brown’s dedication to soccer is matched only by his dedication to YouTube. He doesn’t know exactly what the future holds, but he does know that, no matter what, soccer and YouTube will always be a part of it.

Kieran Brown: It feels amazing. I know a lot of people say, this but it’s a number I genuinely never thought I’d reach. But the buzz soon wears off, and you get back to working on videos to grow even more! And I would like to thank everyone who’s supported me by watching my videos!

Tubefilter: Tell us a little about you! Where are you from? What turned you into a soccer enthusiast?

KB: I’m Kieran, Capricorn, from West Midlands. Always loved football from a young age, but that love for football turned to a love for freestyle football at age 14, and then that turned into a love for creating videos!

KB: I use to make random fun videos with friends. I bought a camera to film skating videos, but then, one day, me and my mate made a video of us doing some skills in my garden to show our friends, and it just went from there!

Tubefilter: You’re super passionate about soccer tricks—trying them for yourself, debunking bogus ones. What makes that particular aspect of the game so appealing to you?

KB: Skills for me is the most beautiful part of the game. Seeing icons like Ronaldinho entertain and inspire millions is something that has really motivated me, and maybe the personal goal of practicing and finally learning something is what I enjoy!

KB: My content is short, engaging, unique. I don’t like to make my videos too long, so I don’t do things like leave in shots that don’t need to be there just to make the video 10 minutes long. I think viewers appreciate that.

Tubefilter: What’s your production process like? How long does the average video take you to make, from conception to posting? How do you come up with ideas for new videos?

KB: Sitting at my desk for hours on end is how I try to come up with ideas, but the truth is the best ones just come out of nowhere! I’ve made some videos — filmed, edited, uploaded — in one day before, but have spent up to three weeks on others!

Tubefilter: You recently did something very cool: welcomed world freestyle champs to your channel. How did you hook up with them? What was filming with them like?

KB: Andrew Henderson is a good friend of mine whom I met at an event (and tried not to fanboy too much, knowing he was the world’s best at something I have a massive interest in). We arranged to make one video together, and we’ve made loads since then and become great friends!

KB: There have been many points where I’ve had massive peaks. The trick shots countdown video was my first viral video, then I made a video with miniminter, which grew my numbers a lot, then Ronaldinho, and recently my fake skills video! But this is over the space of seven years, so overall it’s been pretty steady!

Tubefilter: What else do you get up to in your daily life? Is YouTube your full-time job?

KB: YouTube is my full-time job, which means a lot of filming, editing and taking of ideas! I also do jobs such as commercials and freestyle work, and spend a lot of time going out with friends to help keep me sane!

KB: When I’ve got an idea I’m excited about. The feeling when you have an idea and you know exactly how you’re gonna execute it is great, but also when you’ve just made a video you’re super happy with, and you’re just about to edit it, there’s something exciting about not quite knowing just how it will look yet, but knowing it’s gonna be good!

KB: This question I get asked a lot, and I honestly have no clue! Think I’m just riding the wave right now with no clear idea of where I want to be, so it’s something I’m still thinking about! But right now, I’m loving making videos!

You can add yourself to the ranks of the Brown’s more-than-a-million YouTube subscribers at his channel YouTube.com/FootballSkills.