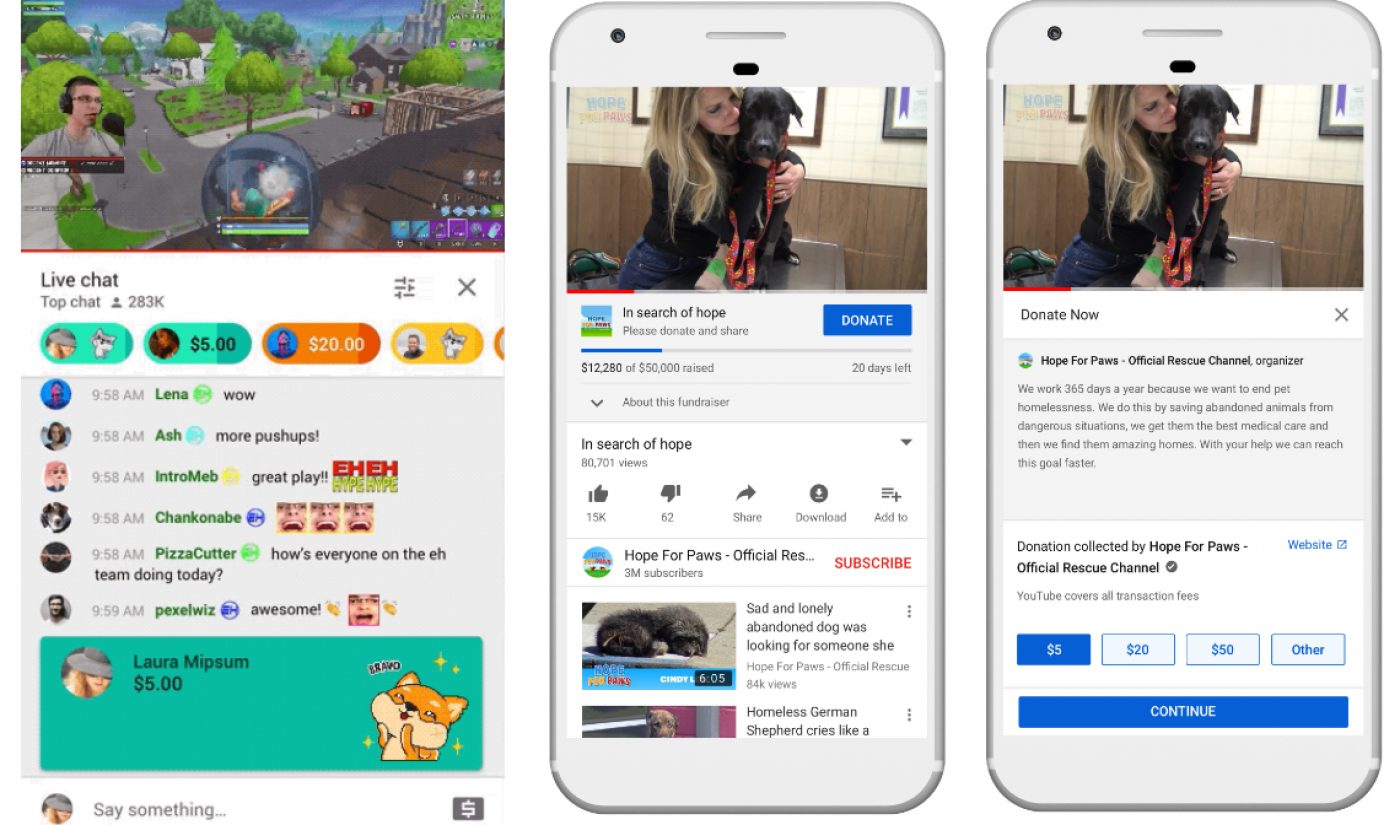 In an associated blog post about the announcements, Mohan wrote that in the past year, creator revenue from monetization features like Super Chat, Channel Memberships, and Merch Shelves has grown significantly, and that “thousands of channels” have more than doubled their YouTube revenue by implementing these tools.

It’s due to their success that YouTube is bringing changes: expanding Channel Memberships and Super Chat, onboarding five new vendor partners for the below-video Merch Shelves, and planning to bring YouTube Giving out of beta so more creators can mobilize their audiences to raise money for the causes that matter most to them.

Let’s take these one at a time…

Late last year, Channel Memberships opened widely to creators with more than 50,000 subscribers. Fans of those creators can become “members” of their channels, paying $4.99 per month for access to things like unique badges, emojis, early video releases, exclusive livestreams, and behind-the-scenes footage.

Since the feature rolled out, one of the most popular requests from creators has been to add Patreon-like levels, where they can offer memberships at multiple price points, Mohan wrote. (For example, a member could pay the basic $4.99 and receive the above mentioned rewards, but a member paying perhaps $6.99 could access an exclusive Q&A session each month.)

As of today, creators can now do exactly that. They can set up as many as five different levels, with five different price points. Mohan revealed that for the past few months, YouTube was testing levels with production company Fine Brothers Entertainment (FBE) and its flagship reaction channel (19.3 million subscribers). Ater adding two higher-priced tiers during the test, FBE saw its Channel Membership revenue increase six times.

Super Chat, which lets viewers pay to shout out a message during a creator’s livestream, is now the No. 1 revenue stream on YouTube for nearly 20,000 channels, Mohan wrote. More than 90,000 channels total have received Super Chat messages, with some creators bringing in as much as $400 per minute.

YouTube is pushing this success by expanding Super Chat with Super Stickers. This new feature will roll out in the coming months, and will let viewers purchase animated stickers with imagery from categories like gaming, fashion and beauty, sports, music, and food. Like Super Chat messages, Super Stickers will pop up prominently during the creators’ livestreams, so all those watching will know who sent what.

Mohan did not reveal how much it will cost viewers to send Super Stickers.

Last November, YouTube launched under-video Merch Shelves with custom product vendor Teespring. The shelves enable creators who sell products through Teespring to embed a row of product links directly below their videos, so viewers can purchase right there from their channel.

After today, creators who vend merch through John and Hank Green’s DFTBA, Texas-based creative studio Rooster Teeth, or influencer merch specialty companies Crowdmade, Fanjoy, and Represent can also use Merch Shelves to vend their items right below their videos.

Not a big update here, but Mohan announced that YouTube Giving will officially move out of beta in the coming months and be available to “thousands” of creators. What the requirements for those creators will be isn’t clear yet.

YouTube introduced the feature last year with select creators. With it, creators can funnel donations directly to a number of charitable organizations, and because YouTube covers all the administrative fees for handling the donations — both on the donors’ side and on the charities’ — 100% of funds given through the tool go to the organizations.

Mohan also dropped one last update, this one not related to monetization. YouTube is amping up its foray into supporting educational content by creating ‘Learning Playlists,’ intended to be a dedicated environment for the thousands of people who seek educational and how-to content on YouTube each month.

Videos within Learning Playlists will not come with an ‘Up Next’ bar of recommended videos, because YouTube wants students to keep their minds on the current lesson instead of looking to what’s next.