PewDiePie Mulls The Relative Decline Of His Channel, Says Taking A Break Could “Kill” It 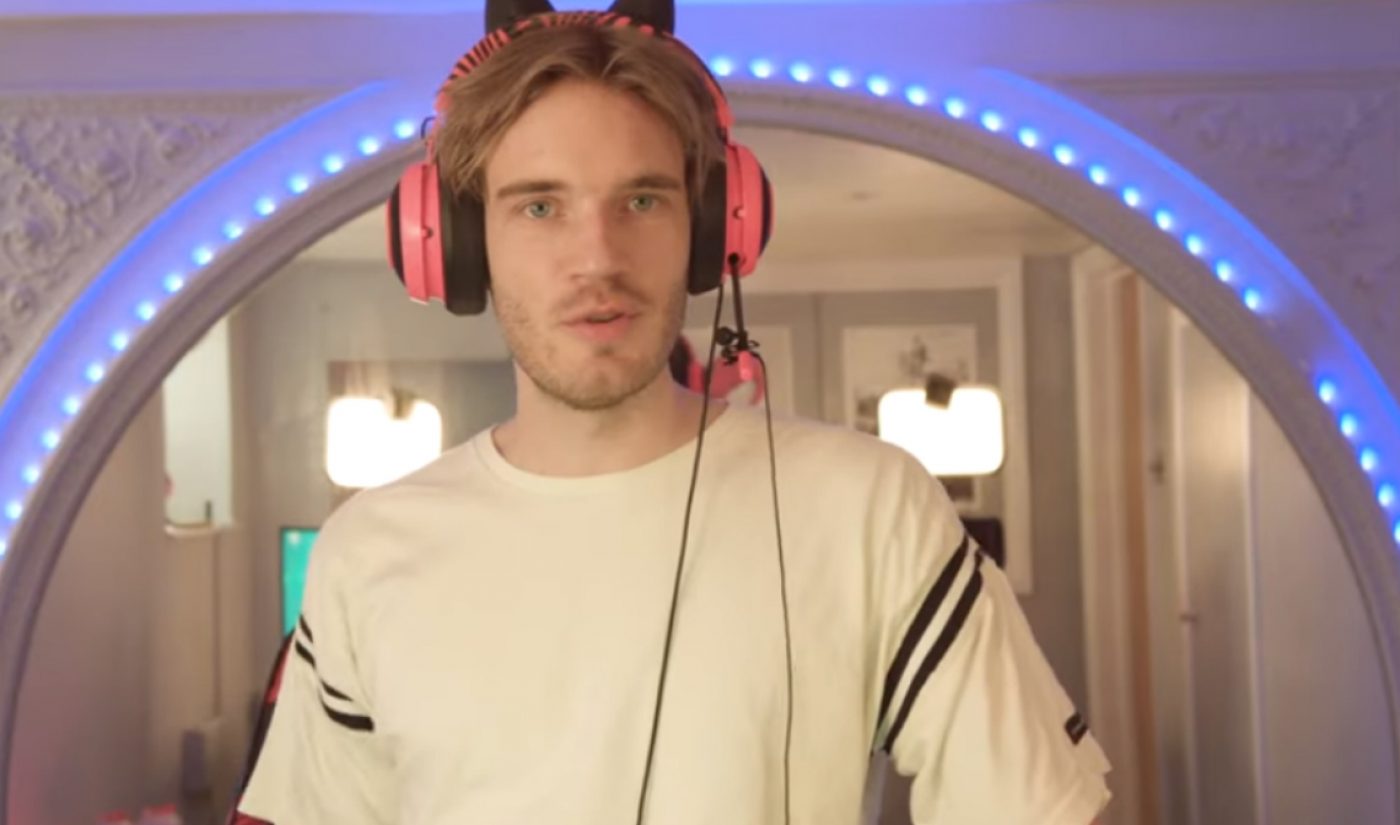 The rapid 31 million subscriber gain PewDiePie’s channel experienced during his six-month battle with Bollywood record label T-Series has dropped off after his official concession and request that his supporters stop using the “Subscribe to PewDiePie” rallying cry.

In yesterday’s upload, the YouTuber — whose real name is Felix Kjellberg — probed the “death” of his channel by tracing the popularity of ‘PewDiePie’ as a search term using Google Trends. The Google service, along with offering lots of helpful breakdown information (like which countries generate the most searches for a particular item), tracks how often terms are searched and ranks them based on all other searches.

While Trends’ information is publicly available, Kjellberg’s examination is a sort of inside look at the lifetime growth of one of YouTube’s most watched creators.

Kjellberg looked at the Trends chart from the earliest available information until now. (You can see a replication of that chart below.) He started his channel in 2010, but searches for ‘PewDiePie’ only started popping up in significant numbers in 2012, which is the year Kjellberg gave a presentation at gaming conference Nonick about doing ‘Let’s Plays‘ as a job. At that time, Kjellberg says in his video, he wasn’t entirely sure he’d be able to make a full career out of Let’s Play content, as the legality of monetizing them wasn’t (and still isn’t, to some extent) clearly defined.

The numbers on the y axis rank a term against itself. The time periods where it’s ranked 0 means there wasn’t enough data for it to show up on Trends. Rank 100 is the term’s most popular moment.

In August 2013, Kjellberg became the most-subscribed-to channel on YouTube. Then, in August 2014, his search popularity spiked. “What happened in 2014?” he asks, paging through old videos and search results. “I played games in 2014,” he concludes. “No controversy, no nothing.”

His next big spike, however, was the result of controversy. In January 2017, he infamously paid two freelancers $5 to dance and hold up a sign saying “Death to all Jews”. He faced widespread backlash, which metastasized when the Wall Street Journal published a story reporting nine other instances of anti-Semitic themes and Nazi imagery on Kjellberg’s channel — all posted prior to the $5 video. Kjellberg’s supporters condemned the story, and apparently still hold a grudge, judging by a hack this past December — during the height of the T-Series battle — that saw them replace one of the WSJ’s pages with an apology to Kjellberg, along with a call for readers to subscribe to him.

Following the “Death to all Jews” video, Kjellberg continued vlogging daily, but saw a general drop in search popularity until T-Series arrived. The record label first looked likely to overtake Kjellberg around October 2018, but fervor from fans, along with stunts from YouTubers like MrBeast and Markiplier, kept him afloat. Those stunts, along with the competition in general, pushed Kjellberg back into news coverage, and his popularity reached an all-time high in December 2018.

That high was broken, however, by his search data for March 2019. That’s the month where a shooter livestreamed himself killing 51 mosquegoers in Christchurch, New Zealand. Before he began shooting, he told viewers to “Subscribe to PewDiePie.” Kjellberg disavowed the shooter on Twitter, and later released a video talking about the impact of the massacre and requesting that his fans stop using the slogan. He conceded in the PewDiePie vs. T-Series battle March 31.

Since then, his search traffic has dropped off, and while he once looked to be the first YouTube channel to break 100 million subscribers, that honor ended up going to T-Series. (Kjellberg currently has 96.6 million subs).

But that doesn’t necessarily mean his channel is “dying.”

Internal Tubefilter data shows both his monthly view count and subscriber gain have been declining since December, but for a channel as massive as Kjellberg’s, a decline still means he’s bringing in at least 300 million views and one million new subscribers each month.

You can see those numbers in charts below: 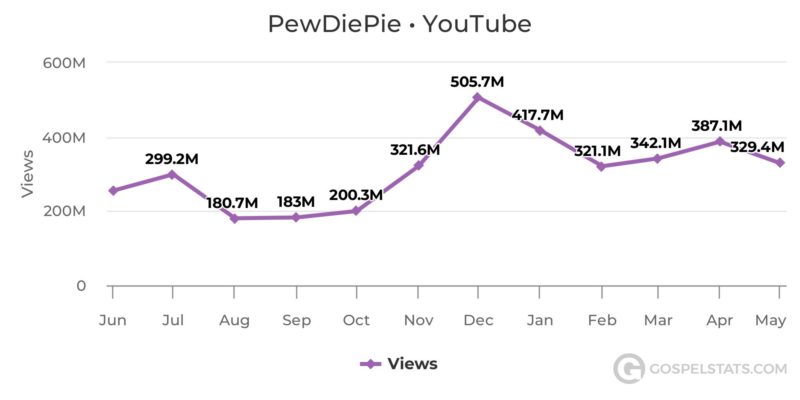 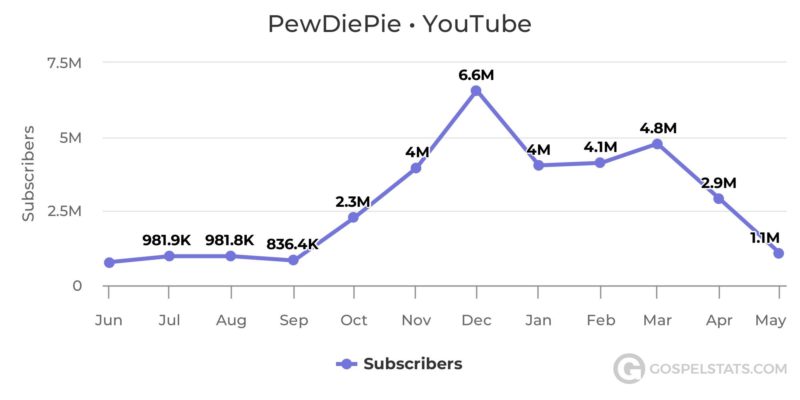 Kjellberg’s monthly subscriber gains from June 2018 to May 2019.

While there is a noticeable drop in both Kjellberg’s view and subscriber counts, his numbers haven’t yet dropped back down to where he was prior to T-Series’ challenge.

This is apparently the first time Kjellberg has looked at his Google Trends information. He also briefly looks at his stats on SocialBlade, which tracks the popularity of many creators’ channels. But he isn’t keen on picking that data apart the way he did Google’s. “Imagine you have a job, and how well you are performing in that job is 100% public, and 100% comparable to all your peers,” he says. “There’s some deep psychological, emotional stress that is always lingering for a lot of YouTubers.”

Kjellberg wraps his video by apparently considering taking a break from vlogging — something he hasn’t done since he began uploading daily in 2010. “I’ve never had a proper break,” he says. “I’ve never had a long break where I’m just a normal f-cking person that isn’t constantly thinking about YouTube. But literally if I took a break, it would kill my channel.”

That’s a common sentiment expressed by many creators: they feel YouTube’s algorithm will “forget” them if they take time off making videos. YouTube execs have refuted those claims, but for creators, the concern persists.

Ultimately, though, “It doesn’t even matter,” Kjellberg says. “We’re all gonna be replaced by AI in the future.”

You can see his upload below.