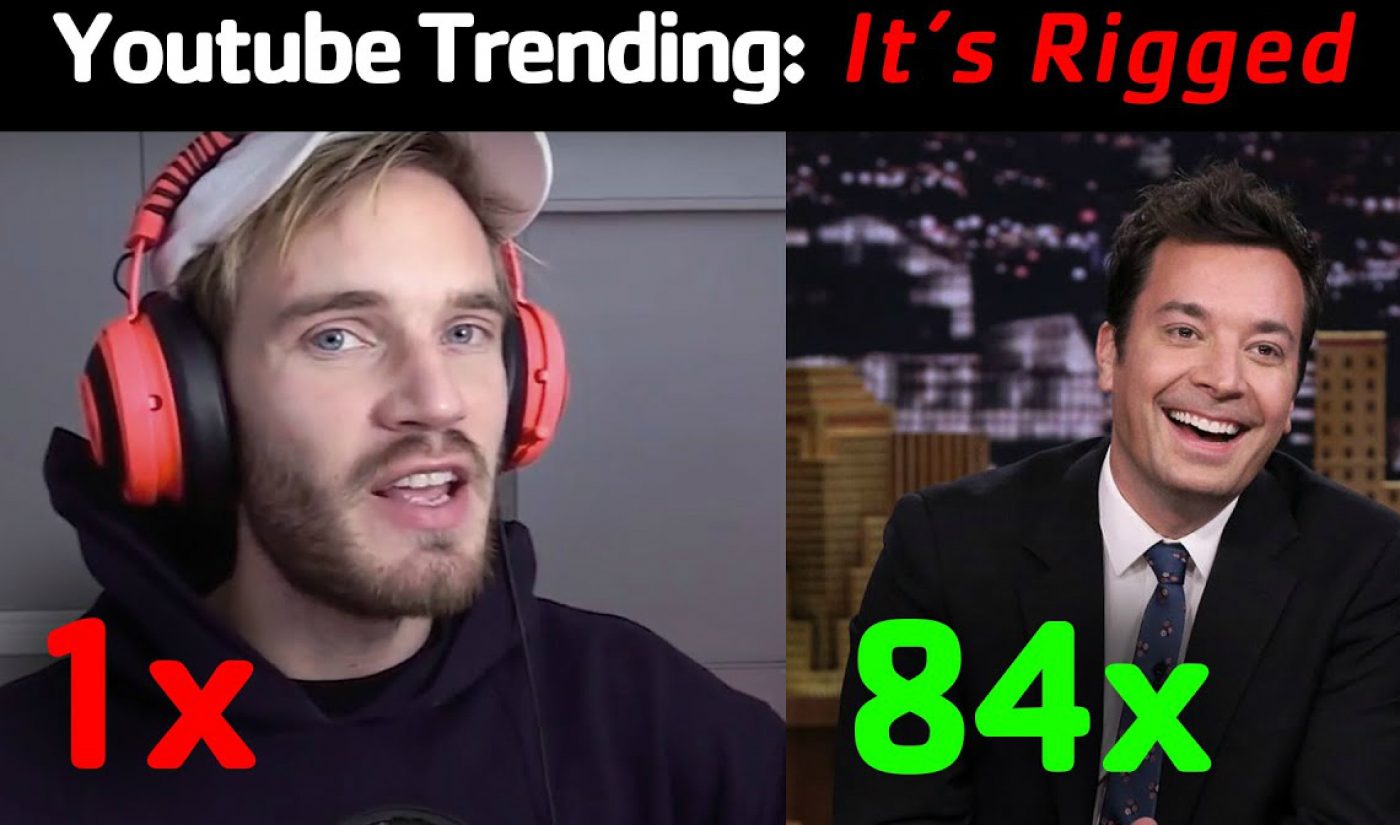 This data comes from an analysis by Stephen, the first-name-only creator of YouTube channel Coffee Break (which has 328K subscribers). In his newest upload, Stephen reveals that he spent the past seven months analyzing data scraped from more than 40,000 videos uploaded between November 2017 and June 2018. Those videos came from about 2,000 unique channels.

Using data from computing science specialist Mitchell Jolly, Stephen earmarked each of those 2,000 channels as either a traditional media channel or an independent, YouTuber. Traditional media channels he looked at included the aforementioned ESPN (5 million) and CNN (6.8 million). Independent YouTubers included the likes of Logan Paul (19 million), PewDiePie (96 million), and Philip DeFranco (6.3 million).

Once he had the channels sorted, Stephen zeroed in on viewcounts when videos hit the Trending tab. The results showed the tab “overwhelmingly” favors traditional media.

“ESPN, The Ellen Show, Jimmy Fallon, Jimmy Kimmel, Stephen Colbert, Netflix, the NBA, CNN, Vox — the most mainstream of mainstream media is who we see overrepresented on Trending over and over and over again,” he says.

Why is that? According to Stephen’s findings, it’s all about barrier to entry. His analysis showed that Logan Paul, arguably one of YouTube’s most well-known (and most contentious) creators, needs one of his videos to receive a bare minimum of 11 million views before it gets anywhere near the Trending tab. A video from ESPN, on the other hand, only needs 500,000 views to trend, according to the data.

YouTube has faced especially pointed criticism about the Trending tab in recent months — criticism spearheaded by documentarian Shane Dawson (21.6 million). In March, he tweeted that he “wish[ed] the Trending page on YouTube was real.” YouTube CEO Susan Wojcicki quickly arranged a “tea session” with Dawson to talk about his views. Shortly after their chat, Wojcicki discussed the Trending tab in her quarterly letter to creators. She assured creators that YouTube plans to tweak the Trending tab so that at all times, at least 50% of trending videos will come from native creators. (The other 50% will come from traditional media and music.)

Since Stephen’s data is from 2017 and 2018, it obviously isn’t reflective of how the Trending tab is organized now. But the fact that Stephen’s research was initiated months ago, before Dawson publicly raised concerns, speaks to how long the Trending tab has been on creators’ minds.

Other findings from Stephen’s dataset show that what he refers to as “controversial” YouTubers like Logan Paul, PewDiePie, and KSI (6.9 million subscribers) trend less frequently in the U.S. than they do in other locales like the U.K., Mexico, and Canada. Stephen suspects this is because YouTube has a stronger U.S.-based content moderation team that may be actively bumping creators the platform considers problematic off the Trending tab.

And last up, Stephen revealed that 95% of news content that hits the Trending tab comes from traditional outlets like the Washington Post (677K) and Vox (6 million). DeFranco, with his eponymous daily morning show, was one of the only native news content creators to appear on Trending, and his view count threshold was 1.4 million. He trended twice between November 2017 and June 2018. Meanwhile, the Associated Press’ (985K) view count threshold is 10,000; it trended seven times in the same period.

“This is just a different bar and standard for independent creators,” Stephen says. Responding to YouTube’s plan to make Trending 50% native creators, he adds, “All I’ll say is that it’s not about percentages. It’s about a level playing field.”

You can watch his video in full below.