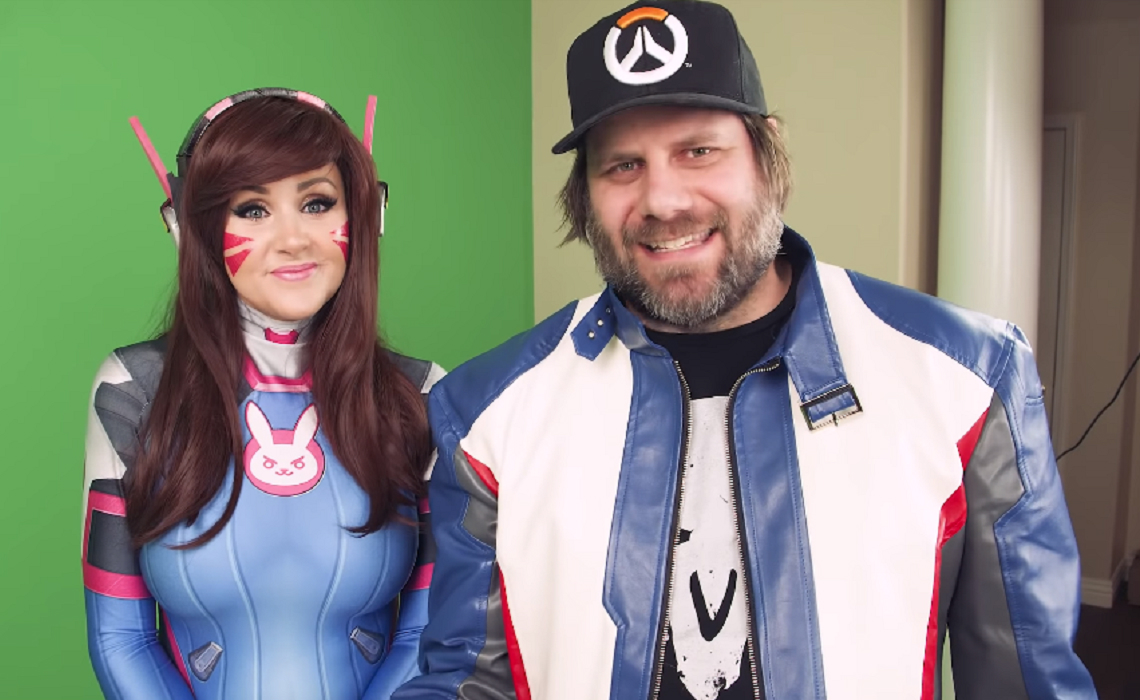 Creator couple Angie Griffin and Chad Nikolaus met online more than a decade ago, and after being YouTube creators for nine years, they still like to keep things old school. Just the two of them, mostly homemade props, and a simple green screen. But rest assured, Griffin and Nikolaus kicking it old school doesn’t mean their channel, Screen Team, is behind the times. They regularly serve up parody songs, intricate cosplays, and a wealth of other geeky content about the latest films and video games — and now, they’re dishing that content out to more than a million fans as bona fide YouTube Millionaires.

Screen Team has a little something for every enthusiast: fans of the massively-popular battle royale game Fortnite, Marvel mavens, Star Wars enthusiasts, and many, many more can find something to love in the couple’s nearly 500 videos.

They’ve taken a bit of a break from YouTube of late so Angie, an expert cosplayer, can focus on producing costumes and photos for her Patreon (a platform where creators’ fans can chip in financial support for them and receive exclusive content in return). But the lapse isn’t permanent — more Screen Team content is on the way.

Check out our chat with Griffin and Nikolaus about being longtime YouTubers, creating a variety of content, and how they balance being two “strong-willed” creators in charge of one channel.

Screen Team: It feels great to hit one million YouTube subscribers! Wow! We really appreciate every single one. Every view, comment, and like, too. Every so often, we’ll imagine what one million people look like standing all together in person, and it’s mindblowing! Honestly, it’s very humbling.

Tubefilter: How did the two of you meet, and how did you decide to start a YouTube channel together?

ST: We met on an old website called Hot Or Not. Anyone remember it? It was sort of like one of the first dating websites, but it was more focused on rating people’s photos! Chad being from Wisconsin, and Angie in California, we decided to meet up in person, despite some family and friends thinking it had to be a serial killer on the other end.

We hit it off in person, and one day we talked about how we both enjoyed making home movies. Skits, and that sort of thing. We pulled out an old video camera with the tape inside, and gave our thoughts on The Dark Knight. From there, we started to explore and experiment with various video types — before YouTube even had monetization! It was just for fun, to be part of that old YouTube community.

Tubefilter: You guys have had consistently themed content right from the start of your channel. How has your content changed over the years? How has your backend production changed?

ST: We’re both gaming nerds. We grew up on video games, Star Wars, Power Rangers, Pokemon, all that. It only felt natural to create videos about the things we love. When we began, being a geek or gamer wasn’t as widely accepted. At the time, it was like “What the heck, someone made a song about Donkey Kong?”

These days, it’s more common, of course. I mean, we had to make our first Thor costume by hand. A black shirt with some silver circles glued to it. That was it. Now, you can buy a full-blown, movie-quality Thor suit if you want. Despite that, we still like to keep it kind of homemade as often as we can. We still do everything ourselves, just us two. It’s a decision to remain independent for YouTube because we feel that’s what it’s been about from the start. Maybe that’s something people can relate to.

Tubefilter: What do you think makes your voices stand out despite all the noise on YouTube?

Tubefilter: When did you start to notice your subscriber count really taking off? Is there a particular series or video that pulled in lots of views?

ST: For us, it was a slow and steady climb over the years. We just kept plugging away, and eventually hit one million! We still see some of the very first subscribers around, and really appreciate that!

Tubefilter: How do you two balance work for the channel? Is it ever challenging, creatively, to come up with and execute ideas together? How do the two of you come up with your content ideas?

ST: We both just happen to have different skill sets. Angie is extra creative, has most of the original ideas, creates costumes, and is smart with marketing. Chad is more into the music production, filming, and editing. So, we naturally fill our own roles. Still, it can be quite a challenge when you have two strong-willed people in charge of something that could literally be anything! If that makes sense.

Tubefilter: Do one or both of you consider YouTube your full-time job? What else do you get up to in your daily lives?

ST: We’re both full-time creators, and YouTube has been our main platform over the years. Right now, Angie’s got her Patreon as well. We’ve added photography and modeling into the mix. Everything together is definitely a full-time job for both of us. As challenging as it is, it’s very rewarding, and we’re thankful for the chance to try and create entertainment for a living.

ST: If we take a minute to reflect on the last nine years on YouTube…it’s got to be the community! All the people who leave great comments, and give their support. We had a few people propose to their spouse using one of our songs! We see the videos of kids dancing in their bedroom to one of our parodies. That means a lot to us.

ST: We’re excited for the future of our YouTube channel. It’s on a bit of a break at the moment while we handle the huge response to Angie’s Patreon. But we’ll be back for sure. We’ve been thinking a lot about what drew people to us in the first place, so we hope to make the old-school viewers happy. And also try keep it fresh for the kids, as always!

You can add yourself to the ranks of Screen Team’s more-than-a-million YouTube subscribers at their channel YouTube.com/ScreenTeam.