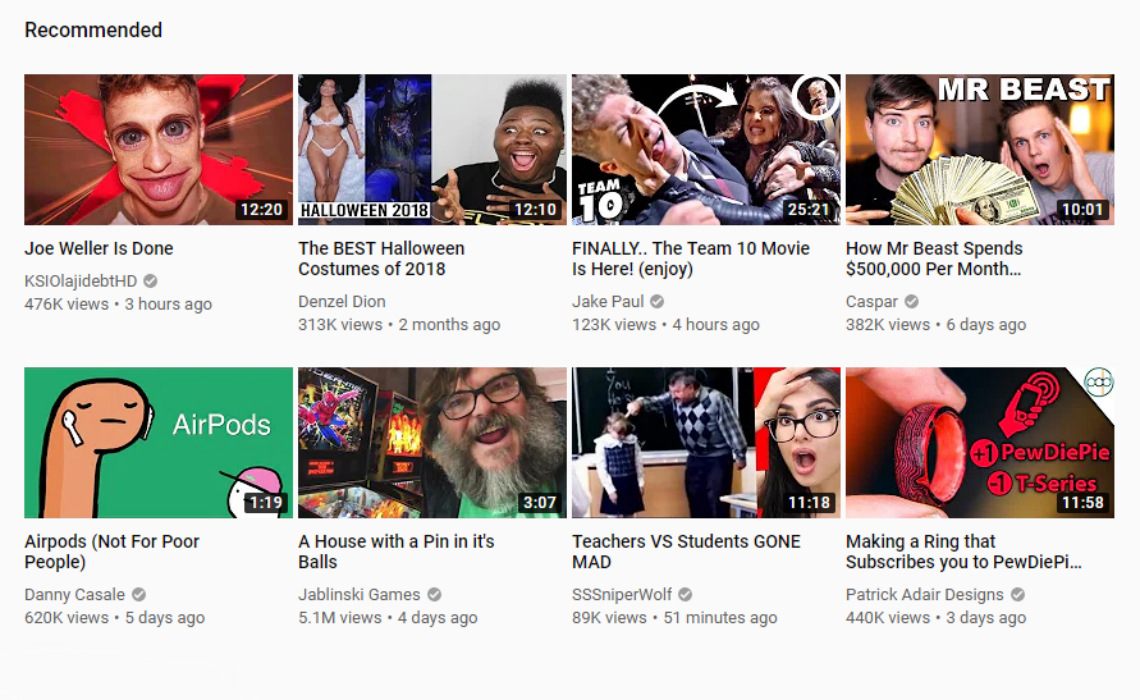 After a number of complaints from Reddit users, YouTube says it has fixed a bug causing random videos to be recommended on users’ homepages and in their ‘Up next’ sidebars.

Reddit threads about the issue have been popping up over the past day or so, with many users noting they’d been recommended gaming videos, but were not interested in video games, or had never watched content about the video games being specifically recommended. Other users reported that they were watchers of gaming content, but when they watched videos about gaming, they were then served unrelated recommendations in ‘Up next’. For example, one gaming fan reported being served “a fitness video about a guy eating KFC for 24 hours recommended to me based on a Runescape player-killing video.”

Yet more Redditors reported that, even when they clicked ‘Not interested,’ the videos didn’t disappear (as they normally do if you tell YouTube you’re not digging something it’s recommending). “First it was Fortnite and Roblox,” one user wrote. “I clicked ‘Not interested’ and ‘Not interested in this channel’ on all of them. Refreshed. Same sh-t. Repeat. Refreshed. Now it’s a bunch of rap music and sports. YouTube is doing their damnedest to show me the stuff I hate the most.”

The user who encountered the KFC video, along with a handful of others, also reported being recommended Indian-language content, which led some to blame the wonky recommendations on T-Series, an India-based record label with a subscriber count large enough (79.4 million) that it’s expected to — sooner or later — overtake YouTube’s most-subscribed creator PewDiePie (80.2 million).

Late yesterday, a YouTube representative commented on one of the Reddit threads, saying, “Just confirming that YouTube is aware of this thread and looking into it — we do think something weird is up.”

The rep’s comment was later amended to add that YouTube found and fixed the cause of the issue, but no further information was provided. If you’re still being served unusual or unrelated recommendations, the rep has asked viewers to leave a note in the Reddit thread.