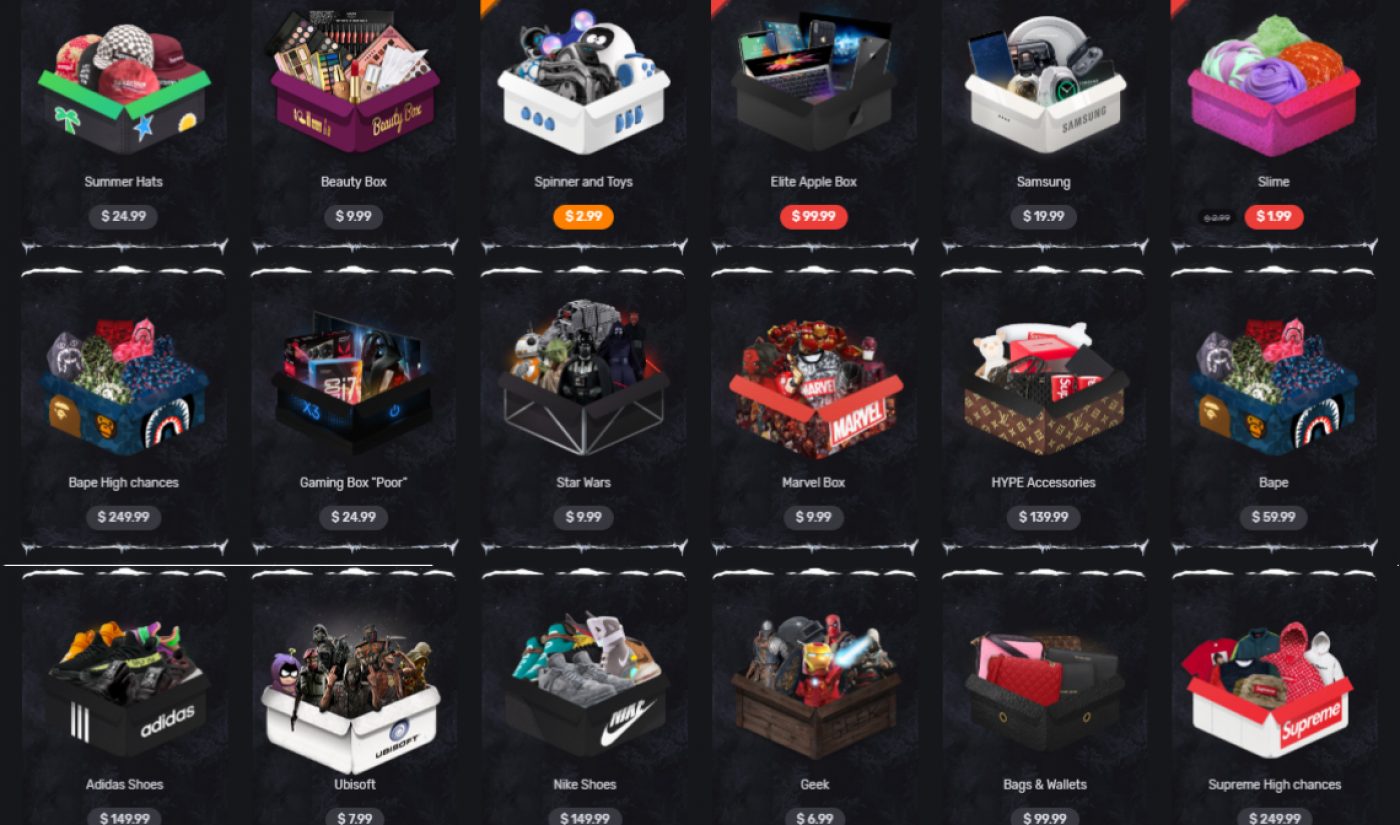 MysteryBrand.net, the Polish mystery box website that came into the spotlight after paying YouTubers like Jake Paul and Bryan ‘RiceGum’ Le to promote it, has responded to an online uproar.

The service is reminiscent of the popular ‘mystery box’ trend on YouTube, where creators purchase boxes from sites like eBay and open their unknown contents on camera. It’s also been compared to loot boxes in video games — for which gamers can spend in-game currency (or, in some cases, actual money) to crack open a virtual box that can contain a variety of goods. With Mystery Brand, users pay a flat price to ‘open’ digital mystery boxes, and generally receive one item per opening. Boxes are usually themed — such as the ‘Elite Tech’ box, which costs $89.99 to open and could contain items including a flashy iPhone XS, a $2,000 drone, an electric kettle, a door lock, or earphones.

In their videos, Paul (17.6 million subscribers) and Le (10.8 million) both won a handful of lower-priced items like fidget spinners and Converse sneakers, but also won top-tier prizes like an iPhone and pairs of expensive shoes. Some commenters wondered if they had been given better odds of winning big-ticket items as part of their deals with Mystery Brand — but a rep from the company, Tim Perk, told The Verge that this wasn’t the case.

“Our site provides everyone with equal odds of winning certain prizes,” Perk said. “We also incorporated an independent service…often used by online casinos to ensure that everything is fair and transparent and provides guarantees that the winnings were random and not predetermined in any way.”

Fair though it may claim to be, however, top YouTube commentators including Daniel ‘Keemstar’ Keem, Ethan Klein of h3h3productions, and PewDiePie have all criticized Mystery Brand, Paul, and Le for promoting gambling to their young audiences, many of whom are presumably under the legal gambling age.

Furthermore, it turns out that if underage viewers are to make a purchase on Mystery Brand, the site’s Terms of Service state that it has the right to keep any money spent and simultaneously withhold any prizes won. The company’s rules affirm that Mystery Brand will “terminate […] the issuance of Your [sic] winning item with no refund of the amount spent on a mystery box” if a user cannot provide proof that they’re 18 — which makes it even more questionable that the site teamed up with YouTubers known to have young audiences. (The site’s age limit is not immediately apparent when a user creates an account, nor in its FAQ section.)

Other concerns about Mystery Brand’s service include the validity of its more expensive prizes. One box in particular caught the eye of critics after Paul and Le’s videos went live last week: a $12.99 luxe grab-bag that offered users the chance to win a Lamborghini, a $250 million mansion, or other less-expensive items. The Daily Beast subsequently discovered that the mansion that Mystery Brand had pictured for the prize was actually a $188 million Bel Air mansion it did not own.

Perk explained the discrepancy to The Verge, saying, “We do not need to physically own these cars or houses to include them as prizes in the box. If the user were to win such a prize, we would either offer them the exact money value of the prize, or our representatives would personally fly to the city of the winner and help them purchase the car or house.” The odds of a user winning the mansion were 0.0000018% — something Mystery Brand had listed publicly before pulling the $12.99 box from its website after The Daily Beast piece.

It’s worth noting Perk is the representative with whom a number of unhappy Mystery Brand customers report being in contact with after reportedly failing to receive their high-end prizes. On Reddit, some users say it has been months since they have won and their prizes either appear not to have been shipped out, or have been shipped with defunct tracking number. Perk rejected claims that Mystery Brand doesn’t deliver prizes, or that it delivers counterfeit brand items, which some Reddit users also alleged. Those claims, he said, are “completely untrue and unjustified.”

“Sometimes, shipping may take up to a couple of weeks,” he added, blaming streetwear seller StockX, which provides a large slice of Mystery Brand’s prizes. “StockX has a longer delivery time because each item is thoroughly checked for authenticity, and we would happily sacrifice delivery time to ensure our customers only receive authentic products of the highest quality.” For its part, StockX told The Verge that it was unaware of Mystery Brand’s existence and had not partnered with the site.

However, a company that was officially partnered with Mystery Brand, called G2A, announced on Jan. 4 that it had cut ties with the site. G2A is a digital marketplace and payment service that accepts various payment methods and currencies. It was processing transactions for Mystery Brand, but severed its agreement because “we recently discovered they made changes on their site, and also changed their business model, without notifying us,” a G2A representative told Newsweek.

Since the backlash against their respective videos, Paul and Le have both addressed the matter publicly. Le released a video saying his manager secured the Mystery Brand partnership for him and that “I don’t even think it’s a big deal.”

Le calls attention to other YouTubers who have promoted Mystery Box apparently without backlash, including Guava Juice (12.8 million subscribers), who uploads slime and toy-themed videos, and Morgan ‘Morgz‘ Hudson (7.4 million), who’s actually underage himself at 17. (Hudson’s video has reportedly been pulled dow by YouTube for violating its policies.) “Guava Juice has more subscribers than me — why is no one talking about this guy?” Le says.

At the end of his video, he apologizes and hands out a number of Amazon gift card codes (all of which have since been claimed).

Paul responded to Klein’s callout tweet and video, saying, “Lol love this vid,” to which Klein shot back, “You loved being called out for selling a gambling scam to underage kids? K.”