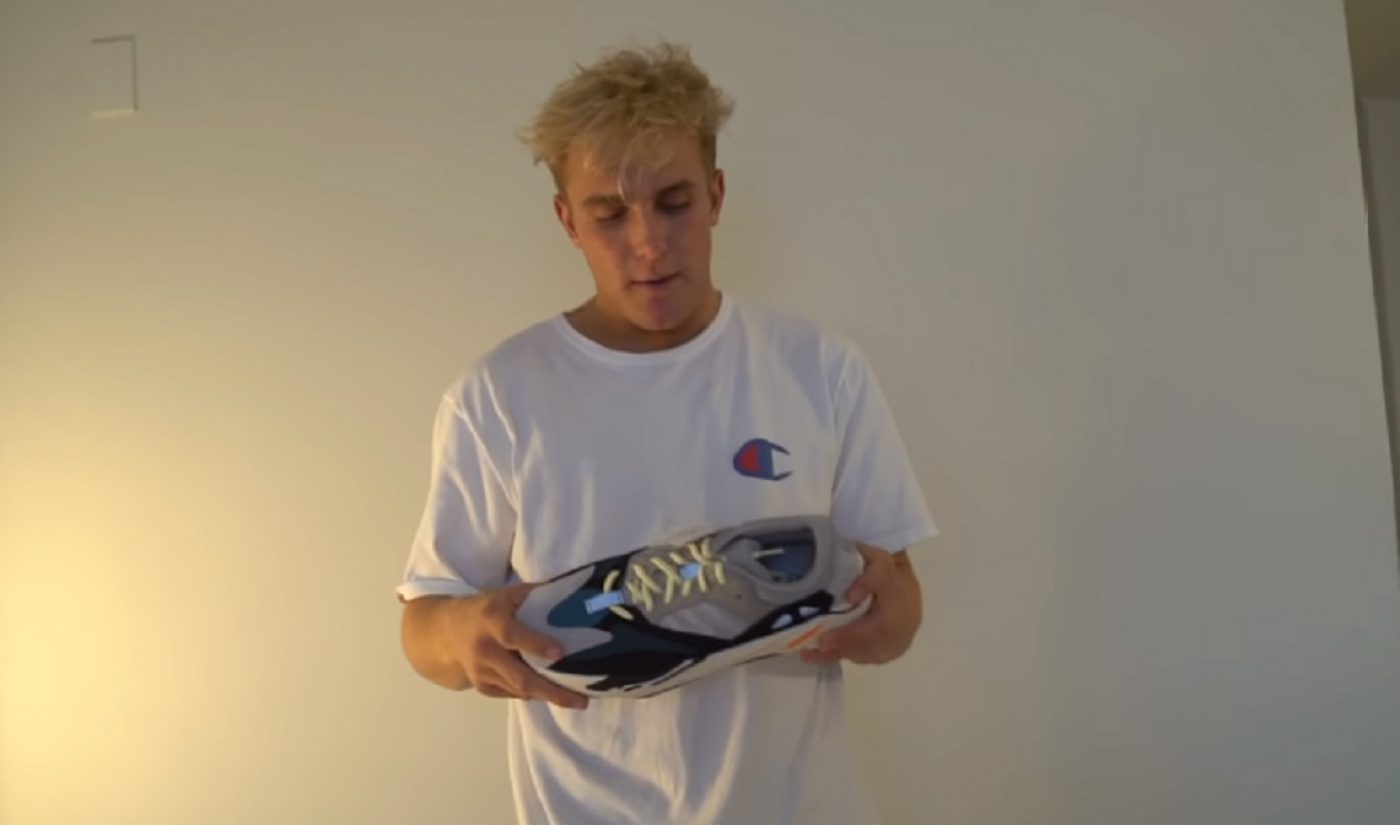 Massively-followed YouTubers Jake Paul (17.6 million subscribers) and RiceGum (10.8 million) are facing criticism after promoting MysteryBrand.net — which offers a service some say is akin to gambling — to their young viewers.

The site is akin to loot boxes in video games, where gamers can spend in-game currency or real-world money to crack open a virtual box that can contain a variety of goods, from common to rare. Its service is also reminiscent of YouTube’s popular ‘mystery box’ trend, where creators blindly purchase, often for large sums of money, boxes from sites like eBay and unbox their unknown contents on camera. With MysteryBrand.net, users select a box online and are able to see what could potentially be inside, then pay a flat price to ‘open’ it digitally, revealing what item or items they’ve received.

In Paul’s sponsored video, he pays $99.99 multiple times to open a box that could contain high-priced shoes, like Kanye West’s Yeezys. Paul does end up winning both Yeezys and expensive Nikes — but only after dropping hundreds of dollars and ‘winning’ a few pairs of lower-priced Converses and Vans. MysteryBrand.net allows buyers who don’t like the item they unboxed to ‘sell’ them back to the site, and Paul’s Converse and Vans wins netted him about $20 each when he sold them back.

In his video, RiceGum — aka Bryan Le — recounts to viewers How I Got AirPods For $4. And while Le does win Apple AirPods (worth around $150) out of a small $4 box, he also spends hundreds of dollars ‘winning’ items that are far less valuable — like Paul — than the potential ‘big ticket’ prize. (Paul’s video is tagged #ad, but Le’s does not use the hashtag, though he does state in his video that he partnered with MysteryBrand).

Fellow YouTuber Daniel ‘Keemstar’ Keem, who runs the YouTube channel DramaAlert, first called attention to the duo’s videos in a series of tweets. He revealed that MysteryBrand.net had offered him $100,000 to promote the service, but he turned it down given his moral qualms with promoting a service akin to gambling.

So it’s clear now a bunch of videos will be coming out starting tomorrow calling out @jakepaul & @RiceGum for promoting a Gambling site to kids!

Furthermore, commenters on both Paul and Le’s videos allege that MysteryBrand was a “scam” that didn’t deliver the goods it purported that users had won. One viewer noted that when Le got his winnings shipped to his house, the pair of Nike Air Max 97’s he’d won online, worth around $225, were replaced with Nike Off-White Air VaporMaxes, worth around $725 — with the suggestion that he may have gotten an amped-up version of the service for the sponsored video.

“Jake, I tried this website and I completely got scammed out of a large amount of money,” another commenter wrote. “I am very upset to see that you would be sponsored by a company that scams people out of money.”

“No amount of money would be worth me promoting a scam to you guys,” Keem also tweeted. (Keem, along with most-subscribed-to YouTuber PewDiePie, previously called out YouTubers including Shane Dawson back in October 2018 for promoting the online therapy site BetterHelp, which users alleged was underdelivering after charging them for unlimited access to licensed mental health professionals).

As The Daily Dot points out, there are a handful of Reddit threads as far back as September 2018 with people questioning whether MysteryBrand’s gambling components are rigged.

Neither Paul nor Le have responded to any online criticism. [Edit, 9:22 p.m.: See below for Paul’s comment.]

people stop trying mysterybrand web for the mystery box, i feel like is all scam. All the youtubers are stupid enough to promote them. Stay away ⚠️⚠️⚠️ pic.twitter.com/4zvoRVqBeU

@pewdiepie bro we need you, millions of 9yr olds are getting scammed by @RiceGum, @jakepaul and other big social media stars, bc they are promoting this gambling site called Mysterybrand. You can tell that these videos are fake. You need to make a video about this.

This is not the first time Paul has been in trouble for controversial promotional tactics aimed at his young viewership. Back in September, Nerd City released an expose alleging that his relentless hawking of merch to kids was so aggressive it could violate laws that limit the amount of advertising aired during children’s programming.

Ethan Klein of h3h3productions has uploaded a video about Paul and Le’s MysteryBrand promotions, calling them “a nice little gambling scam.”

Jake Paul & RiceGum are running a nice little gambling scam to usher in the new yearhttps://t.co/nKLHjnq3KU

You loved being called out for selling a gambling scam to underage kids? K https://t.co/mWsJGnnZ4j

Correction: A previous version of this story reported that the site Paul and Le promoted was ‘MysteryBrands.com.’ The correct URL, reflected in the updated story above, is ‘MysteryBrand.net.’