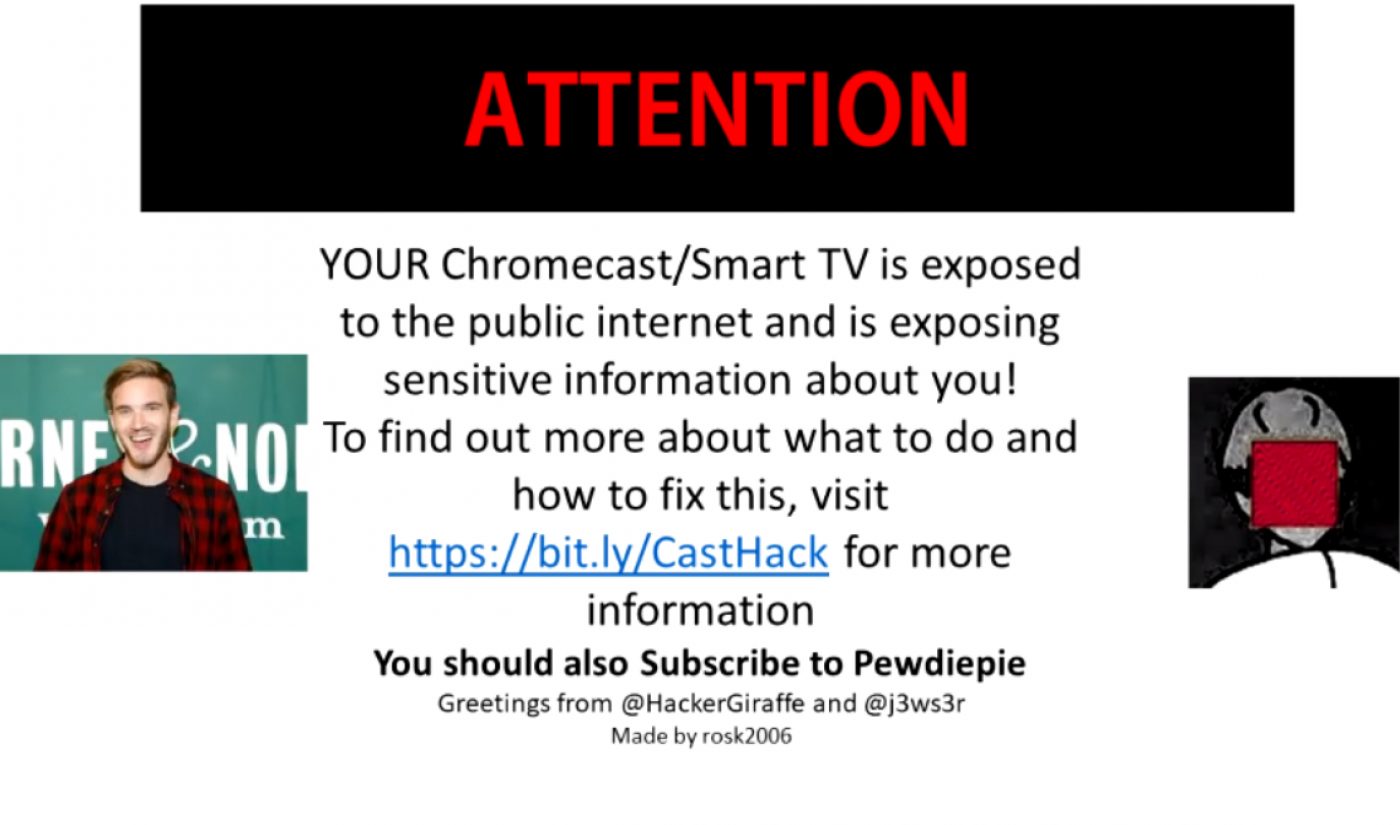 The pro-PewDiePie printer hacker is at it again.

After rigging a number of printers in Canada and the U.S. to spit out “subscribe to PewDiePie” flyers back in November to support the vlogger in his battle to stay YouTube’s No. 1 most-subscribed-to creator, the person calling themself ‘Hacker Giraffe’ has drafted more than 5,500 smart TVs, Google Home devices, and Google Chromecast streaming devices into the PewDiePie army, per CNET.

Hacked devices push a message that reads, “Your Chromecast/smart TV is exposed to the public internet and is exposing sensitive information about you!” before telling users, “You should also subscribe to PewDiePie.”

(The message also purports to offer users a link to information about how to sew up the fault in their device’s code that allowed it to be hacked, but the link, as is typical with internet prankery, actually leads to Rick Astley’s song “Never Gonna Give You Up.”)

As with their printer prank, Hacker Giraffe says this hack — dubbed ‘CastHack’ — is both to boost PewDiePie’s sub count and to raise awareness about how people’s devices can be vulnerable. “We [Giraffe and partner in hack ‘j3ws3r’] just want to have a bit of fun while educating and protecting people from open devices like this case,” Hacker Giraffe told CNET. “I like PewDiePie, and so why not?”

They added that their original scan looking for exposed smart TVs, Google Homes, and Chromecast devices revealed 123,141 prime for hacking. A thread on Reddit has several users reporting the hack’s message appearing on their TVs.

Hacker Giraffe also told CNET how people can fix the issue (no rickrolling this time): change their router’s settings to prevent it from forwarding network traffic to ports 8008, 8443, and 8009.

PewDiePie responded to news of the hack with a simple tweet:

This is actually the third hacking incident related to the PewDiePie versus T-Series fight. In mid-December, a group of people (Hacker Giraffe and j3ws3r not among them) broke into the Wall Street Journal’s website and replaced a page of branded content with a message titled “WallStreet [sic] Journal Public Apology to PewDiePie” that urged people to subscribe to his channel.