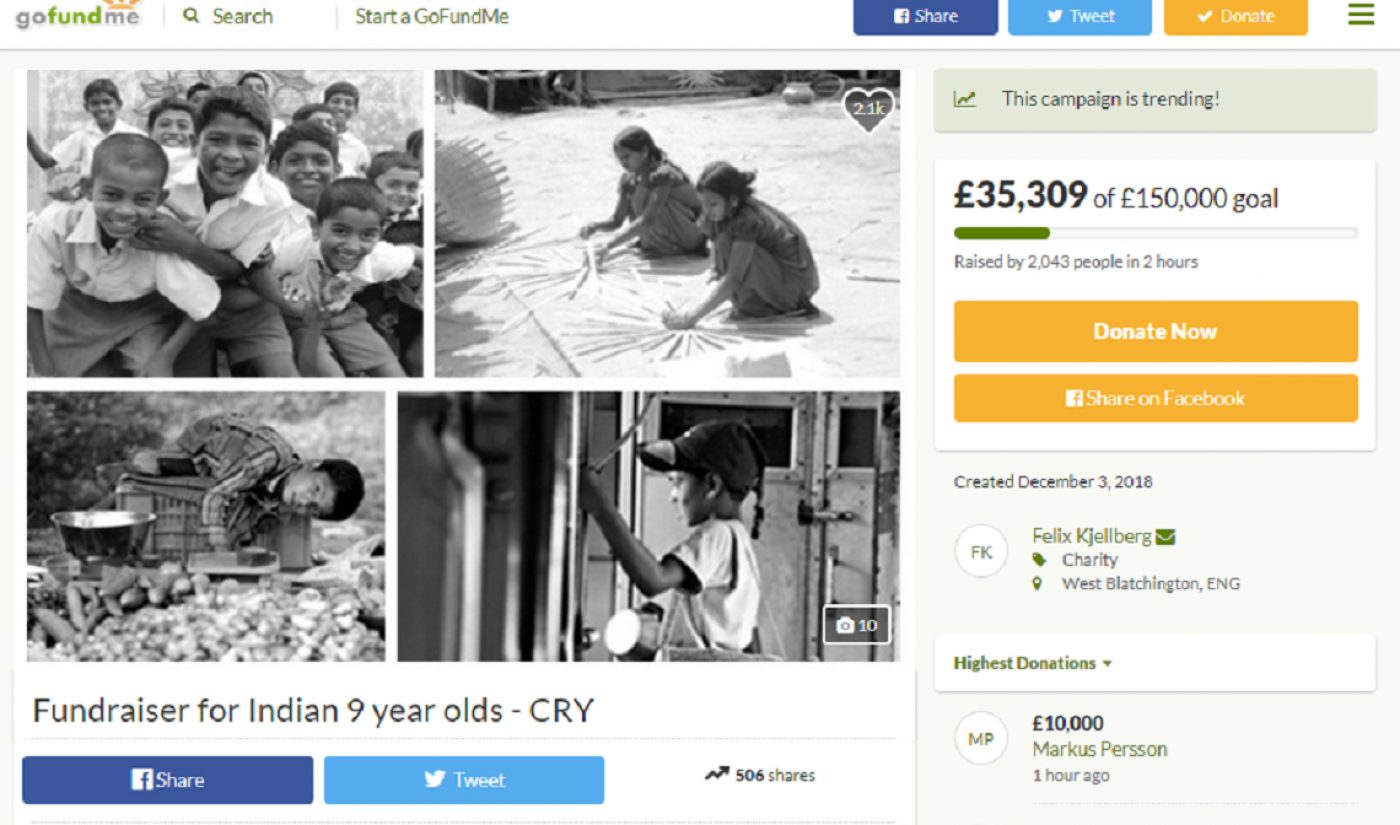 Top YouTuber PewDiePie, who’s currently in a hot and very popular contest with Indian record label T-Series for the most-subscribed channel on the platform, has started a GoFundMe to raise £150,000 ($190,938 U.S.) for Indian charity Child Rights and You (CRY). (Note: As of press time, CRY’s website is down, apparently due to the flood of traffic PewDiePie is sending its way.)

“Sometimes in these comments, you see comments like ‘f-ck Indians,’ […] just really distasteful, unnecessary comments,” he says. “And I obviously make Indian jokes and stuff like that, but I do that of all countries, and this is not what I’m about.”

PewDiePie’s had the title of No. 1 channel on the world’s largest video sharing site since August 2013, but he will soon relinquish it to the Noida, India-based music and film company despite a number of increasingly outrageous stunts hoping to keep Kjellberg on top. There’s simply too many people in India and too many companies signing those people up for internet service to allow any other feasible outcome.

Still, it’s fun to watch the race play out, and it’s giving all the parties a lot of exposure. Kjellberg knows this and wants to do something altruistic with his Bro Army (half-jokingly comprised of mostly 9-year-olds) before the whole thing is over.

“I’m getting more attention now than I’ll probably ever get,” Kjellberg says is in his video. “So why not just take that fact and redirect it to something more positive, and show that this fanbase […] can do something positive as well, because I know we can. No more ‘f-ck India.’ Instead, let’s help India.”

The campaign has so far raised about £40,400 ($51,417 U.S.). Of course, this is far from Kjellberg’s first charitable rodeo. He’s raised millions of dollars for various good causes, including $1.3 million for (RED), which supports people living with HIV and AIDS, $153,000 for charity: water, and $342,828 for Save the Children. And back before Maker Studios subnetwork Revelmode shut down, Kjellberg launched the network-wide charity effort #Revel4Good to raise money for Crisis Text Line.

You can check out Kjellberg’s video about his CRY fundraiser below, and can donate to CRY on GoFundMe.