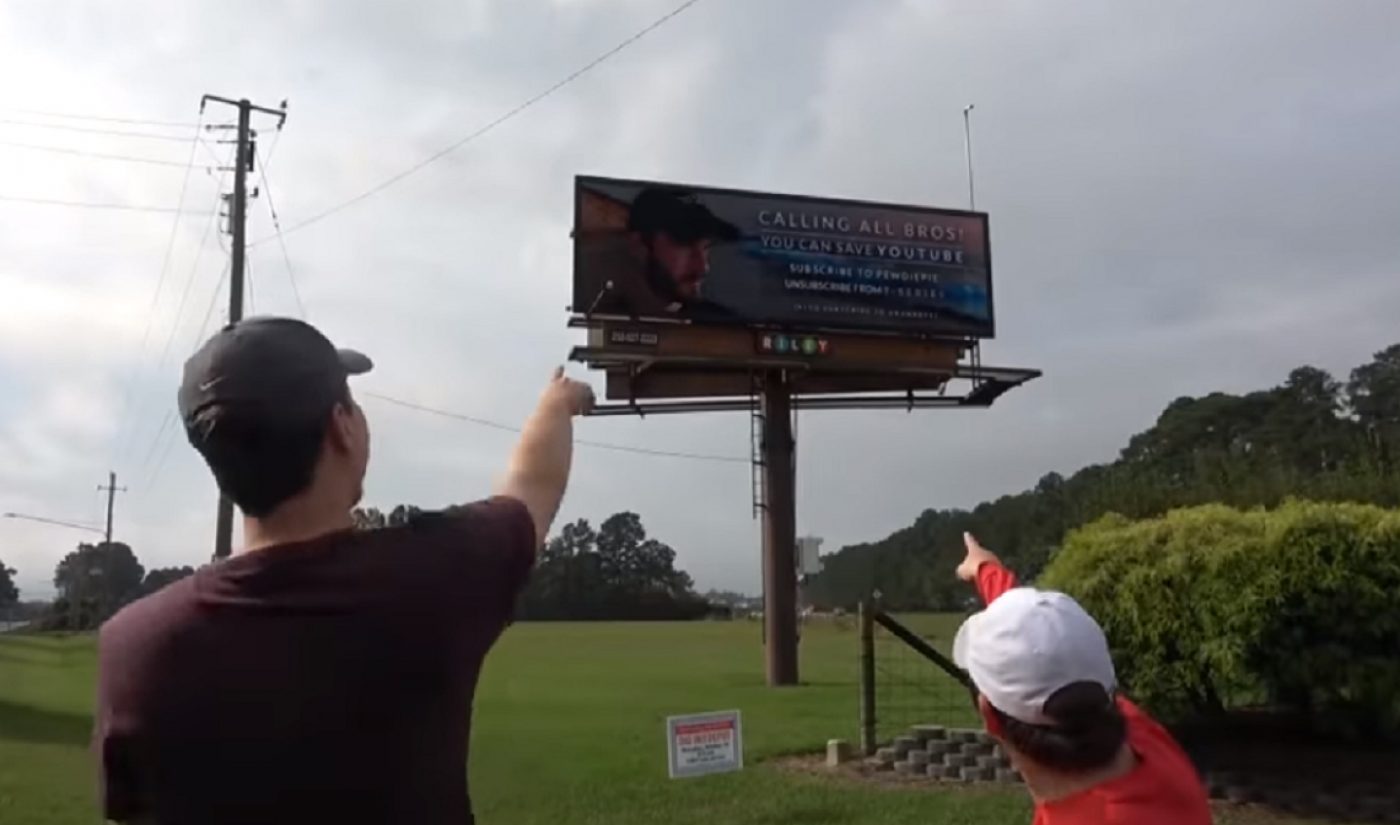 YouTuber PewDiePie, as has long been predicted, will lose his spot as the platform’s most-subscribed-to creator within the next couple of days, when Bollywood record label T-Series overtakes him. But one PewDiePie fan is not letting him go down without a fight: Jimmy Donaldson, aka ‘MrBeast,’ who purchased space on every billboard in his town to promote PewDiePie’s YouTube channel and keep him No. 1.

While Donaldson — who counts 10 million subscribers of his own — didn’t explicitly state why he’s gone to such great lengths for PewDiePie, he is known for videos where he throws around large amounts of money (usually by donating it to charity or giving it to strangers). He recently tipped a waitress $10,000, and, in a video posted yesterday, he played a game with random passersby at a college campus where every player won between $1,000 and $100,000.

“Calling all bros!” reads one of the billboards he bought. “You can save YouTube. Subscribe to PewDiePie. Unsubscribe from T-Series.”

In addition to buying the billboards, he plastered PewDiePie’s face on trucks, did local radio interviews, wandered around his town telling people to subscribe, put up flyers, bought banner ads on websites, and bought TV ads, radio ads, and bathroom ads.

PewDiePie, whose real name is Felix Kjellberg, has 68,222,598 subscribers at time of posting, while T-Series is nipping at his tail with 67,725,405. This year, PewDiePie has been gaining an average of 863,722 subscribers per month, per internal Tubefilter data. In the same time period, T-Series has gained an average of 3,653,642 per month. He has seen an uptick in subscribers since Donaldson posted the video about his efforts — which Donaldson pointed out on Twitter.

WE ARE TURNING THE TIDES OF THE WAR, PEWDIEPIE CRUSHED T-SERIES IN SUBS LAST HOUR!

PewDiePie addressed the closing gap between his channel and T-Series’ in a video last week, saying that while he “genuinely doesn’t care about T-Series,” he worries that the fact that it’s a large corporation — as opposed to an individual creator like himself — could push YouTube to court more companies and invite more corporate content. This, in turn, could push YouTubers to be more corporate-minded, he posits.

Check out the extent to which MrBeast went to keep PewDiePie on top below: