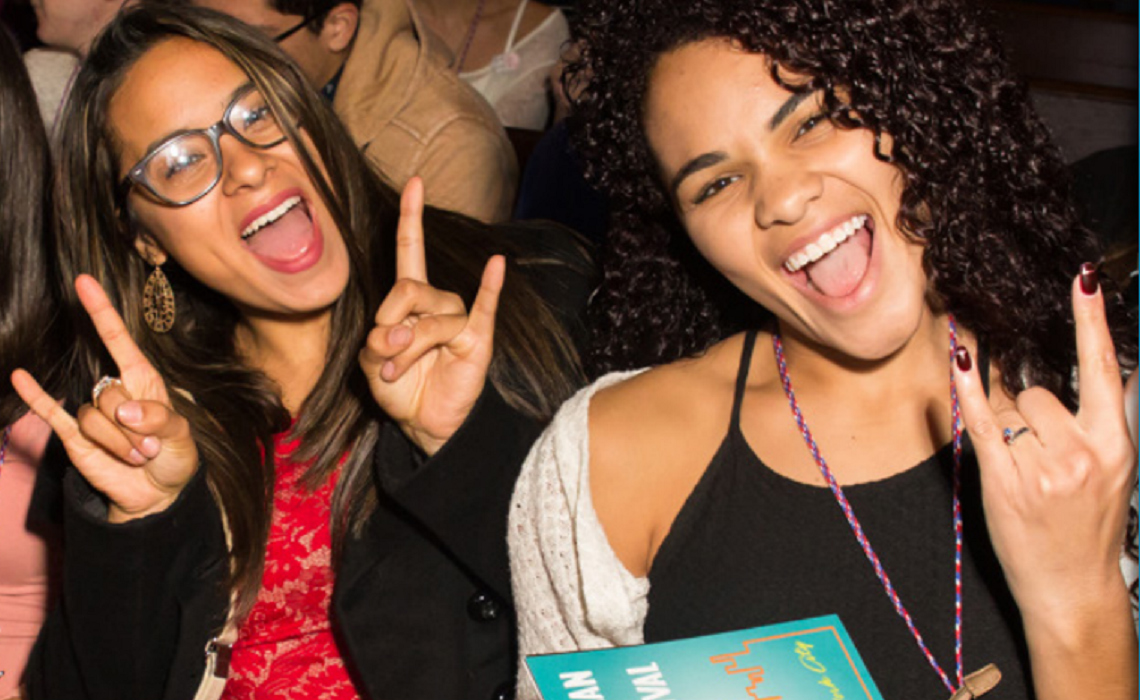 Thousands of high school students from around the world are about to pour into New York City not for the latest YouTuber pop-up shop or Supreme drop, but for the sixth annual All-American High School Film Festival.

Started back in 2012 by Tom Oliva and Andrew Jenks (whom you may recognize from his acclaimed documentary films and series Andrew Jenks, Room 335 and MTV‘s World of Jenks, as well as the fictional webseries It’s About a Girl), the festival has received tens of thousands of submissions filtered through a range of celebrity judges. This year’s no exception. Teen creators of more than 700 films will have their works screened and reviewed by peers, the press, and the likes of Eli Roth, John Oliver, John Legend, Kristen Stewart, Ed Burns, Brittany Snow, and Dylan McDermott.

The festival runs from Oct. 5 to Oct. 7, with screenings at the AMC Empire 25 theater in Times Square. Produced by the non-profit Crave Arts (also founded by Oliva and Jenks), and presented by IFC Films, The All-American High School Film Festival is open to the public, with day and weekend passes available.

For the students who made the festival’s films, the event is as much about building a creator community for the future as it is about celebrating how far they’ve already come, Oliva tells Tubefilter.

Industry professionals will run panels and workshops throughout the weekend, tackling topics like how tech is influencing the film industry and how to construct compelling storytelling. Friday’s opening night party will mix together live music and mingling with networking activities and educational presentations — including one from 2014 festival winner Kira Bursky, who will soon be launching Critiqr, a virtual workshop app for filmmakers.

“These students are begging for a community of like-minded people,” Oliva says. “It’s this big networking event where they get to just hang out with other people who share their passion.”

In 2003, Oliva was a high school teacher in Montrose, N.Y., with a background in theatre and speech when Jenks, then one of his students, approached him to see if he would act as the faculty supervisor for a student film club. By the time Jenks graduated, he had big plans for his next project. Inspired by his grandfather, who was suffering from dementia, Jenks wanted to embed himself in a nursing home and make a full-length documentary about the people living there.

“I told him, that’s crazy, we wouldn’t know where to begin,” Oliva says. “You know, go be a kid, enjoy your summer. But he was so passionate about it that I just couldn’t say no.”

Together, Oliva and Jenks spent a year sketching out the project, calling more than 500 nursing homes to find one that would let Jenks, then 19, come live there for the summer. At the end of that summer, Jenks had footage that would become Andrew Jenks, Room 335, which won numerous film festival awards and was bought by HBO.

With The All-American High School Film Fest, Oliva and Jenks want to foster that same sense of passion in today’s young filmmakers. Over six years, they’ve built the festival from between 300 and 500 attendees in 2012 to this year’s expected 3,000 to 5,000, and have awarded more than $1.1 million in cash prizes and scholarships.

The festival also gives students a chance to be seen by organizations like longtime festival supporter and digital content and creator development studio Collab (which has a roster of influencer partners including David Dobrik, Baby Ariel, and Zach Clayton). The company’s chief strategy officer Eric Jacks sits on the board of Crave Arts, tells Tubefilter, “Collab is always trying to find ways to work with and support the creator and filmmaker community. We can’t wait to see what this next generation of content creators come up with as they continue to explore new directions in storytelling.”

Oliva says that folks who aren’t convinced that a high school film festival can have the creative muscle of festivals for older, more established (and often much more well-funded) creators should come see students’ work for themselves.