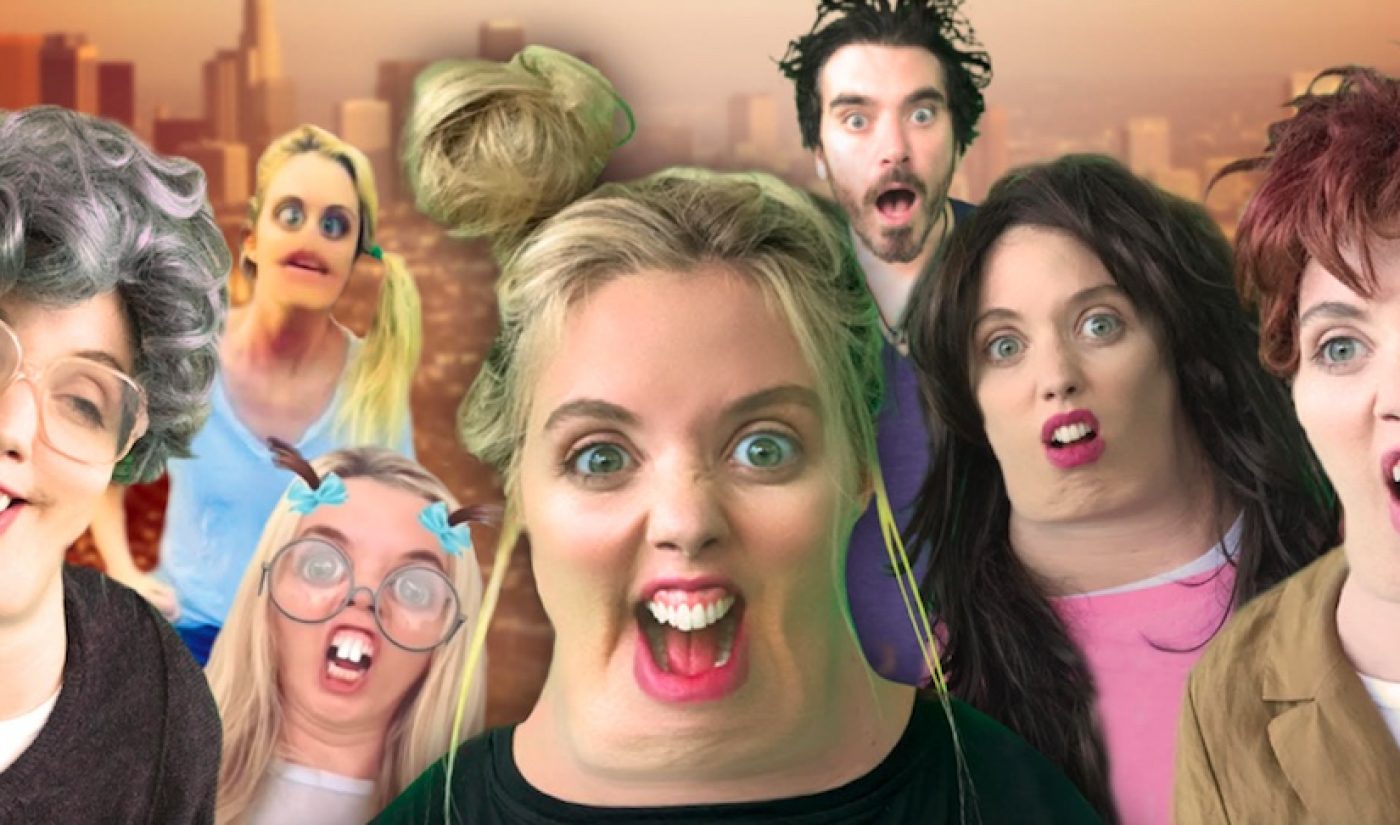 Like many prominent online influencers, Laura Clery didn’t plan to be anything like an online influencer when she started her career. But her path to fame might be even more indirect and unlikely than most who’ve become part of the “millionaires club” of influencers with huge followings.

Six feet tall and lean as the nightmares of a Weight Watchers executive, Clery has the build, blond mane, and big eyes of a model. But her passport to stardom came through a Snapchat lens that smooshes those model looks into square-jawed slacker Helen Horbath and a menagerie of equally misshapen relatives with whom Helen amusingly bickers during her Facebook Watch show Help Helen Smash.

Clery’s big viral moment came more than a year ago, when she recorded Helen pitching a relentless string of seriously awful/funny pickup lines in an attempt to flirt with “Stephen,” a hunky yet horrified English fellow who in real life is Clery’s husband of six years, musician and film composer Stephen Hilton. Further videos of Helen’s gross disregard for Stephen’s personal boundaries only boosted her popularity.

“The more disgusted he got, the more I had to do it,” Clery said. “They went so viral. That really took me over 2 million, 3 million followers.”

Now Clery has 3.5 million Facebook fans and another 1.5 million on Instagram, but only a relatively small presence on YouTube (about 260,000 subscribers), Twitter (only around 11,000 followers), and other outlets. The Help Helen Smash page on Facebook has 3.1 million followers of its own and is one of Facebook Watch’s bigger hits, enough that Facebook featured Clery at its booth on the Community exhibition hall floor during this year’s VidCon.

Laura Clery with her hair up.

But playing the Helen Horbath clan while recording on a smartphone was never really part of Clery’s long-ago grand plan for stardom. She grew up in suburban Chicago as the funny blonde who always made jokes.

“I always say it’s my only skill set,” Clery said. “I was the class clown. I think a lot of it is you’re born with it or you aren’t. It’s like singing. You can…sing or you can’t.”

Clery wanted to act, because that seemed like a thing funny people do. As soon as she finished high school, at 17, she headed to Los Angeles, and began the endless trudge to acting auditions.

“I got the first (role in a) commercial that I auditioned for, and thought, ‘This is going to be easy,’” Clery said. Turns out, not so much. “For every job you book, there’s like 2,000 jobs you don’t book.”

Five years later, Clery got a bigger break, when her two-line role for an episode on the network sitcom ‘Til Death morphed into a different, eight-episode recurring role as the daughter of Brad Garrett and Joely Fisher, thanks to her funny interactions with cast members during a table read.

Clery also tried stand-up comedy, another common path to fame for funny people, but embarked on that venture with a massive strategic mistake.

“I did my first open-mike night at the Comedy Store, which was a horrible idea,” Clery said. “I should have started somewhere out in the deep (San Fernando) Valley where no one would see me. I did three minutes. I was terrible. The guy after me said, and I’ll never forget it, ‘Looks, she’s a 10; Comedy, she’s a 2.’”

Clery soon decided that whatever her sense of humor was (she had used a monotone delivery in her stand-up routine straight out of the old MTV animated series Daria), it wasn’t made for stand up.

In 2013, Clery collaborated with Porsche Thomas – whom she’d met while they shot a Capital One commercial – to write, produce and star in a web series called Hungry. It followed two Los Angeles models in their 20s, trying to figure out what do for a living now that they were “too old” for their profession, and had no education or skills. The experience proved cathartic, giving Clery a chance not just to perform, but also to write and produce a series, and about an issue that affects many young actresses too.

“My first taste (of creating her own content) was Hungry,” Clery said. “I thought, ‘Wow, I love producing. I love creating. I don’t to be in someone else’s vision anymore.’”

That experience paved the path to something new for Clery and her husband, who also had want to evolve past a lucrative but limited niche performing with Oscar winner Hans Zimmer on dozens of film music projects such as Ocean’s 11 and Quantum of Solace.

“We didn’t own anything we made,” Clery said. “We wanted to transition to (being) content creators and producers.”

Though Clery was used to the big budgets, high-end technology and large crews of commercials and TV,  she had noticed that a lot of online influencers were using little more than their cellphones to create compelling content, while finding big audiences. So Clery and Hilton committed a year to creating material they did own. The initial response wasn’t encouraging.

“The first year, no one watched our stuff,” Clery said. “It was a very weird transition. I posted every day for a single year. I learned the language of the Internet. I can’t say for certain I know what a viral video is going to be. But I was able to grow and expand my audience.”

Helen’s character didn’t even have a full name when her “flirting” turned into Clery’s big break. Her followers eventually suggested just the right, slightly off-color family name. “I became really obsessed with her,” Clery said. “Who’s her mom? Who’s her family? It was just me shooting and editing and writing, playing five or six characters. But it’s just nutty the way people relate to this character.”

For all of Helen’s devoted following, it’s another of Clery’s characters, the vapid Internet singer Ivy, who provided her single biggest hit. “Mmmmm Potatoes.” (yes, it’s about Ivy’s favorite food in the world), released just about a month ago, now has grabbed a whopping 65 million Facebook views.

More amusing than the minute-long song may have been the seemingly straight-faced response by viewers and media to her satirical character’s song parody. Many wondered, to quote one post, whether Clery/May was  “dumb or just high,” a question even celebrities such as Tommy Lee and George Lopez seemed to ask even as they reposted the video.

Publications as far away as India wrote about it, though few seemed to understand Clery was making fun of  an entire subspecies of self-absorbed Internet celebrities, instead of being one from their clueless ranks. 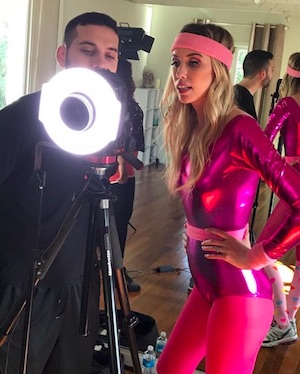 “She has all these characters,” said her manager, Larry Shapiro of Ensemble Digital Studios. “She’s Lucille Ball, she’s Carol Burnett, she’s Lily Tomlin.” All those shape-shifting female comedians, particularly Ball, were pioneers in TV and the broader popular culture. Shapiro argues that his client is helping pioneer a similar kind of character-driven sketch comedy for a new medium.

And while Clery maintains a regular schedule of writing, shooting and producing, she’s also trying to pioneer opportunities beyond Helen Horbath’s basement, diversifying her media initiatives in a thousand different directions.

She’s preparing to shoot a pilot with production company Jax Media later this year for Facebook, focused on yet another of her characters, Pamela Pupkin. Shapiro, a former CAA agent and Fullscreen and AwesomenessTV executive, was cagey about the show’s budget, but said it will be in line with spending on a cable TV show, (which is to say, an order or two of magnitude larger than the usual online short), as Facebook tries to move beyond competing with YouTube’s vast influencer ecosystem.

Clery, 32, is writing a book for Simon & Schuster, Idiot, (her own company’s name is Idiots, Inc.), which she promises will be “short, funny stories from my life,” rather than the typical autobiography from an online influencer barely old enough to remember the past decade. That too is due by year’s end for publication next year.

And there’s the weekly Laura Clery podcast, now 30 episodes in, including a recent sit-down with another big influencer who started as an actress, O.G. online star Grace Helbig. Clery still isn’t taking advertising on that, focusing on growing the podcast’s audience.

It’s been quite a year, and all thanks to one very square-jawed cellar dweller. Helen Smashed indeed.