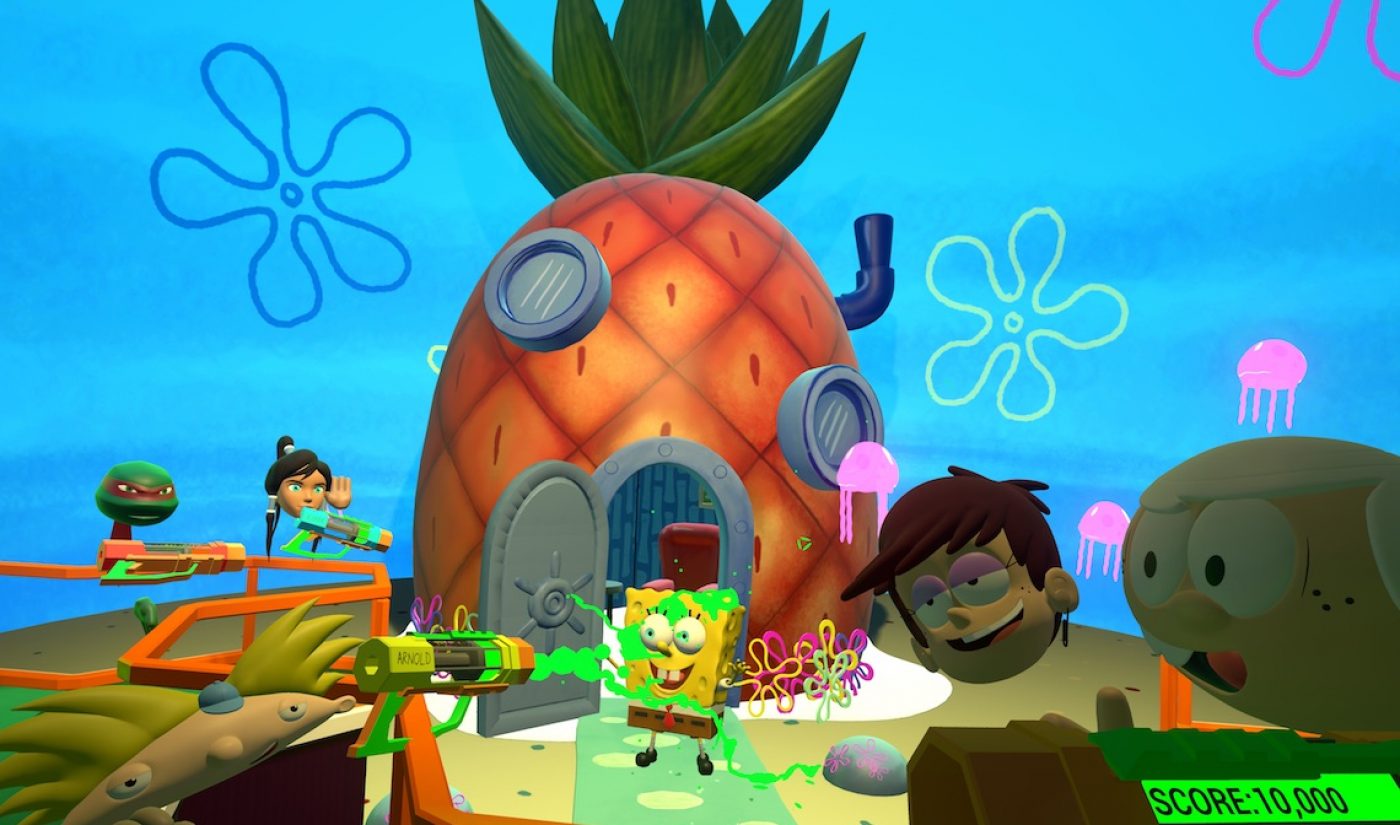 It’s always interesting to see how media/entertainment companies are remaking themselves in this fast-moving era to reclaim some of the young audiences that once made their businesses huge. When they partner up on such reclamation projects, it’s particularly interesing.

Thus, I leapt at the chance to try out Nickelodeon’s SlimeZone virtual-reality experience. It  just launched in the flagship location of IMAX’s new VR game center in Hollywood and two other locations in Manhattan and Toronto. The result is an eye-candy-coated first-ever collaboration between the most interesting divisions of both companies.

Yes, IMAX still has a few hundred jumbo-sized movie screens scattered around the country, in both museums and traditional multiplexes, showing both IMAX-commissioned material and special versions of big Hollywood movies. But the company’s best chance for significant future growth may be the IMAX VR centers it’s opening, mostly with partners, on three continents.

And yes, Nickelodeon remains one of Viacom’s core pay-TV brands, despite the near-criminal professional malpractice of former Viacom CEO Philippe Dauman. As Dauman managed up to a doddering Sumner Redstone while embarking on stock buybacks to shore up share prices, innovation withered. So too did audiences, especially for Viacom’s iconic youth-oriented brands such as Nickelodeon and MTV.

Under Bob Bakish, Viacom is slowly trying to become relevant again to a new generation of tech-savvy kids largely indifferent to the charms of ad-supported linear TV.

Bakish has made MTV and Nickelodeon two of the company’s six core brands and is investing heavily in them.

Viacom is also bringing in help. In recent months, the company bought VidCon, the mammoth online-influencer convention, and WhoSay, the online-influencer marketing platform. Someone, finally, noticed that traditional TV brands need to find new ways to engage with their no-longer captive audiences.

Which brings us to the SlimeZone, Nickelodeon’s first VR experience and the result of two years of work that also included this month’s launch of an amusing mobile app, the free augmented-reality “Do Not Touch” button (also found in the SlimeZone experience). Of course you push the button, and of course you get virtually slimed, a digital representation of Nickelodeon’s signature goop.

In the IMAX VR experience, you’re furnished with an Oculus Rift headset and hand controls that allow you to wield a slime gun, grab ping pong paddles, basketballs, and paint tubes, or teleport quickly across the space. Various Nick star characters, such as SpongeBob SquarePants, pop up in various nooks and crannies.

Check out the trailer to get a 2D glimpse of the experience:

“It’s all about being everywhere kids are,” said Chris Young, the senior vice president over Nickelodeon’s Entertainment Lab, which produced the experience. “They love being able to connect wherever they are.”

Up to six people can play in the SlimeZone at a time, though the Hollywood IMAX VR is set up for only two at a time. The space can be reconfigured to accommodate additional players, instead of half a dozen other offerings the center also is running, said Bryan Kurtzman, an IMAX VR associate. Players in other IMAX VR centers also can join in remotely.

In truth, the experience is fun and visually stimulating, but would be better if it allowed even more than six people at a time.

The SlimeZone is a vast virtual space (Young estimated the various floors and rooms cover a virtual 100,000 square feet). It’s easy to imagine a batch of kids in a birthday party merrily blasting each other with virtual slime as they move around the huge space and try the other experiences on offer. That may come in the future, as the companies see what works and doesn’t for actual audiences.

But as Young sanguinely put it, “all this stuff is about learning and trying to figure out where the tech is taking us. We’re early days as this technology continues to grow and those opportunities exist to try new things.”

Nickelodeon is also working on another VR project with Dreamscape Immersive, in which Viacom also has invested. That project is “pretty far along” in development (though Dreamscape itself has yet to open anything more permanent than a pop-up in a high-end Los Angeles mall).

The project serves some other uses too.

“This new VR experience will also show the creative community how we are using technology to create unique forms of entertainment for all ages,” said Nickelodeon Group President Cyma Zarghami in a release.

For IMAX, the partnership provides its VR centers with a family-friendly experience using beloved brands that can be a useful alternative and complement to the more intense and adult-oriented titles it’s offering, such as Survios’ sci-fi shooter Raw Data.

Given the giant hole in Nickelodeon’s Dauman-bedeviled past, where too little was tried even as the TV landscape shifted in near-apocalyptic fashion, trying something new that might appeal to young audiences is a welcome next step for both Viacom and IMAX.