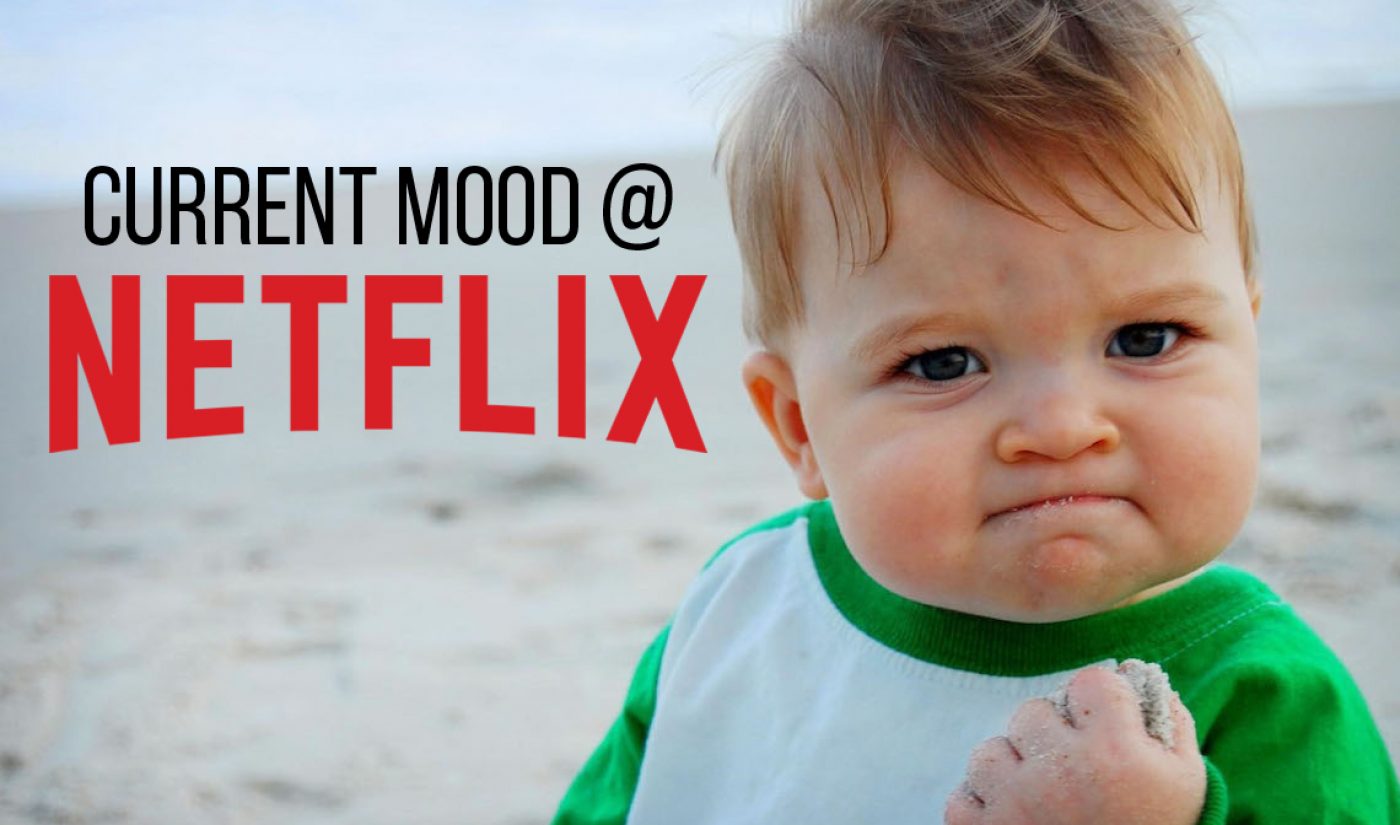 Amid all the hangover headaches hitting most of the big digital powers lately, one FANG was noticeably not bumbling along in one or more stews of its own making. And this week, Netflix showed just how far out of the stew it really is compared to Google, Apple, Facebook and, to a lesser extent, Amazon.

I mean, did you see that quarterly earnings announcement on Monday?

The company reported roughly 8 million new subscribers, pushing it to 110 million worldwide, and more than $3 billion in revenues. Investors were so tickled they pushed the company’s market capitalization above $100 billion for the first time.

And if you missed the earnings announcement, how about what happened less than 24 hours later, in the pre-dawn hours Tuesday in Los Angeles, where the Oscar nominations included four for Netflix original film Mudbound, including its first outside of the best documentary category.

In a year (finally) of more inclusive nominations, Mudbound was a major beneficiary. It had the first-ever Cinematography nomination for a woman, Rachel Morrison. Hip hop queen Mary J. Blige scored two nominations, for best supporting actress and as one of three writers of a best song nominee. Finally, Dee Rees, the film’s African-American gay female director (and a gamer!) was nominated, with Virgil Williams, also an African-American, for best adapted screenplay.

It’s a good time for Netflix to make this kind of headway on both the financial and prestige fronts. Two of its biggest competitors – Amazon and Hulu – are busy rebuilding their executive ranks after major departures at the end of last year, though neither is sitting on their hands.

Hulu has rolled out a big ad campaign in support of, well, everything it’s doing, from its huge library of current TV shows to its skinny bundle of live programming to its original shows like Emmy winner The Handmaid’s Tale. And Amazon, even with half a dozen executives gone since September, is embarking on a $250 million prequel series to Lord of the Rings that should have fans twitching with anticipation.

Apple, another expected competitor, keeps announcing new executives and new projects (apparently, they’ve acquired Reese Witherspoon as a wholly owned subsidiary) but still hasn’t bothered to tell us how we’ll get to see any of this. At least Apple finally gave a release date (Feb. 9) for its HomePod, the long-in-coming smart speaker powered by its Siri digital assistant. Maybe we can use the HomePod to listen to the audio from Reese’s new shows.

Meanwhile, Disney will spend the next 18 months rolling out an ESPN streaming service and a Netflix competitor featuring its movies and shows, while also trying to get regulatory approval to buy big parts of Fox (including enough of a stake in Hulu to give it majority control).

While the Fox deal is an audacious, rather brilliant stroke to beef up Disney’s streaming offerings, it’ll provide lots of distractions for months to come. One of the biggest may be trying to figure out what to do with Hulu.

In the meantime, Disney this week hired Kevin Swinton, a former Samsung and iTunes Store executive, to run the new streaming service. Disney also said it would price its service “substantially below” Netflix, and include limited advertising or sponsorships. On the original programming front, Disney said it plans to make three to four movies per year for the service, plus original series such as a reboot of High School Musical. Finally, an appropriate outlet for Zac Efron’s Hollywood ambitions!

And beneath Netflix’s impressive topline numbers, there were some interesting tidbits worth noting.

The company wrote off $39 million in production costs for what was described in its shareholder newsletter as “content we’ve decided not to move forward with.” The write-downs aren’t unusual, CFO David Wells said, but these, “related to the societal reset around sexual harassment,” were unusually large. It’s important to note that the $39 million represented a little more than 1% of the site’s quarterly revenues.

As it was, most observers presumed, reasonably, that these costs were related to Netflix severing ties on projects with Kevin Spacey, Louis CK, and Danny Masterson after a wide range of sexual-misconduct allegations surfaced against each of them. The write-offs represent one of the first tangible accountings of the downsides of dealing with People Who Do Crummy Things. They provide a window into the economic disruption caused by the “societal reset,” as projects from a large group of new pariahs are halted, reshot, abandoned or otherwise left in limbo.

For those wanting a happy ending to their moral tales, it’s useful to note another bit of news from the Oscar announcements. A separate former Spacey project, the feature film All the Money in the World, grabbed a nomination for Christopher Plummer, who replaced Spacey in time for last-minute re-shoots that managed to allow the film to make voting deadlines.

Speaking of uplifting stories, Bright, starring Will Smith and costing $90 million to make, was savaged by critics, most of whom, Netflix noted this week, were U.S.-based and writing in English. Despite the critical vituperation here in the States, Bright became one of the most viewed in Netflix history, executives said.

So much for critics, especially when it comes to making projects that appeal to a global audience of 110 million households (roughly equal to the entire United States) speaking multiple languages. Not surprisingly, Netflix has ordered a sequel.

More consequentially for Netflix (and its competitors) were two other numbers. The company has now adjusted the bottom end of its range of intended content spending, from $7 billion to at least $7.5 billion this year. The company said the top end remains $8 billion, partly for a mind-boggling 80 films.

That works out to an original film release every 4.6 days. Perhaps then, it’s not so shocking to hear the company say it plans to spend $2 billion on marketing. It’s about time the company did a better job tooting its own horn.

I, for one, welcome the move. I keep running across Netflix originals that I have never heard about, including some called “hits,” however that may be defined for a company that doesn’t care about box office or ratings, and doesn’t release viewership data.

Finally, with a little help from Netflix marketing, I’ll find more of those shows. And yes, I’ll savor the irony of Netflix spending marketing dollars with semi-competitors such as Google and Facebook so I can watch more of what I want. It’s just part of what Hollywood looks like these days.