YouTube Millionaires: Sam And Colby Look To “Explore Everything” As Their Channel Grows 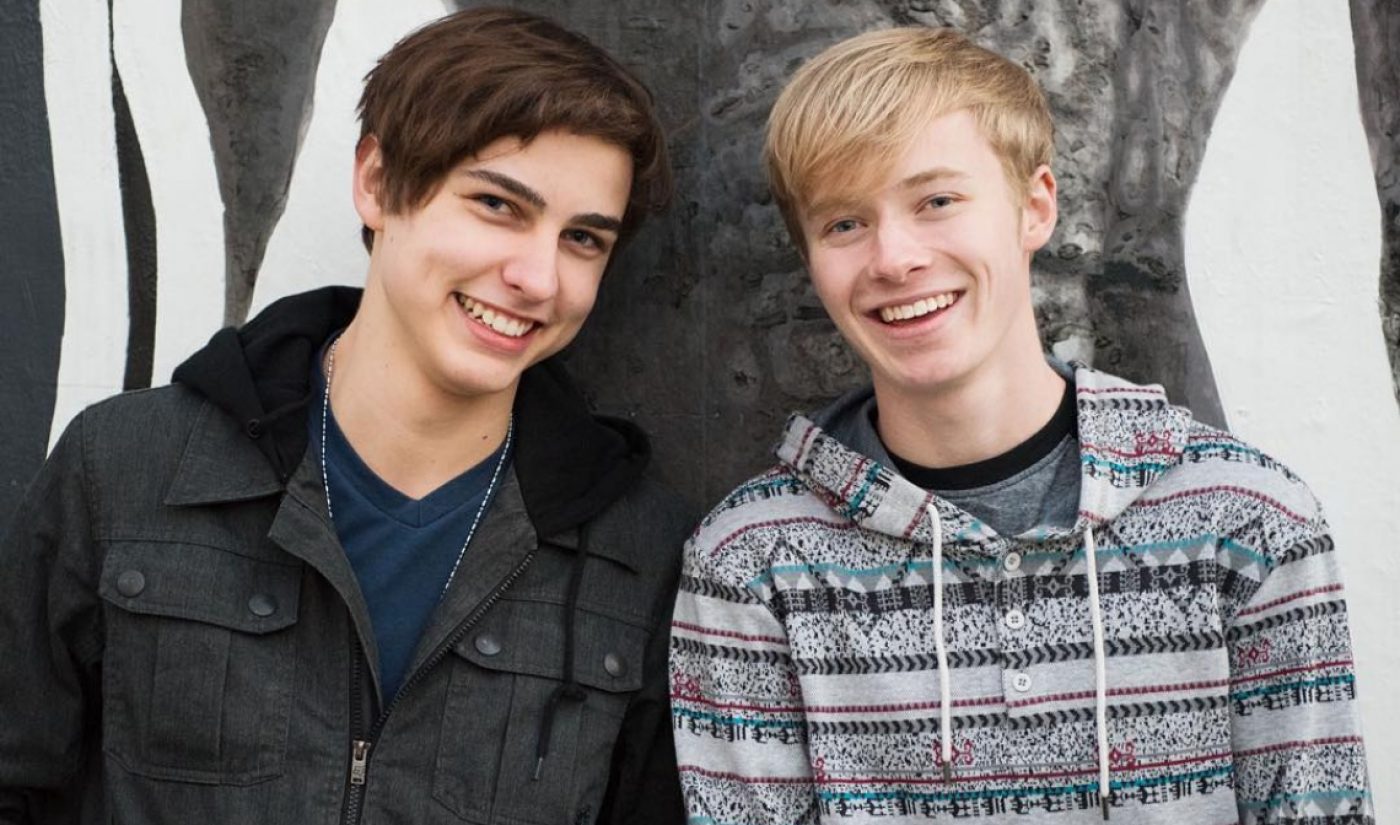 As Sam Golbach and Colby Brock acquire an audience online, they are eager to continue exploring.

The two best friends, known collectively as Sam and Colby, have become known for their urban exploration videos, in which they check out closed and deserted areas. Their overnight stay in a local mall earned them more than 4.1 million views on its own. When combined with a regular complement of vlogs and a following that began on Vine, Sam and Colby’s adventurous spirit has allowed them to surpass one million YouTube subscribers. Here’s our chat with them:

Tubefilter: How does it feel to have one million YouTube subscribers? What do you have to say to your fans?

Colby Brock: It was insane to see that big number of one million, but it felt like a lot of the other milestones. In the end, it’s another number.

Sam Golbach: One million is awesome and it’s really cool to say, but like Colby said, it’s not about the specific number, we are still going to be grinding and still going to be doing videos just like we have been. We do it for the fans, not for the numbers. And to the fans I want to say thank you! It’s a huge accomplishment don’t get us wrong, but we are just as thankful for our first 1000 subscribers as we are for our one-millionth subscriber.

TF: Where do you get new ideas for videos? Are your fans involved in that thought process at all?

CB: Since that our channel is mostly exploring abandoned places, we never have had issues in the past figuring out WHAT we need to film. Usually we will both sit down at the beginning of the month, and start researching places we could potentially go explore…plan it out that way. Yes! Sometimes if we are away from home we will send out a tweet asking if they know any places around them we could check out. Sometimes we don’t even have to ask. Everyday my DMs are full of people telling me where abandoned places are near them.

SG: Fans email, comment and tweet us different locations (usually from their own towns) for places we should explore which is very helpful. We have had to do a lot of research to find abandoned places to explore recently.

TF: What do you think are some features you’re looking for in the abandoned areas you visit?

CB: The scary factor is super important, but mostly if it’s easy to get into without getting caught.

SG: The main thing is how big it is. The more space/room there is to make content the better… can’t really make a movie-quality video in just a one room place.

TF: Are there any creators who have influenced your urban exploration videos, or do you think of yourselves as wholly original?

CB: We think of ourselves as original because we put a bit of a comedy twist on the exploration videos rather than having it more like a documentary or solely exploring the place. We want to put our personalities in the videos as much as possible, which is pretty unique to the exploration genre.

SG: Well we used to do urban exploration a lot in our hometown just for fun with our friends! So the fact that all we needed to do was add a camera to our own way of having fun makes YouTube pretty easy. And I haven’t seen many other people do this type of exploring with commentary like we do on YouTube, there are a few copycats just because other people have seen us, but I think we were original in our exploration content.

TF: What was the most interesting part of your overnight stay at the mall?

CB: When Elton came out saying he had a gun pointed at him, that was pretty interesting to me.

SG: When the policeman came out and said he had cameras in there that were watching us the whole time that was interesting… made me think that other places we have explored had security like that and were watching us.

TF: You have a playlist called “Dumb Ideas.” What do you think is the single dumbest idea you’ve posted on YouTube?

CB: Probably us jumping in an electric powered bouncy house while it was in the pool. Super dangerous, don’t try this at home kids.

SG: Probably the world’s largest cereal bowl in our living room…because that really ruined our apartment, wasted food, and was such a random idea that not all that many people watched it when it first came out.

TF: How did getting your start on Vine influence your online video career?

CB: We just ultimately decided to do something different with our lives and wanted to become famous back in the day. Made a Vine called “Following Fat People” which cause a lot of controversy resulting in us gaining a stupid amount of followers in a small amount of time. Took the leverage that we got from the new eyes to our channel, and were able to grow from there.

SG: Seeing that we were able to make money and a name for ourselves off of six-second videos kinda showed us that we should always stick to video content to keep our career alive. Because they were so easy to make, we were able to gauge what trends, controversy, and relatable factors we needed to make longer video formats work on other platforms. Vine was our practice.

TF: Has your digital success had any effect on your real life friendship?

CB: Yes, it has. Running a business together can be very tough, but we have ALWAYS been amazing at communicating with one another, and figuring out what to do if a situation is bad. Sure, we have arguments like any normal best friends would, but we have learned to separate our business life with our friendship…it’s just easier that way.

SG: As Colby said, any friendship that runs a business together is going to be hard. But in the end I think it helped us so much. Taught us about communication, business, how to deal with people, and made us respect each other a lot more in the long run. But by no means was it easy.

CB: Mostly finding new abandoned places in brand new areas that we have never been to (new states, even out of the country). That’s always fun.

SG: Hopefully we can start traveling the world or at least the country to explore everything. I always love seeing different places and what they have to offer. Up until now most of our exploring videos have been in our own towns.