Insights: Amid VidCon’s Tween Fan Hordes, Signs Of A Business Growing Up 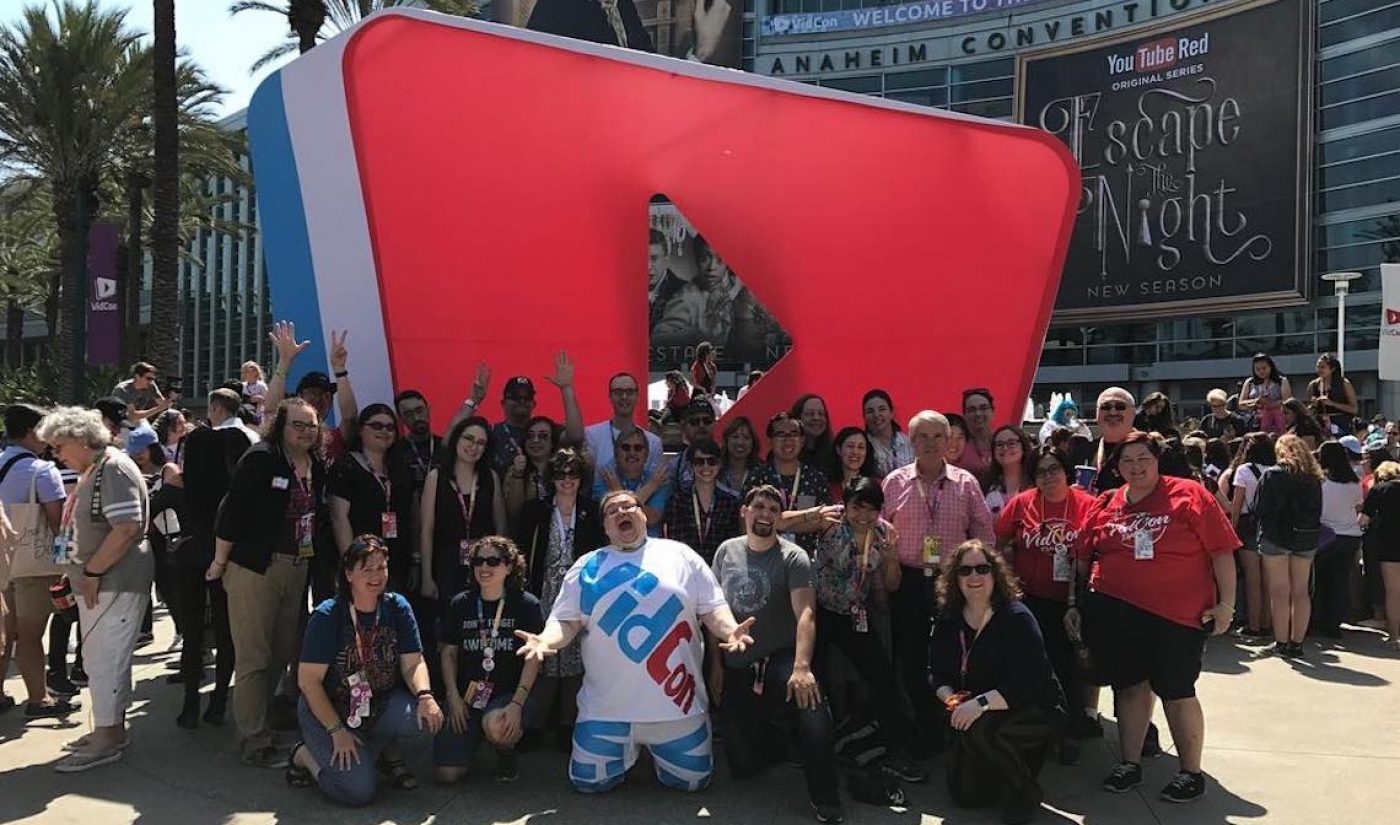 The relatively controlled chaos that was VidCon last week provided a useful opportunity to assess the state of the digital-video business, bringing together 26,000 industry insiders, ambitious creators, and occasionally bonkers tweener fan hordes for days of conversations and activations and rank commercialism.

Out of it all I think I can declare, with some growing measure of confidence, that this digital video thing might actually, someday, become a nice little business. I jest. It’s huge already. And it’s clearly now a fixture of the zeitgeist, so large that trend-sniffing big brands are flocking to the show and to the industry as a whole.As annoying as it can be sometimes, when someone hasn’t experienced the space or talent, to see that sort of

“It did feel like last year VidCon became officially like (San Diego) Comic-Con,” said Matthew Henick, head of BuzzFeed’s motion picture group. By that, he meant (as do I) that big brands finally decided they needed to be there, because the audience is too big and too important to the brands’ futures. It was even more the case this year, by about every measure imaginable.

VidCon sponsors included not just online media companies from YouTube on down, but also traditional entertainment conglomerates such as NBCUniversal, Nickelodeon, and Disney. Walmart, Shopify, and Amazon were there, as were NYX makeup, Taco Bell, M&Ms, SweeTarts, Snickers, Hubert’s Lemonade, Mattel, and Hasbro, along with tech providers such as Canon, Kodak, JVC, Adobe, and La Cie.

Just about all those brands had elaborate booths on the sprawling exhibition floor, part of efforts to connect with both the influencers and the influenced. And the business has gotten big enough that quite a number of online performers had their own merchandise booths at the show, selling their lines of books, makeup, T-shirts, posters, general positivity, and so much else.

Josh Lowcock, head of digital for big ad buyer Universal McCann, said he brought dozens of clients to the show, mostly so they could personally experience the visceral impact of the show and its fans. “Here you get to see how passionate and engaged those kids are,” Lowcock said. And his company has gotten engaged, too. It committed $250 million in client spending to the Google Preferred ad network.

That VidCon now matters to advertisers and brands also creates problems. Digital media executives now must choose whether to be in Anaheim, for VidCon, or France, where the world’s biggest advertising gathering, Cannes Lions, was going on simultaneously.

Buzzfeed’s branded entertainment unit sent many of its people to Cannes, said Henick, because so much Buzzfeed business is built around branded/sponsored/native content. But Buzzfeed had plenty of people in Anaheim too.

For some companies, like Henick’s, the conflict meant split teams and lots of frequent flyer miles. And despite the global reach of Cannes Lions (which had its own challenges, like ad giant Publicis saying it will skip next year), VidCon remains eye-opening for newcomers, and vital for veterans.

“As annoying as it can be sometimes, when someone hasn’t experienced the space or talent, to see that sort of visceral response can be transformative,” said Studio71 President Dan Weinstein. “VidCon still kind of remains our version of the Super Bowl as it pertains to the MCN business.”

Studio71 continues to have a relatively small stable of creators (1,200 channels) doing a relatively mammoth business (7 billion monthly views), alongside its financing, production and distribution of original content, in Europe (where its German majority owner and two major partners are based), and the United States.

But like executives from other companies I talked with, Studio71 is rapidly evolving, pushing for “platform ubiquity” to take advantage of the explosion in content demand.

“Our execution of it hasn’t changed but the opportunity has in the content space,” Weinstein said. “We used to do a few small bets. Now, with proliferation across all the new OTT platforms, YouTube Red, and all these people needing content, there’s a huge content boom. We’ve been pretty effective packaging our premium assets and developing, producing, financing and making deals with various outlets. Wherever they can be programmed, we want to be.”

Even established traditional brands are getting into digital in a deep way. Rob Hayes, NBC’s top digital executive, told me that his colleagues no longer question the importance of digital media components, even for their traditional on-air programming.

That includes shows on emerging platforms such as Snapchat, where they did early deals, and Musical.ly, with whom they’re doing a still-unannounced music competition show. But those digital extensions also include a Saturday Night Live mobile app that connects fans to relevant decades-old content, and a three-hour live-streamed online companion to last winter’s live Hairspray broadcast.

“All these other things are important to keep a show top of mind,” Hayes said. “Look at Jimmy Fallon with those snackable short-form videos or SNL, a 43-year-old brand this fall that’s never been more part of the zeitgeist. Platform ubiquity, that’s where the customers are.  It’s a huge opportunity for any media brand to grow and evolve their business.’

In all, NBC digital teams create 4,000 pieces of content a month, much of it generated from specialists embedded in each production, Hayes said.  The latest initiative: Fallon monologues repurposed for playback on Amazon’s and Google’s digital home assistants.

“We don’t know how we’ll monetize it yet, but we will be there,” Hayes said. “What’s happened the past five years it seems like there’s an explosion of activity that wasn’t there before. Every couple of months, something comes up and we have to be there.”

I heard the same from others, such as Will Lee, Group Digital Director for entertainment, sports and style for Time Inc.

“One thing that’s important is brand ubiquity,” said Lee, a former colleague of mine. “With the rise of Facebook and YouTube as platforms, you really have to stand out. It’s about quality of product, but it’s also about being on platforms as aggressively as possible. It may not monetize at a rate that’s fair, necessarily, for some folks. But you have to make those bets. The way the audience is consuming video changes virtually every month.”

The list, developed with Dallas-based analytics company MVPindex, features some of the usual big stars with big followings, spin-off media ventures, and notable stands on issues. But it also includes a number of up-and-comers on rising platforms such as Musical.ly. MVPindex’s ratings “really showed us the velocity of how some of these stars are having an impact on readers,” Lee said. “We actually know they’re going to stay and continue into the future.”

Musical.ly, like Snapchat, is beloved by Generation Z, the under-20s who made up most of Vidcon’s attendees. Within a few years, they will comprise 40% of the nation’s consumers, Lee said. And the Musical.ly stars, using live-streamed video with fans able to directly “tip” performers, are very different from YouTube’s established creators.

Of course, being ubiquitous has its risks. Not every platform is hale and hearty. Seeso, NBC’s subscription comedy site, basically shut down right before the show. Comcast’s Watchable service seems in limbo, and Verizon’s Go90 service just underwent an expensive overhaul, handled by the technical team behind the equally expensive failure Vessel.

But many other services seem to be thriving, and lots of new money is coming from several directions.

VidCon’s sheer magnitude and energy was a useful barometer of all that momentum, even if, like the sprawling, disparate business it represents, it lacks a clarifying center or focus.

Certainly, apex beast YouTube, whose parent company controls about three-fourths of Internet ad spending, had lots to crow about. During the conference, CEO Susan Wojcicki tucked an entertainingly odd variant of her annual State of the Company presentation inside a fake episode of Rhett & Link’s Good Mythical Morning show.

A conversation with YouTube: @rhettandlink host the #VidConUS Keynote with @susanwojcicki

Amid the talk-show patter and test-tube tastings of vile substances, Wojcicki said YouTube has now passed 1.5 billion logged-in viewers each month, with its mobile viewers watching more than an hour of video a day. Wojcicki even disclosed viewership data for YouTube Red, saying the 37 shows on the company’s subscription service have generated about 250 million views since late 2015.

Like so much else in the business, Red is evolving, less than two years after its launch.

It began with shows mostly created by its homegrown stars such as Rhett & Link, who were mostly doing more of what they already do for free. That has proved to be a somewhat complicated value proposition for would-be subscribers who have many other free options they could watch instead.

The newest Red shows, by contrast, include celebrity-driven programs featuring traditional-media stars such as Katy Perry, Kevin Hart, and Ellen Degeneres. Importantly, some of those shows will be ad-supported and available to all viewers, not just Red subscribers.

Later, during presentations in YouTube’s sprawling separate industry-only lounge in the convention center,  YouTube executive Philipp Schindler declared that more adult viewers watch YouTube at any moment of every day than watch any of the top 20 shows on traditional television.

“Why is everyone here,” Schindler asked. “Because this is the future.”

Less clear is whether YouTube will be a big part of every aspect of digital video’s future, or just really, really big in the thing that first made it really, really big. For instance, YouTube has been doing live-streaming for a long time, as Wojcicki again pointed out. But live streaming isn’t a natural fit for most YouTube stars nor a natural destination for live-streaming fans.

And YouTube Red may be getting substantial views, but the latest show announcements represent a significant tack away from its original business plan. That suggests both a useful flexibility by the company and a forced need for it.

“When you’re building a business, you want to be early but not too early,” said Allison Stern, CMO and co-founder of video trend tracker Tubular Labs.

Whether it’s too early right now is the crucial question facing businesses in live streaming and in another nascent sector, virtual reality, Stern said. “I do think live video is a thing,” Stern said. Live streaming is creating a new set of stars whose shows read as more “authentic,” especially for younger audiences, compared to the highly produced and pre-recorded work so common on YouTube.

Stern likened the current moment for live streaming to 2011, when YouTube kickstarted the ecosystem of support businesses that led us to here. In that previous gold rush, companies such as AwesomenessTV and Vice cashed in big.

“This is the same,” Stern said. “It’ll be interesting to see who takes live video forward.”

Gaming, fashion & beauty, and children’s genres are all thriving on YouTube. By contrast, the live material on Facebook tends to be led by news, food/cooking, and even traditional media outlets. One recent study, by MarketsAndMarkets, projected live-streaming will be a $70 billion industry by 2021. That seems aggressive. But if it can attract the kind of attention that’s already made the “traditional” side of VidCon so huge, well, we’ll really have something.