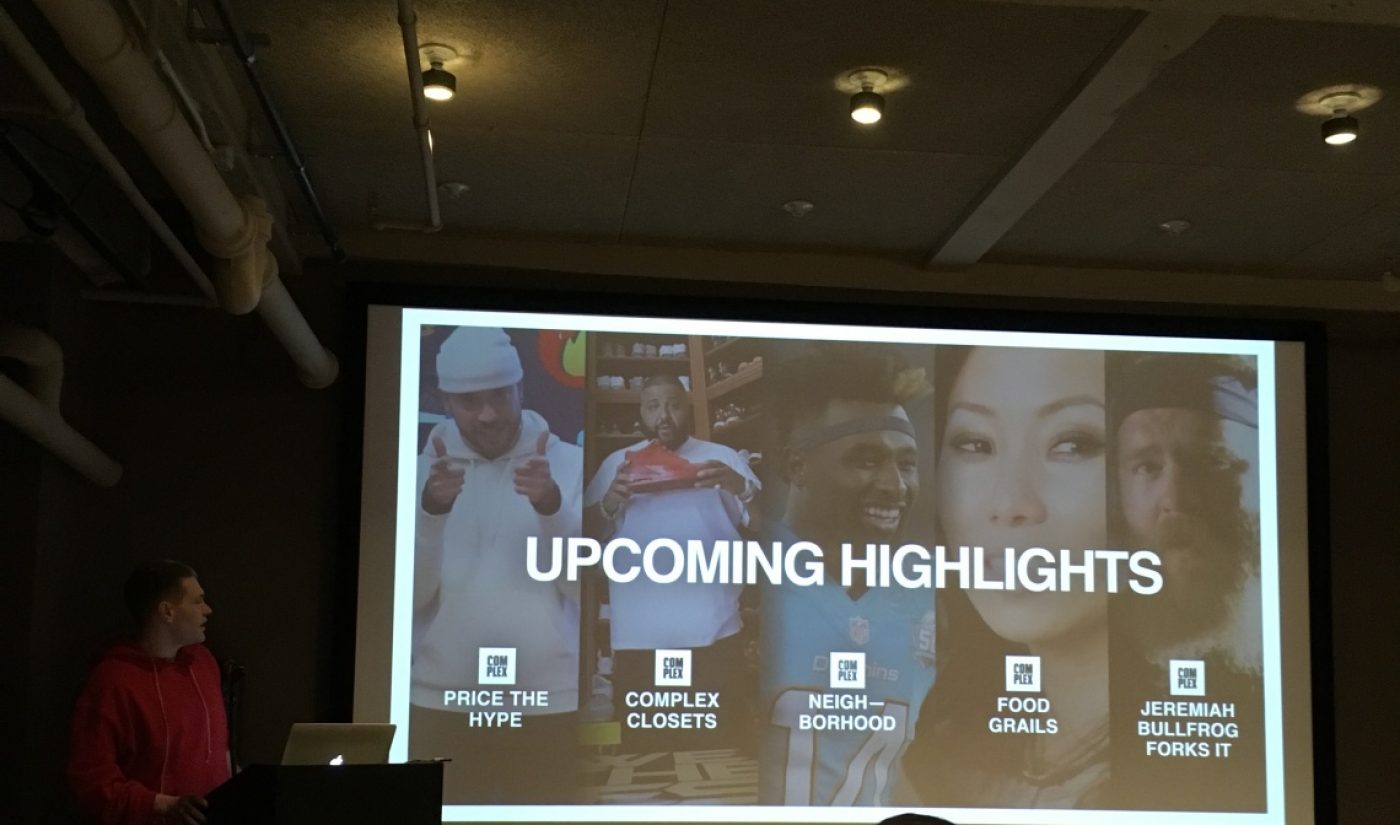 A year and a day ago, Verizon and Hearst jointly acquired Complex, a publication known for having its finger on the pulse of millennial-oriented pop culture. Since then, the video-focused Complex Networks brand has rapidly increased the amount of content it has released. As 2017 moves along, Complex expects that production binge to continue. At a media event in New York City, Complex Networks CEO Rich Antoniello said his company plans to have 40 active shows across all its verticals by the end of the year.

The shows that will make up the Complex library will be a combination of returning hits and new programs. The former category includes Hot Ones and Sneaker Shopping, which have become breakout shows for Complex Networks and have both surpassed 100 million views on YouTube. The latter category is made up of an eclectic combination that rangers from a travel/food series starring Rick Ross’ former personal chef (Jeremiah Bullfrog Forks It on Complex) to a game show about sneaker values (Price The Hype on Sole Collector) to two more seasons of a football docu-series that will live on the Complex Networks vertical for “Heartland millennials” (QB1: Beyond the Lights on Rated Red).

Many of Complex Networks’ upcoming shows will be shared through Verizon’s Go90 platform, but the media company touted itself as a powerful player across all social media platforms, including YouTube, Facebook, and Snapchat. “Our content speaks directly to passionate and engaged millennials who know the difference between what is authentic content and what pretends to be authentic,” said Antoniello in a press release. “We have enormous reach with our vertical channels and distribution partners and as a result, we can connect with users on a broad range of topics and issues that matter to them – from lifestyle to news to entertainment, Complex fuels the conversations that are an inherent part of pop culture vernacular.”

Here, via the release, are details about all the shows Complex discussed at its media event:

On COMPLEX, the leading voice for music, design and pop culture for a young, diverse, mass millennial audience:

JEREMIAH BULLFROG FORKS IT! (UNSCRIPTED) – COMING TO COMPLEX ON GO90 IN MAY

In each episode, Chef Jeremiah Bullfrog grubs, chefs, and swaggers his way through an iconic American city, soaking up the food culture, and putting his unique street gourmet spin on local dishes for an epic feast. One week he’s in New Orleans cooking up a creole spread for bounce superstar Big Freedia, and next he’s making soul food for rap artists in Atlanta. Along the way, Chef Jeremiah takes us to the hidden dining spots that only the natives know about, hand picks ingredients from insider sources, and lets us into his kitchen where he reveals his culinary secrets.

A native of Miami and former chef to Rick Ross, Chef Jeremiah is one of Florida’s most innovative purveyors of haute cuisine. But he didn’t get there by following the rules, he’s been kicked out of more five-star kitchens than he can count, and he started a fine dining food truck way before they were trendy. This chef marches to his own drum.

Whether he’s serving up a Mexican/Chinese mash-up menu for hip hop dancers in Oakland, or a five-course dinner to improv comics in Chicago, Jeremiah Bullfrog brings the party; devouring delicious food and drink with reckless abandon, making locals blush with his irreverent sense of humor, and doing everything he can to make sure this is not your momma’s cooking show.

Complex Closets takes audiences inside the closets and sneaker collections of the biggest celebrities and personalities in pop culture. Hosted by Complex’s Joe La Puma, the show explores not only his guest’s most prized possessions but also their sense of fashion.

THE NEIGHBORHOOD – COMING TO COMPLEX SUMMER 2017

Complex is rebooting its popular series The Neighborhood this summer, taking the biggest personalities in pop culture from music, sports, fashion, and entertainment back to the cities and neighborhoods where they got their start. Hosted by Complex’s Jinx, The Neighborhood heads to the celebrities’ hometowns for an honest and real representation of both their neighborhoods and lives before stepping into the spotlight.

On RATED RED, the multiplatform digital video network aimed at the heartland millennial audience that is fast becoming the leading voice for young audiences between the coasts:

Play By Play is a coming of age comedy series narrated by a present-day sportscaster who looks back on his life in the 90s and gives the play-by-play of his adolescence.

In 1994 Pete Hickey is a lowly freshman football kicker at St. Roman’s High—a Chicago Catholic League sports powerhouse. Unlike his father and brother before him, Pete’s a born benchwarmer; he just hasn’t realized it yet. But with the help of his best friend and fellow benchwarmer, Rocco, and his secret crush Alex, Pete learns to navigate the highs and lows of high school. First kisses, first dances, small victories, big losses—we’ll get the play-by-play call on all of them as we watch Pete Hickey find his voice.

Over the course of the last few years, Tyler Farr has taken the country music world by storm and has quickly become a household name, not only because of his multiple number one hits like “A Guy Walks Into a Bar” and “Redneck Crazy,” but also because of his likable, genuine demeanor and charm. Those close to him know Tyler for his dry, witty and fun-loving sense of humor. While he takes his music very seriously, Tyler also prides himself on being the life of every party. His celebrity friends (Jason Aldean, Blake Shelton, Brad Paisley), music managers and bandmates know that Tyler will never miss an opportunity to crack a joke, pull a prank or pursue a crazy idea if there is one to be had. Now, Tyler wants to pull back the curtain and give fans an all-access glimpse at his life on and off the road, and true to nature he is going to take things “A Little Too Farr” in every episode.

GOING CAMBO – (UNSCRIPTED) COMING TO RATED RED ON GO90 MAY 30

Cambo is a 20-something, self-taught survivalist who thrives on being one with the wild. While others his age were playing video games, Cambo retreated to the swampland and wilderness of Alabama and taught himself how to live off the land.

Now, he’s teamed up with friend and American hip hop artist/producer Yelawolf to give “anyone willing” an opportunity to embark on a 48-hour adventure of a lifetime the way only he knows how. Cambo and his guest will be dropped in a remote location in the backwoods of Alabama with only the clothes on their back and Cambo’s well used Slumerican buck knife. Together they will become one with the wild as they hunt for their food, traverse uncertain terrain, and set up camp for their two-night adventure that will give real meaning to “Going Cambo!”

THROTTLE ROCKETS (UNSCRIPTED) – COMING TO RATED RED ON GO90 MAY 2017

Greg Hatcher and his team of mechanics make dreams come true for scooter enthusiasts. That is if your dream is to turn the humble scooter into an all-terrain hunting rig, a sand-assault vehicle for the beach, or a fire breathing “Call of Duty” themed vehicle.

Hatcher, owner of Man in the Box, a custom build shop in the Smoky Mountains, goes to the extreme to make his customer’s dreams a reality and turn scooters (and the occasional golf and shopping cart) into full-fledged “throttle rockets.”

Each episode of Throttle Rockets presents a new opportunity for Hatcher and the guys to turn a customer’s idea into reality.

Debuting on April 26, The Infidels follows a group of young war veterans coping with the banality and quietness of civilian life by riding stunt bikes illegally through the streets of Arizona. The Infidels is the third documentary in the Rated Red Documentaries series spotlighting stories and issues important to young audiences between the coasts that don’t always make national headlines. Previous documentaries include Black Rock Bluesfollowing a young millennial coal mining family in Ohio; and Guns Up Texas, a four-part road trip through the Lone Star state to talk, and shoot, with all types of people and explore the nuanced relationship Texans have with firearms.

UNSIGNED – ON RATED RED.COM STARTING MAY 1

Unsigned is a new music series based in Nashville that spotlights some of the hottest music artists flying under the radar…for now! Filmed at the new Rated Red studio in the heart of Music City, the show includes in-depth interviews and live performances giving viewers a chance to discover artists from the worlds of rock, pop, country, and rap. This season Unsigned takes you behind-the-scenes with Ashla Taylor, Heathen Sons, AWAS and more.

On FIRST WE FEAST, the James Beard Award-winning digital video network that believes food is the new pop culture:

FOOD GRAILS – COMING TO FIRST WE FEAST THIS MAY

FOOD GRAILS is a food and travel show that showcases the new underground icons of American food and explores what emerging food cultures can tell us about the cities they represent. Focused on hyper-regional specialties FOOD GRAILS explores the converging strains of pop culture, race, and class that define a food’s DNA, telling a larger story about how these forces shape a city’s culinary identity. New episodes launch every two weeks.

The world’s first sneaker game show that asks contestants to make their best guesses on the resale values of streetwear’s most hyped items in order to win shoes or lose. Hosted by Complex’s Rich “MaZe” Lopez and Yaya in this fast paced show where contestants can win big or be sent home with their credibility in shreds.

Sneaker resale culture is a billion dollar business with sneakerheads and die-hard collectors thinking nothing of dropping thousands of dollars on rare and limited editions of Nike or Adidas shoes. Price the Hype taps this passion and lets contestants show off their aftermarket skills.