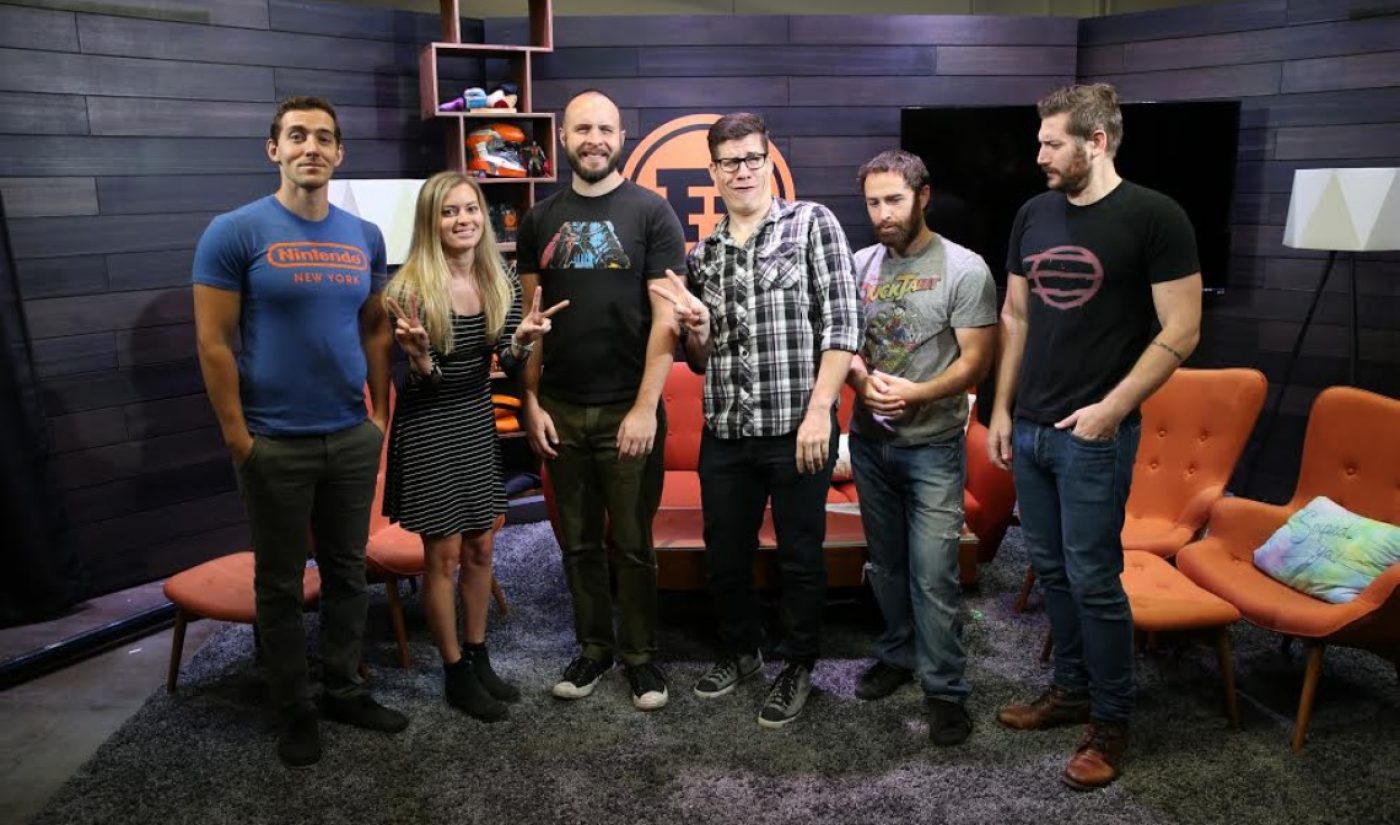 In 2015, Austin-based Rooster Teeth expanded into Los Angeles with the launch of Funhaus, a channel that brought over most of its hosts from Machinima‘s old Inside Gaming crew. Two years later, Funhaus has flourished, picking up a dedicated following thanks to a combination of gameplay, humor, nonsense, and even scripted content, such as the new animated series Sex Swing. The members of the Funhaus gang — (from left to right above) James Willems, Elyse Willems, Bruce Greene, Lawrence Sonntag, Matt Peake, and Adam Kovic — now count more than a million subscribers on their channel, and we caught up with Greene and Kovic to hear some of their thoughts.

Bruce Greene: It constantly blows our mind. It’s one of those things where it feels like just a number until we get to meet our fans at RTX, PAX, Let’s Play Live, and everywhere else. At that point, we want to say to our fans, “Thanks for watching and laughing with us. You keep us going.”

TF: With so much gaming content on YouTube, what would you say makes Funhaus stand out from the pack?

BG: Funhaus stands out from the pack because we are a comedy channel first, gaming channel second. Think Mystery Science Theater 3000 for video games. Apart from that, about half of our videos are just us dicking around with each other, whether it’s on a podcast, or Open Haus, or trying to get demo disks to work on a PC. We want to make people laugh, regardless of if there’s a video game involved.

TF: How much editing goes into any particular gameplay video, and what moments are you looking to highlight in that process?

BG: I always say the magic of Funhaus videos is in the editing. We typically shoot for an hour or two, then it takes about 2 workdays to turn around an edit. That’s EIGHT times the work put into post-production. We are always trying to highlight funny stuff that we say or do with even funnier photoshops or graphics. Sometimes, just a zoom-in or a replay will do the trick, too.

TF: You guys have played a lot of terrible games on your channel. Which one was the worst?

BG: This is a question we get a lot. We have played some pretty terrible games (some of which never even got uploaded to our channel), but the magic of a terrible game that works just enough is what we are looking for. That said, the worst game we love to play has to be Heavy Metal F.A.K.K. 2. It has an incredibly rich backstory, fully fleshed out characters, and amazing environments, but it’s all madness. Watching a woman in the smallest bikini ever climb a pole while swinging a sword while dodging a crappy tree-dog creature shooting a laser gun is just so much fun.

TF: Since your channel uses a “group play” dynamic, what steps do you take to ensure one voice doesn’t drown out the others?

Adam Kovic: I don’t think there’s ever a sure-fire way of making sure people don’t get talked over but we do try to avoid it. We all kind of naturally take on roles during a video and often we come up with the same jokes. Sometimes we will blurt them out at the same time, other times one person will get in first, giving the second or third person time to back off. I wouldn’t consider any person to be the alpha or anything like that, I think we’re just good at figuring out roles and sticking to them for an hour at a time.

TF: You’re known for being a relatively unfiltered channel in terms of your commentary. Given what has happened recently with creators like PewDiePie, do you ever worry that a line in a Funhaus video could get you in trouble?

AK: We definitely benefit from having a group dynamic; it’s like an ever-present “get out of jail free card”. For example, one of us can say something that someone might find incredibly offensive out of context but thankfully there’s always someone there who will diffuse the situation within seconds. It’s kind of our way of saying “jk” without having to actually tell people it’s a joke; we say a lot of stupid things but it’s supposed to make US look stupid, not someone else. It’s definitely important for people to have beliefs and morals but I don’t think any of us have an interest in pushing a personal goal or agenda onto our audience.

As for the PewDiePie comparison, well, we’re not anywhere close to being in his league. Guys like Felix unfortunately have to deal with an ever-present spotlight on almost every part of their lives, off and online. Thankfully, we’re still somewhat under the radar, and we skew older so the angry phone calls from concerned parents have yet to hit us.

TF: What has been the biggest advantage you’ve gained by joining the Rooster Teeth team?

AK: Even with the main Rooster Teeth HQ being in Austin, over 1300 miles away from us, we get more help and support than we ever did at the last job. Which isn’t a dig at the big M; we’re just at a place now that feels better aligned with our emphasis on community, production, and business practices.

TF: What sort of response have you seen to ‘Sex Swing’ in particular?

AK: Sex Swing has been a flurry of emotions for everyone here who has worked on it. We poured a lot of hours into an animated show that we wanted to make, a first for everyone at FH. The animation team in Austin did such a tremendous job bringing our silly scripts to life so to see the mixed reaction has been painful, joyous, and humbling. We knew going in that this was going to be a learning experience and – fingers crossed – this isn’t the last animation project we get to make with Rooster Teeth.

TF: What’s next for Funhaus? Any fun plans?

AK: We would really love to keep making content that makes people laugh while growing the team that we have. We’re painfully aware that while we have a dedicated fan base, we really need to grow our cast of talent. Rooster Teeth has been growing at an incredibly rapid pace especially in the live action department. As we get more and more opportunities to participate in said projects we need to make sure the house (pun) we build keeps on making great content for millions of people to enjoy.