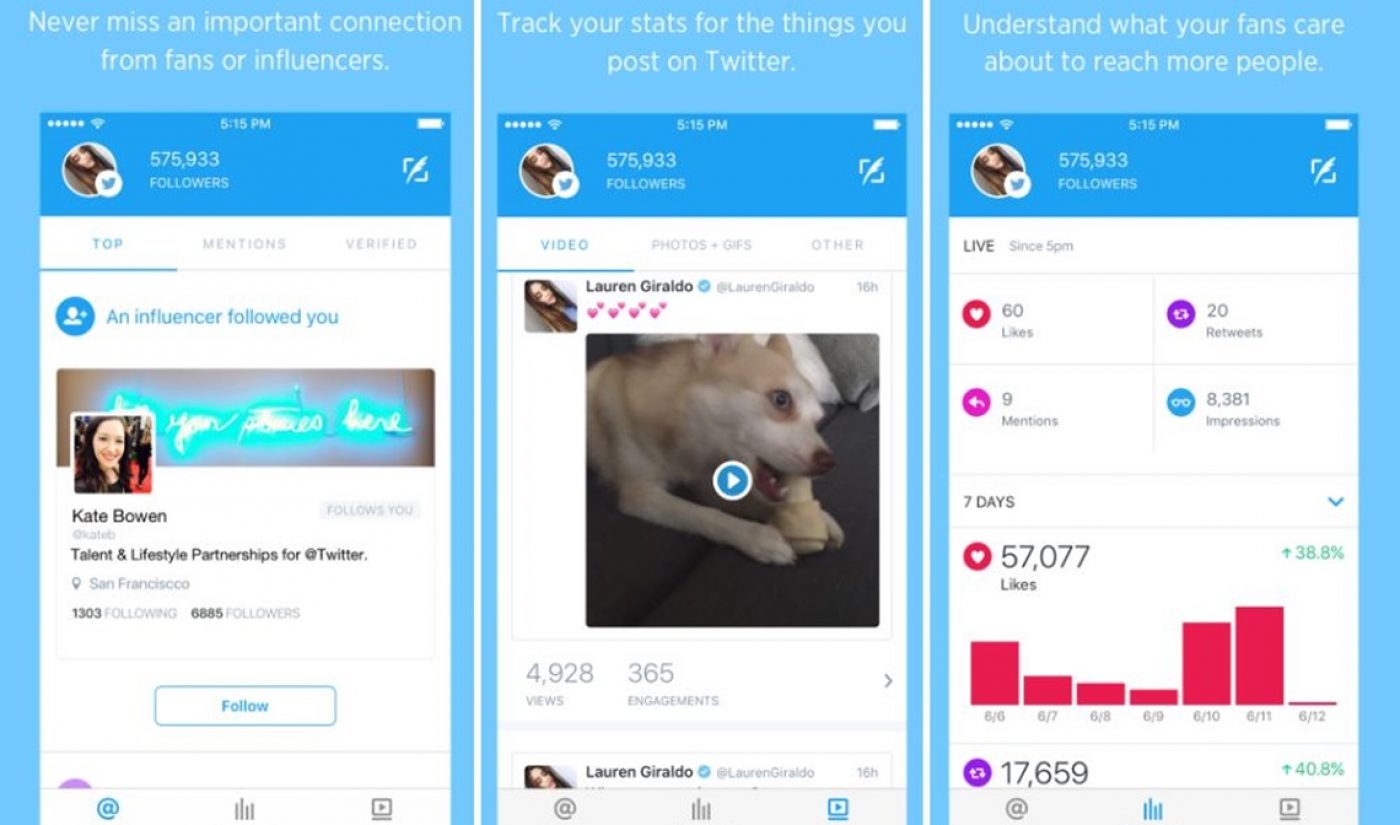 Twitter has released a brand new standalone app for influencers today that is intended to help users grow their audiences and better interact with fans. Called Twitter Engage, the app offers down-to-the-second analytics about how Tweets are performing, and also surfaces @mentions and follows from fellow influencers and loyal fans for easier viewing.

At the same time, Twitter — which said that video tweets have increased by 50% over the past six months — is announcing major product updates for both Twitter and micro video platform Vine, which it says are bound to make both platforms more profitable for video creators and more engaging for fans. Vine — which is distinguished by its uber-brief six-second time limit — will now allow “a small group” of creators to “add a video to their Vine, turning the six second Vine into a trailer for a bigger story,” Twitter said. “This opens up monetization opportunities for creators. And soon, any creator in the Amplify Open program will be able to monetize Vines, just like native Twitter videos.”

And on Twitter, all users can now share longer videos. Previously, consumer uploads were limited to 30 seconds, but beginning today, all users can post 140-second videos — a nod to the company’s famed character count. And a new video browsing experience is coming to Twitter, the company said, that will make it easier to discover native Twitter videos and Vines. Now, whenever users tap on a video Tweet or Vine on their home timelines, a new, full-screen interface launches with suggested videos below.

Prominent creators cheered the updates. “I’m all about apps that make connecting with my fans easier, and Twitter just did it with Twitter Engage,” said noted influencer Lauren Giraldo of the company’s forthcoming creator app. “With all of the info I need in one place, I can now spend more time focusing on what’s most important.”

Additionally, Twitter Engage enables influencers to filter performance data — including retweets, @mentions, and video views — over a certain time period, and can produce a real-time feed of what fans are tweeting about at any given moment. The app, which is available today in the app store, also enables influencers to track post-by-post performance for videos, GIFs, images, and other Twitter activity.

Twitter has made several strides to bolster its video capabilities in recent weeks. Yesterday, the company announced a $150 million acquisition of machine learning startup Magic Pony Technology, which CEO Jack Dorsey said “will be used to enhance our strength in live and video.” The company also reportedly added a new division within its product team that will specifically work with VIP users and influencers.