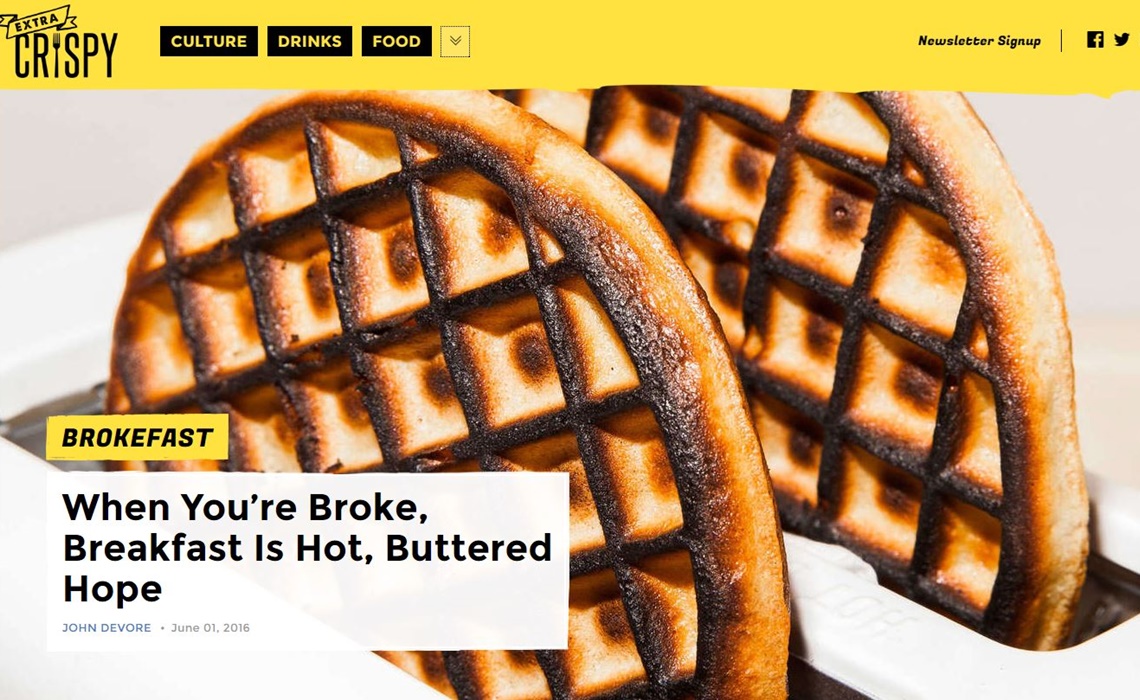 Time Inc. Cooks Up ‘Extra Crispy’, A Digital Brand About All Things Breakfast And Brunch

Time Inc. has announced today the launch of a new digital destination dedicated to the wonders of breakfast and brunch called Extra Crispy. The website — and its accompanying social channels — are the second launch by Time Inc.’s Brooklyn, N.Y.-based creative lab, The Foundry. Last year, The Foundry launched an automotive brand called The Drive, which it says has grown to reach more than 2 million monthly unique visitors.

Extra Crispy will feature recipes, how-tos, hacks, cultural trends, and breakfast-related news, according to Time Inc., as well as first-person features with influencers and celebrities. The site’s launch sponsor is Arla Foods, a Danish dairy company that is launching its cream cheeses and sliced cheeses stateside.

Meredith Turits, a founding editor of Bustle and The Foundry’s senior strategist of brand development, will oversee the launch, while Ryan Grim, a former managing editor for Vice, will serve as site director. “We’re thinking about breakfast as not only the most important meal of the day, but also as a new cultural stronghold,” Turits said in a statement.

However, one of the site’s most critical editorial roles has yet to be filled. Extra Crispy is kicking off a national search for a resident bacon critic, who will undertake a three-month investigation into the beloved breakfast meat and ultimately crown the best bacon in America.

In addition to its various content initiatives, live events will also be a major part of Extra Crispy’s strategy, Time Inc. said. The brand will sponsor CoffeeCon, a consumer coffee festival in Brooklyn on June 4, and will launch its own two-day breakfast celebration over Labor Day weekend.

“Extra Crispy allows us to experiment with inherently shareable content — from coffee obsessions to Cronuts and the viral food phenomenon of today,” Time’s SVP of editorial innovation, Matt Bean, said in a statement. “We’ll have our plates full.”