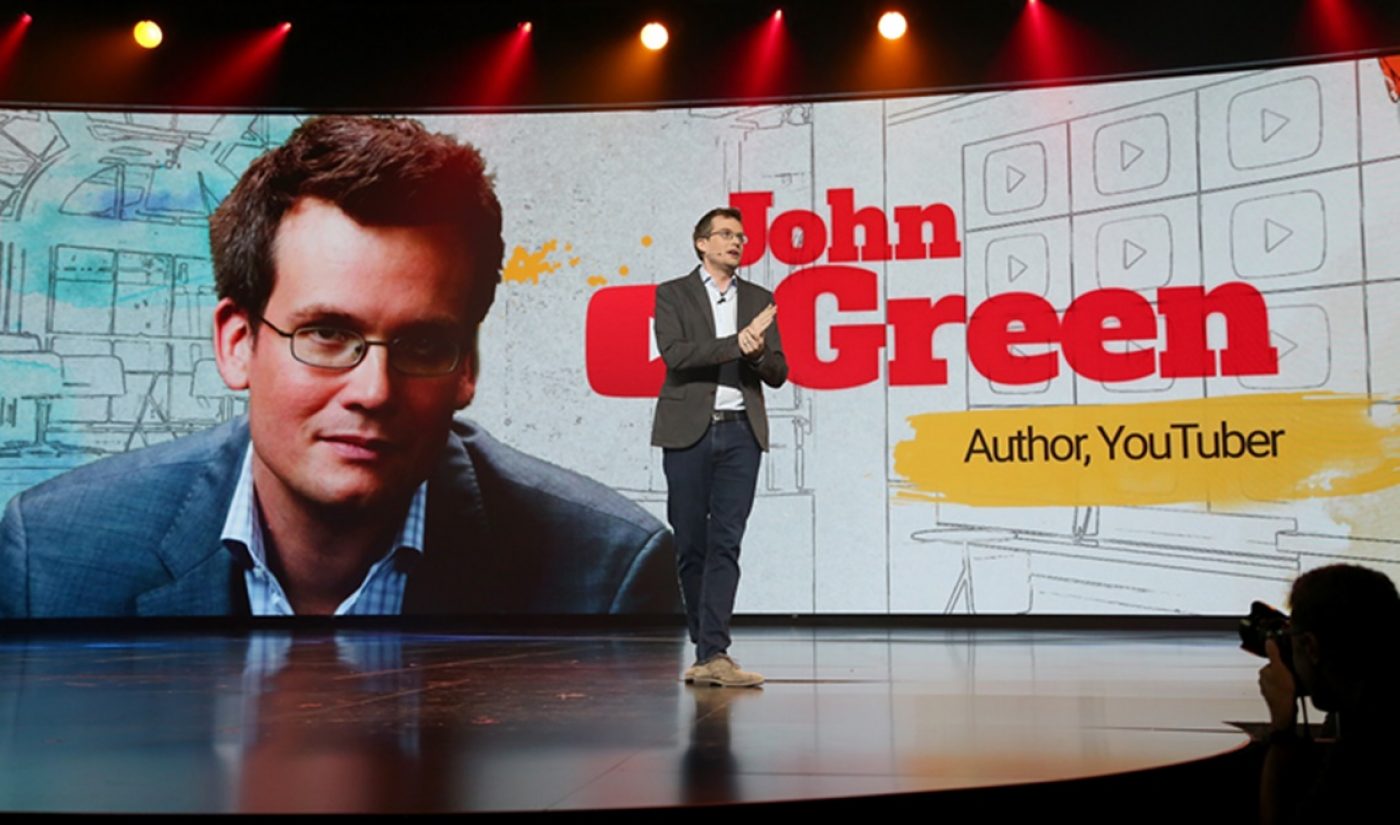 On April 30, 2015, John Green took the stage at Madison Square Garden and addressed a theater full of advertising executives. Green, best known as the author of beloved novels like The Fault In Our Stars, was one of the content creators YouTube had chosen to represent it at its yearly Brandcast, when it tells advertisers why its pre-roll ads, brand integrations, and sponsorships are worthwhile investments. The Vlogbrothers co-host is a prominent figure within the YouTube community, and he arrived with a strong message: He warned the assembled advertisers about the potential consequences they would face should they choose to ignore the widening appeal of the homegrown online video community.

“They’re doing live events and publishing books; they’re crowd-funding and producing albums and getting grants from nonprofit organizations,” Green said of his fellow creators. “In short, they’re building a world where they don’t have to depend on advertisers. And they’re thriving. You may not see that success, but it’s happening.”

According to Green, online video creators can reach beyond advertising because they offer much more than the kind of escapist entertainment audiences are used to seeing by way of film and television. “The most passionate creators on YouTube…we’re not in the distraction business,” he said. “We’re in the community business.”

In the seven months since Green’s Brandcast address, a flurry of activity within his community has backed up his bold claims about the power of online video creators. YouTube, Vine, Instagram, and Snapchat stars continue to secure their own book and movie deals, and those deals are delivering big returns. In 2015, films like The Outfield (starring Nash Grier) and The Chosen (starring Kian Lawley) roared up the iTunes charts, while literary works authored by YouTubers contributed to an unexpected upswing in the sales of physical books.

Yes, John Green is right. Thanks to their community-building skills, online video stars are massively influential, and traditional media is struggling to keep up. In 2016, that’s only going to become more evident.

At the same time, Green’s address ignored a crucial issue that threatens to stunt the growth of the online video community. For all their influence, YouTube and other social media stars are not being held to the same standards as more “traditional” content creators, and for many people within that former group, this lack of standards is holding them back.

When a YouTube star publishes a book, or releases a movie, or follows one of the many other paths successful creators can follow to advance their careers off of YouTube, PR machines spring into motion and seek out press coverage. In order to sell their clients, those PR companies will cite many different measures of influence. They’ll mention pre-order records, five-star reviews on iTunes, and chart-topping sales.

What they rarely bring up–if ever–are critical reviews from other publications. That’s because 1) there simply aren’t a lot of individuals and outlets watching these types of entertainment properties through a critical lens, and 2) an alarming portion of the critical reviews that do exist tend toward negativity.

Expelled, a Cameron Dallas vehicle that delivered big numbers on iTunes and encouraged the development of similar “influencer films,” was barely touched by critics and was received negatively by the New York Times. Snervous, a documentary centered around YouTube star Tyler Oakley, has been deemed little more than an easy-to-swallow puff piece by multiple outlets. When YouTube star Shane Dawson moved into film with a feature called Not Cool, he drew several responses that bordered on outright disgust.

These negative reviews are easy to ignore. After all, the films and books created by YouTube stars almost always post terrific sales figures, and even if a few stodgy reviewers don’t care for them, why should that matter to the producers of those films? They are doing good business while also providing a joyful and entertaining experience for fans, and those two truths justify the continued proliferation of off-YouTube, influencer-driven media. Besides, online video stars aren’t making movies for critics, at least not yet, and as long as they can reach extremely passionate fans, why should they? H.L. Mencken and an uncanny number of Hollywood examples give credence to the notion that critical approval is by no means critical for success.

For most outlets, including this one, coverage of a new influencer-driven project features little to no criticism, negative or otherwise. Instead, we focus on the release details, sales figures, and premiere events. There are a lot of factors that disincentivize online video criticism, but the most important one is that the industry is still young and still trying to prove itself as a legitimate entertainment medium. These films represent bold steps forward in the kind and quality of content online video creators are producing, and when they are generally well-received, it looks like a big win for the online video industry. For that reason, those of us who know the industry is still in its nascent stages, but see its incredible potential, are perhaps not holding its entertainment properties and players to the same standards we would for more “traditional” or “mainstream” projects.

What’s harder to ignore is what those reviews suggest–that many YouTube stars might not be ready to compete directly with acclaimed TV and movies.

The rise of influencer-driven media has naturally extended to TV, where several online notables–including Grace Helbig and The Fine Bros–have landed their own shows. Almost none of those shows, however, have been renewed for second seasons. Helbig’s failure to draw a significant audience on E! was a particular disappointment; on the same day as John Green’s Brandcast address, Business Insider posted a brutally honest article discussing the comedienne’s TV performance. Her low ratings do “not bode well for the future of the series, or the idea that YouTube stars can seamlessly transition from being laptop famous to flat-screen famous,” the article claimed.

Business Insider’s tone is perhaps too pessimistic, especially when all of the factors that go in the production of a TV show are taken into account. The networks that pick up shows created by YouTube stars are also responsible for selling them, and if a show fails, that is at least as much a marketing failure as a content one. As creators like Helbig and the Fines gain more experience in the world of traditional media, the product they offer will improve, and the networks they work with will learn how to promote them properly. Meanwhile, thanks in part to the rise of streaming video sites like Netflix and Amazon, TV ratings are being exposed as the flawed and outdated metric they are. And just because Grace Helbig couldn’t get ratings on E! doesn’t mean her show wasn’t worth watching.

The point in all of this is that the TV struggles of YouTube stars are, like negative reviews of influencer films, easy to dismiss. Taken together, though, these two issues speak to the same idea. The sort of viewers who are directed to shows they might like by positive criticism and big ratings are, in many cases, outsiders to the world of online video. They are perplexed–or scared, even–by a world where a boisterous Swede who shouts at his video game console can garner more fame and attention than anyone else. For those viewers, a creator’s previous career on YouTube isn’t a sell; it’s merely a fact.

This is where the need for standards comes in. Expelled, Snervous, and The Chosen are three distinctly different kids of movies, and yet they are generally sold the same way: By promoting the online video stars at their respective centers. That strategy pleases fans, but it doesn’t bring in outsiders. If however, those features were sold as both influencer films and potentially appealing to wider genre audiences, then their stars would be able to both please their fans and diversify their fan bases. Instead of ignoring bad reviews, producers could embrace positive ones, so long as they could create a film good enough to draw that kind of praise.

I believe there are many online video stars–hundreds of them, at least–who are talented enough to carry films, books, and TV shows that are both appealing to their fans and a wider audience. The creators who appeared on The Late Late Show With James Corden, for example, proved they are capable of sharing a stage with a well-groomed TV talk show host while still entertaining network TV audiences just as well as he does. For those creators to be properly praised, however, a portion of their work and the works of others must be deemed sub-par. Otherwise, in the eyes of the TV-watching outsiders, there are no talented YouTube stars or untalented YouTube stars. There are only YouTube stars, and for many potential viewers, that’s not a strong enough sell.

Creators (and, by association, the executives who work with them) can continue to ignore the issues I’ve laid out above. If they do, they will continue to land deals off-YouTube, will continue to sell well, and will continue to be seen as highly-influential brand spokespeople. At the same time, they will risk being swallowed up by an evolving YouTube that may not value their community-building skills the way it used to. To put it more bluntly: YouTube might want to be Netflix, and that could force creators to adapt.

I recently shared a video by Matthew Patrick, a pop culture philosopher and YouTube expert known for his Game Theorists channel. Patrick noted that several YouTube updates from the past year–including an increased focus on watch-time, increased segregation of individual content categories, and the launch of YouTube Red–all point to a future where TV-style content is favored by YouTube over other videos. To Patrick, YouTube’s desire to compete with Netflix, Hulu, and Amazon Video is scary, because it could push the online video community away from its own home.

I took a more optimistic view on the matter, because YouTube has shown a commitment to including its homegrown creators within its premium content plans. While it may want to license Hollywood TV shows and movies, it also wants to show what its own community has to offer, and that will lead to more opportunities for the people who are starring in their own films, writing their own books, and launching their own TV shows.

If, however, the premium, influencer-driven shows that end up on YouTube Red do not draw a Netflix-level response, what will be YouTube do next? If it wants to compete with Netflix, and prestige programming offers a quicker route to that destination than shows created by YouTube stars, will Patrick’s fears be realized?

I think YouTube can build a Netflix-like product supported by its own creative community, because I think that community is filled with smart and talented people who craft videos in ways that many traditional media executives can’t even comprehend. In order to properly highlight those skills, I hope to see YouTube stars held to high standards in 2016. I want online video creators to be challenged, but I also want to see them overcome those challenges, because I know they are capable of that.

I’ll admit this to be a bit of a self-serving request. After all, if online video creators are held to high standards, that makes my job more fun and engaging. But this is more than just a selfish impulse. It’s an important litmus test for a community that is now a decade old and hungry to keep growing. And so, as I spend the next year reviewing all the influencer-driven media that will surely come to my attention, I will try my best to hold online video creators to the high standard they deserve–and I hope my fellow media members will follow suit.