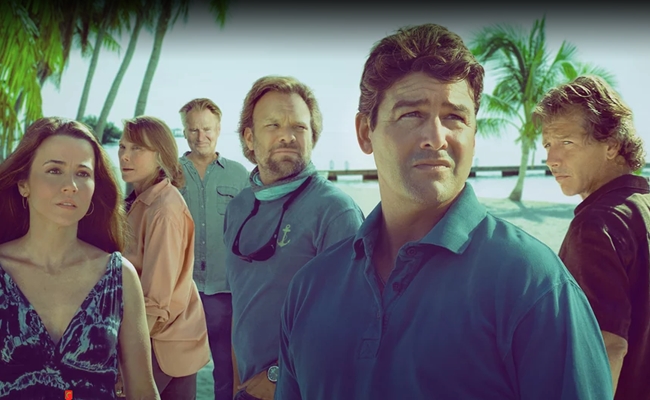 After adding another hit sitcom to its lineup thanks to the launch and immediate success of Unbreakable Kimmy Schmidt, Netflix has bolstered its dramatic offerings as well. The streaming video on-demand service has debuted the first season of Bloodline, which debuted in its entirety on March 20th.

Bloodline, set in Key West, Florida, stars Kyle Chandler as John Rayburn, who is one of four siblings. When his older brother Danny (Ben Mendelsohn) returns home, it sparks family drama that defines the series. The first season spans 13 episodes, all of which released simultaneously on Netflix.

On the surface, Bloodline is another enticing drama from the platform that has already attracted audiences with House of Cards and Orange is the New Black. More than that, though, this is Netflix’s clearest “Emmy-bait” series yet. Chandler, the star, is best known for his role on Friday Night Lights, for which he won an Emmy. Creators Todd A. Kessler, Daniel Zelman, and Glenn Kessler (who also serve as the show’s writers) previously teamed up for legal drama Damages, which earned them Emmy nominations of their own. Should Bloodline generate the same buzz as its cast and crew’s former credits, it can be another important step in Netflix’s ongoing quest toward mainstream recognition.

Will Bloodline reach that goal? Early reviews are fairly positive. AV Club delivered the most glowing praise of all, calling Bloodline a series that “demands to be binge-watched.” If you’ve got some free time this weekend, you can put that claim to the test yourself by checking out the series over at its Netflix homepage.