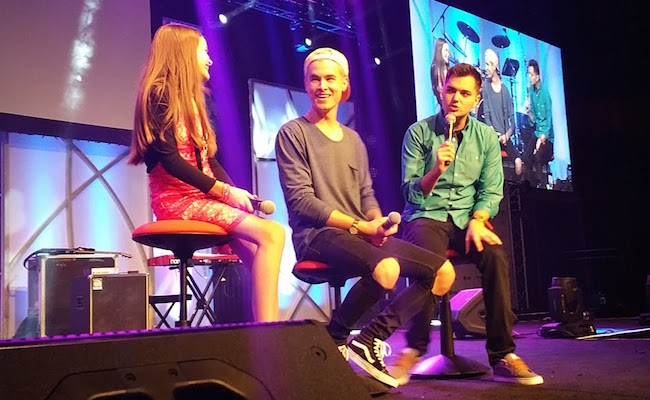 Kian Lawley is about to become YouTube’s latest movie star.

The 19-year-old former member of the late YouTube supergroup Our2ndLife and current half of the new YouTube channel with fellow O2L-mate Jc Caylen dubbed KianAndJC just dropped the trailer for his feature length thriller The Chosen at Playlist Live in front of an audience of screaming virtual and live fans numbering in the thousands.

When a child-stealing demon attaches itself to a little girl, her family is thrust into a battle against time in order to save the girl and send the demon back to hell.

The Chosen is produced by Terror Films and SUPERGRAVITY Pictures (Max Benator and Marc Hustvedt’s new feature-film studio set to fund long-form projects with social media stars) and will be released worldwide in Summer 2015 in select theaters and online by way of the VHX-powered TheChosenMovie.co website, iTunes, and other pay-to-view-and-own online video platforms. In addition to Kian and Sohn, the film features Elizabeth Keener (of Showtime’s The L Word) Dayna Devon (of Extra and TLC’s Plastic Wives) and a short list of other established and burgeoning on screen talent.

Interested parties who want to stay up to speed with Lawley and his feature film debut are encouraged to register for “exclusive access inside the making of the movie,” including “clips and updates from the cast, advanced access to special Insider’s theater tickets, discounts on official merchandise and more” at the movie’s website.

Lalwey is managed by Big Frame‘s Andrew Graham, whose clients seem to be embarking on a lot of creative off-YouTube endeavors.