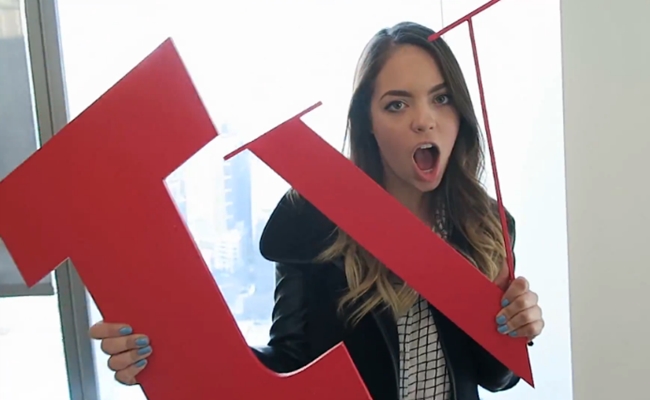 Conde Nast is looking to make deals with YouTube stars, and as part of that initiative, it has placed a bubbly, precocious teenager at the center of one of its main channels. The media company has teamed with beauty vlogger Claudia Sulewski, who is now the official host of Teen Vogue‘s channel.

In her new role, Suleski–who makes videos on YouTube under the username BeyondBeautyStar, will appear regularly on the Teen Vogue channel, which features the same sort of beauty, style, and fashion content found in the magazine of the same name. Sulewski has already released her first vlog on the channel, and it takes her to the Teen Vogue headquarters in New York:

Suleski is the second YouTuber who has partnered with Conde Nast as part of the company’s new initiative. Previously, it struck a deal with fellow fashionista Kandee Johnson. Both Johnson and Sulewski appear in videos within the Conde Nast network before teaming up with the company; in Sulewski’s case, she covered Teen Vogue’s Young Hollywood Party back in September 2014.

“Being a long time reader of Teen Vogue, I’m so honored to be their first ever YouTube Host,” exclaimed Sulewski in a release. “2015 will be filled with so many exciting opportunities and collaborations. It’s such a dream becoming a part of the Conde Nast family.”

Beyond her new gig with Conde Nast, Sulewski also recently passed one million subscribers on her main YouTube channel. Put those two things together, and you get a pretty great week for the fashionable 18-year-old.