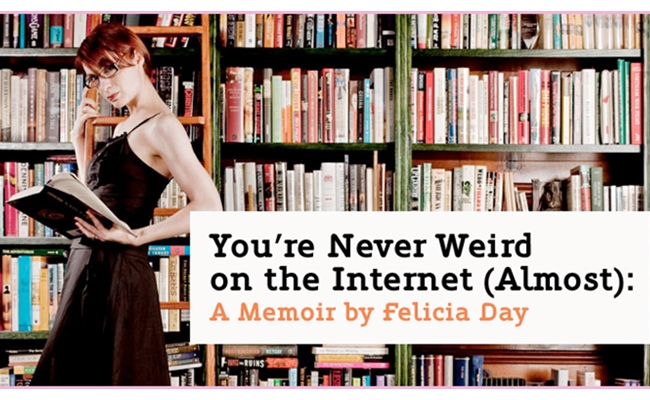 Felicia Day’s First Book Due Out August 2015, Available For Preorder

Add Felicia Day to the list of online video personalities with their own books. The actress, vlogger, and writer, who runs the Geek & Sundry network, has announced You’re Never Weird On The Internet (Almost), a memoir about her rise to online fame.

Day’s story is a shining example of the Internet’s star-building power. She moved to Hollywood to pursue her dream of becoming an actress, only to find herself “typecast as a crazy cat-lady secretary.” Instead of accepting this role, she went online, where she launched a web series called The Guild. That series, which chronicled the adventures of a clan of MMORPG players, found a large audience and ran for six seasons.

During The Guild‘s run, Day also appeared in another online hit, Dr. Horrible’s Sing-Along Blog, which further bolstered her career. Now, Day controls an entire network of content through Geek & Sundry, which has more than one million subscribers on its YouTube channel and was recently acquired by Legendary Entertainment.

Day will tell her life story in her book, which she has spent the past year writing and will publish through Touchstone. “I just wanted to share stories about how I got here,” she stated in a introductory video for the book, “from my high highs to my low, very anxious lows, and basically show everyone that if you embrace your weirdness, that can be your biggest strength.”

When the book arrives next August, Day will ring it in with a tour and signings and all of the other promotional stuff associated with a book release. Until then, fans can pre-order a copy from Amazon.