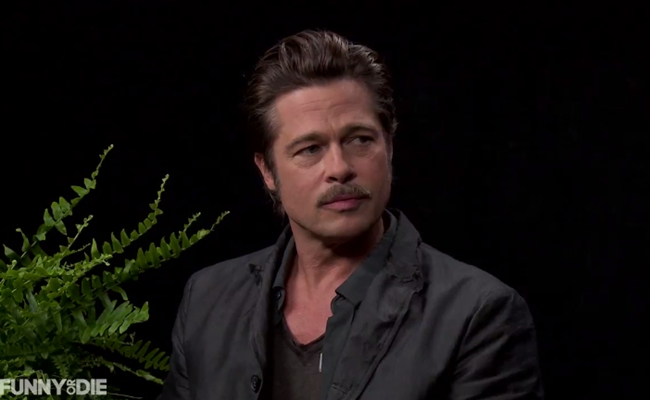 Brad Pitt recently embarked on a media tour to promote the film Fury, and for one of his stops, he sat down with Zach Galifianakis on his left and a potted plant on his right. Pitt is the latest celebrity to stop by Between Two Ferns, where he endures Galifianakis’ typical barrage of awkward insults.

As the episode begins, Galifianakis laments the fact that he has to “go back to interviewing dumb actors” after previously getting a chance to sit down with the President. He then introduces “Bradley Pitts” to the viewer before asking him about his movie, which he thinks is called “furry“. When Pitt begins talking about his work with charity organization Make It Right, Galifianakis decides to “liven this up” by calling in Louis C.K. for some stand-up. Naturally, the Louie star also ends up on the receiving end of a few barbs.

Here’s the episode, which is available over at Funny or Die:

The episode is the first new Between Two Ferns installment since Galifianakis’ interview with Barack Obama. If that episode’s success is any indicator, Fury is about to get some more exposure.