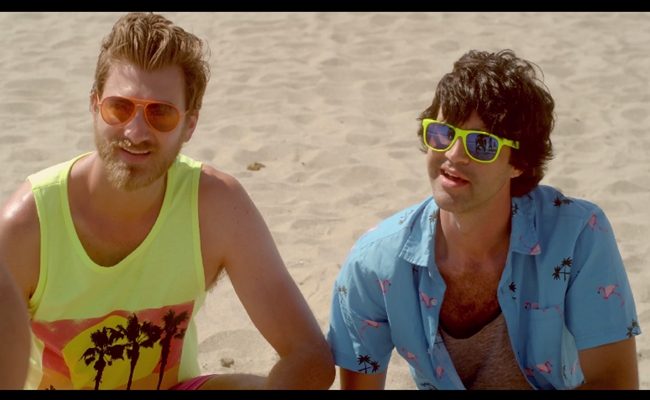 Despite serving as two of the YouTube community’s most familiar faces, Rhett & Link only release a new video on their main channel about once a month. This causes any new offering from the comedy duo to merit celebration, but their latest video is particularly brilliant. Rhett and Link teamed up with Choice Hotels for “I’m On Vacation“, a music video about hitting the beach, working at an ice cream sandwich factory, and the zombie apocalypse.

In “I’m On Vacation”, Rhett and Link do their best Lonely Island impersonation. Just like in “Spring Break Anthem” or “I’m On A Boat“, they wear billowy shirts, don silly sunglasses, and sing a bombastic tune about fun in the sun. The video’s sudden, surreal turns also have a Lonely Island-esque feel to them, as do its numerous guest appearances. Shanna Malcolm, for instance, shows up as the duo’s overbearing boss.

Collective Digital Studio brokered the deal with Choice Hotels that would give life to Rhett & Link’s “I’m On Vacation” and the video is now central to the hotel chain’s #VacayGoneCrayCray campaign. At the end of the video, Rhett and Link inviting viewers to share their vacation horror stories, with the best story of the bunch winning a free vacation. The last branded video Rhett and Link released was “I’m A Textpert“, which ended up becoming one of YouTube’s most-viewed branded videos of the month. They have a good chance to repeat that feat here, so I hope advertisers are paying attention.

To help YouTube-conscious brands get the message, I’m playing “I’m On Vacation” on repeat today. While it will probably be a while until us viewers get another new video on Rhett and Link’s main channel, they remain active through their Good Mythical Morning channel, their Ear Biscuits podcast, and their regular collaborations with other YouTubers.

Also, as one commenter points out, Rhett and Link actually took the vacation they talked about in Barely Political’s YouTube Complaints video. Very clever, guys.