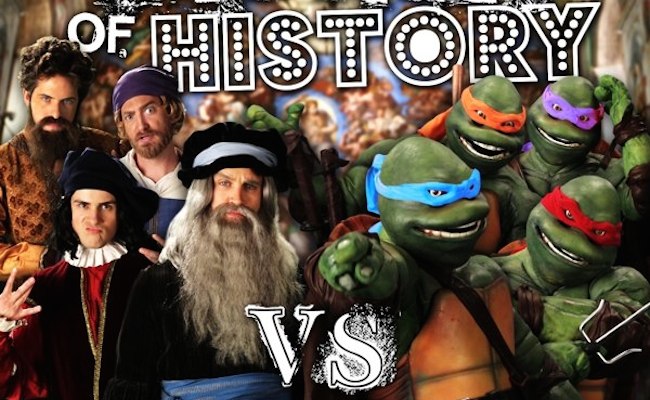 The second half of the third-season of the biggest YouTube series ever concluded on Monday, July 14, 2014 with a collaboration that’s worthy of the exclamation, “Cowabunga!”

Epic Rap Battles of History’s release of Artists vs. TMNT pits the four revered Italian masters Leonardo, Donatello, Raphael, and Michelangelo against the heroes in a halfshell that bear their names thanks to an anthropomorphic rat with an affinity for art history. The historical Leonardo, Donatello, Raphael, and Michelangelo are played respectively by YouTube stars Link Neal, Rhett McLaughlin, Ian Hecox, and Anthony Padilla, while the turtle versions are Lloyd Ahlquist (aka EpicLloyd) in an epoxy and carbon fiber costume designed by Dragan Radic. ERB’s resident martial artist Xin Wuku also provided the jump kicks and any other fancy footwork you see on screen.

The epic, collaborative finale is a very nice send off for a very successful third season of ERB. The program came back from a planned hiatus to commence Season 3.5 on March 5, 2014 with Walter White vs. Rick Grimes. That installment and the next four to follow (which feature cameos from the likes of Ray William Johnson, George Watsky, Zach Sherwin, Chali 2na, and Weird Al Yankovic) have collectively scored more than 85 million views on YouTube. That averages out to more than 17 million views per episode. Once the final numbers come in for Artists vs. TMNT, that average will surely go up.

No word yet on when ERB will be back for a fourth season. But if you need your Peter Shukoff fix before then and happen to be in Europe for the next several weeks, you can catch him on tour. As for Ahlquist, hopefully someone will hire him to do another dis rap sometime very soon.