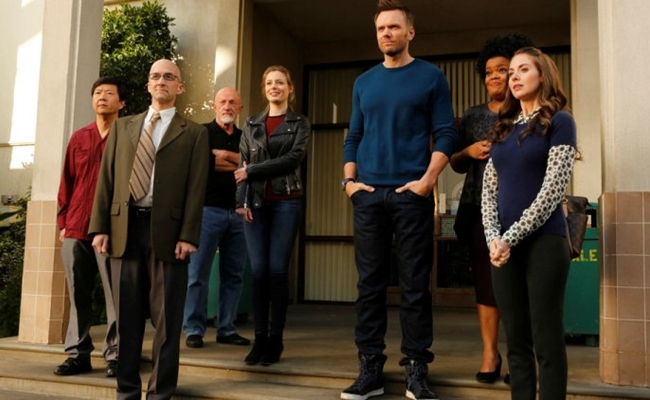 Community fans can rejoice, because operation #SixSeasonsAndAMovie is still alive. Yahoo has announced that it has picked up the cancelled NBC comedy for a 13-episode sixth season, which will air exclusively on Yahoo Screen this fall.

Community was seen as a strong candidate for online renewal as soon as NBC axed it on May 11th. Inquiring minds first turned to Netflix, in hopes that the platform responsible for the Arrested Development reboot would do the same for Community; however, Netflix immediately stated that it would not host a sixth season.

A few weeks later, rumors began to circulate that Hulu would claim Community‘s sixth season, since the show’s episodes consistently ranked among that site’s most popular. Two weeks later, it was Community creator Dan Harmon who shot down the Hulu rumor, explaining that he was “pessimistic” about the possibility of a sixth season.

Enter Yahoo Screen. Yahoo CEO Marissa Mayer has been clear about her company’s plan to green-light series that can compete with the quality of Netflix and Amazon, and Community certainly goes above and beyond that prerequisite. It also slots in neatly alongside the other comedies Yahoo plans to distribute, a group that includes Paul Feig’s Other Space.

Harmon contributed some of his trademark cheek to the announcement. “I am very pleased that Community will be returning for its predestined sixth season on Yahoo,” he said in a press release.  “I look forward to bringing our beloved NBC sitcom to a larger audience by moving it online. I vow to dominate our new competition. Rest easy, Big Bang Theory. Look out, Bang Bus!”

The sixth season will come that much closer to completing Community’s Twitter prophecy. As the show’s TV ratings sagged, its fans rallied behind the cry of “six seasons and a movie,” referencing a line from the show. Therefore, as soon as the upcoming season is complete, look for fans to begin clamoring for a film deal.