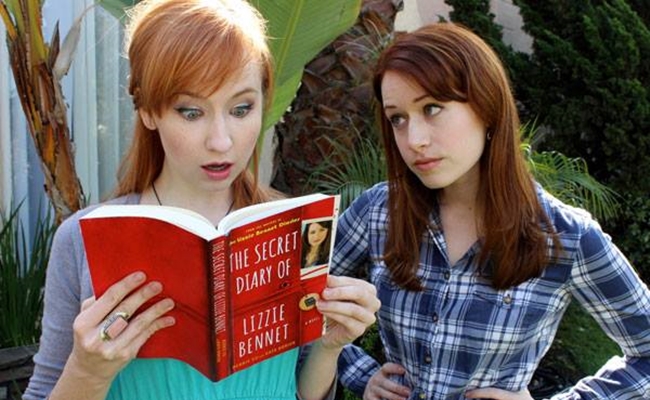 The Book Version Of ‘The Lizzie Bennet Diaries’ Has Arrived

16 months after the final episode of The Lizzie Bennet Diaries, creator Bernie Su has adapted his literary web series into a book. Su and collaborator Kate Rorick have authored The Secret Diary Of Lizzie Bennet, a novel based off of Pemberley Digital‘s YouTube adaptation of Pride And Prejudice.

The Secret Diary Of Lizzie Bennet was first announced in January, when it was given a July 1st release date. Instead, it arrived a week before that date, hitting shelves just in time for VidCon. To promote the release, the Lizzie Bennet team returned to the web series’ main channel for a pair of bonus vlogs starring lead actress Ashley Clements.

The goal of The Secret Diary is to appeal to both diehard Lizzie Bennet fans and newcomers who have not yet fallen in love with the clever Austen adaptation. The novel satisfies the latter group by retelling many major plot points from the web series, while a few “fresh twists” provide fresh material for the former.

The new novel is available in several formats. A hardcover copy is available through Barnes & Noble and Amazon, an e-book version is available via multiple digital retailers, and an audiobook narrated by Clements can be downloaded from iTunes and Audible.

The Secret Diary arrives right as Starz has repackaged the entire Lizzie Bennet web series in TV-length segments that are available on Itunes. There are also more spin-offs to come; The Secret Diary is the first half of a two-book deal with publisher Touchstone. Through these print adaptations, The Lizzie Bennet Diaries is showing off its shelf life.