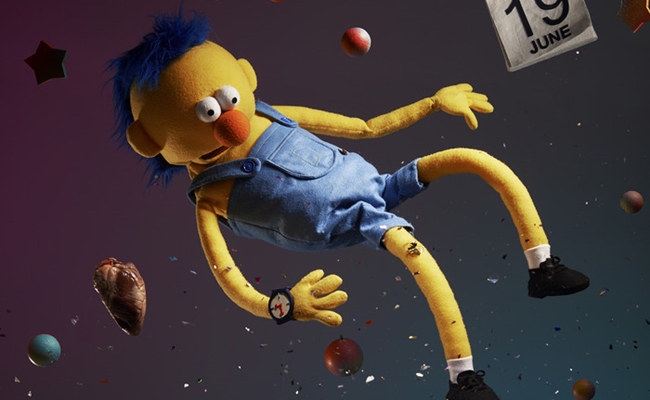 Description: Savvy YouTube viewers will recognize Don’t Hug Me I’m Scared as one of the site’s most memorable viral videos. Released in 2011, it stars a talking notepad that teaches three puppets how to be creative. A few minutes in, it becomes clear that this is no ordinary classroom.

An instant hit, the original Don’t Hug Me I’m Scared has received more than 17 million views to date. A sequel, released in 2014, discusses the concept of time and has scored 6.6 million views of its own. Creators Becky Sloan and Joseph Pelling want to make four more Don’t Hug Me I’m Scared videos, so they have turned to Kickstarter. Their pitch video is, um, nontraditional, to say the least.

Creator Bio: Sloan and Pelling are friends from university who founded the This Is It Collective to showcase their unusual artworks. While Don’t Hug Me I’m Scared may seem silly, it has been taken very seriously, and has been shown at Sundance, SXSW, and several other film festivals. Not bad for a three minute video about talking puppets.

Best Perk: For £150, the Don’t Hug Me I’m Scared team will draw you into the credits of an episode. Hopefully they will let you choose the color of your puppet’s skin.

Why You Should Fund It: Few YouTube videos are as creative and flat-out bizarre as Don’t Hug Me I’m Scared. Detractors may write it off by tossing in the “Random” bin along with other “WTF” videos, but it is far more thought-provoking than the average YouTube poop. The two Don’t Hug Me I’m Scared videos are clever satires of early childhood education, but they’re also exciting to watch because it’s clear that, the first time through, anything can happen.

Sloan and Pelling are asking for a lot of help from their fans because they don’t want their final product to fall short of their first two creators. “£24,000 per episode seems like a lot of money,” they explained, “but making a show that mixes live action, stop motion, 2d animation and puppetry tends to be a bit pricey. However, we believe that the final outcome is well worth it.” If you think that reasoning justifies the price tag, you know what to do. Hurry! There are puppets that need your help.