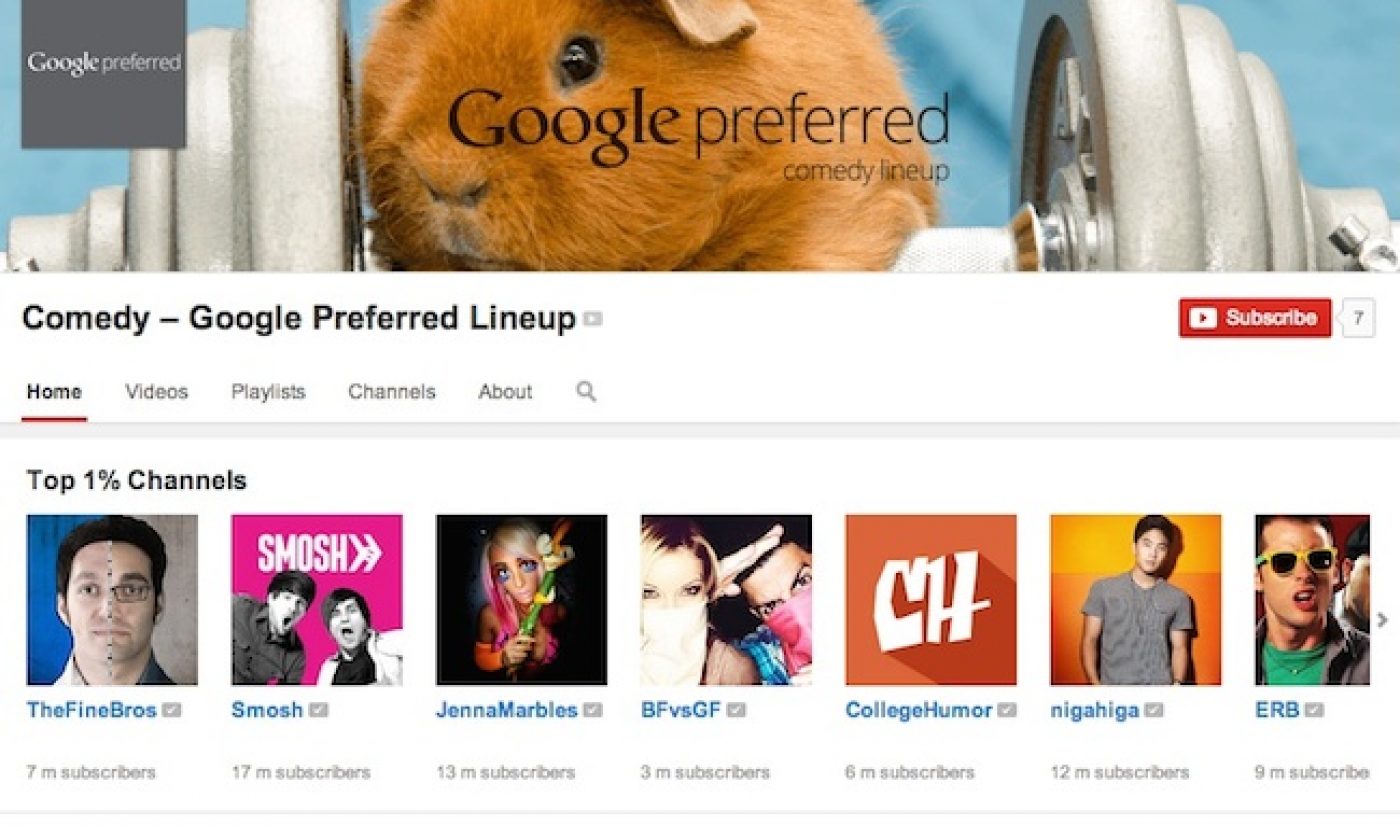 YouTube is prepping to pitch its top-performing channels to advertisers under the banner of a new echelon of content dubbed “Google Preferred“.

It’s the world’s largest video sharing site’s attempt to create scarcity on a platform that ingests over 100 hours of new video uploads each and every minute. Brands and marketers who commit to buying advertising space on YouTube in advance will reportedly be given the opportunity to advertise against these select few Google Preferred channels. Those brands and marketers who don’t commit to buying advertising space in advance may miss out on the opportunity to hawk their wares before, during, and next to some of the most popular creators and channels on YouTube. And presumably, if there’s high enough demand, YouTube will start to sell advertising on Google Preferred channels at a higher rate than the channels that don’t receive that prime status.

So, this all begs the question, which channels are Google Preferred? YouTube has said the Google Preferred title will be bestowed upon the top 5% of its channels in 14 different content verticals. YouTube has also said that top 5% will be determined by a “P Score” (which, I’m guessing, is short for “Preferred”) that takes into account repeat viewership, length of viewing sessions, social shares, and other determining factors and metrics.

Google hasn’t yet made any public mention of what content verticals and which channels will be included in the Google Preferred program, but earlier this week, we discovered a few. YouTube uploaded several Unlisted sizzle reels, highlighting a handful of channels in six different content categories that made the cut to become Google Preferred. The videos were made Private since we released our story, but you can still check out the list of channels here.

Since our initial report, we did some digging, and discovered what looks to be specific YouTube channels for all 14 Google Preferred categories. All the channels highlight the Top 1% of channels within their content vertical, and they’re all “Auto-generated by YouTube.”

That “auto-generated” part is an important distinction for at least one reason. It means these channels without a doubt were created internally by someone at YouTube.

And below are the channels listed as currently being in the Top 1% of each of those categories.

It’s worth noting that we’ve reached out to a few of the channels below, who have all confirmed they’ve been approached by YouTube and were told they were going to be part of the Google Preferred program. Some of the channels below also show up on our previous list of channels included in YouTube’s Google Preferred sizzle reels. Some do not. But that makes sense as the channels appearing in those sizzle reels presumably represent the top 5%, while these lists are focused only on the top 1%.

It’s also worth noting these lists may or may not be finalized (and are most likely in a little bit of flux, considering the top 1% will change over time). For instance, some of the channel’s descriptions appear to be approved copy, while others are far more generic. Some of the video selections also seem off. Grace Helbig‘s old channel – DailyGrace – is listed despite being updated with reruns since the beginning of 2014 when Helbig set up shop at her new channel.

Regardless, the below should give you a very good idea of the prominent YouTube channels and personalities the company will be hawking to advertisers as “Google Preferred” in the very near future. There are a lot of obvious inclusions, but also a lot of relative unknowns in the mix. For example, davidvo48 (aka David Vose) is listed in the top 1% in the News category despite only having 41,000+ subscribers.

Beauty – “From killer nails to ombre, get the look to fashion hauls – the Google Preferred beauty & fashion lineup delivers trusted takes on what to wear and how to wear it. Including beloved YouTube stars like Michelle Phan, Bethany Mota and Zoella, this lineup gives you exclusive access to the new vanguard of beauty & fashion.”

Comedy – “All manner of funny people are forging a comedic frontier on YouTube. New tropes such as pranks, fails and parodies blend with reliable skits and standup in a delightful laugh stew. The Google Preferred comedy lineup features YouTube’s homegrown heavyweights like Epic Rap Battles alongside established megastars like The Onion.”

Food & Recipes – “Looking for tips for a quick weeknight meal? Or techniques for a perfectly rising souflee? Whether quick and easy or elaborate and decadent, the Google Preferred food & recipes lineup serves audiences the recipes, how-to’s and inspiration to feed any craving. This lineup includes iconic stars like Jamie Oliver alongside fan favorites like Rosanna Pansino.”

Video Gaming – “Is there a content vertical more at home on YouTube than video games? From Machinima to Minecraft, a vibrant community has evolved around the sheer passion gamers feel for their favorite pastime. The Google Preferred video games lineup includes blockbuster channels such as IGN, SmoshGames and the king of YouTube, PewDiePie.”