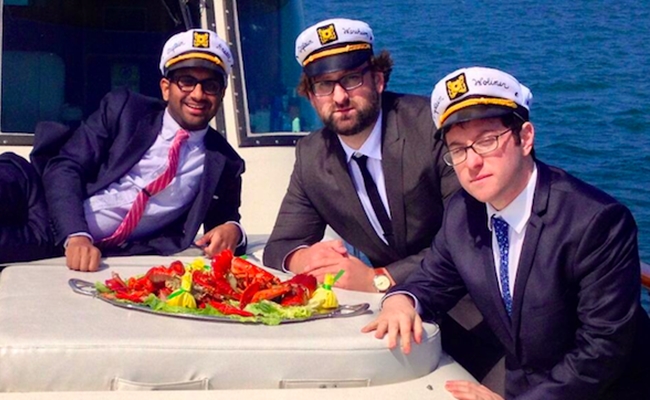 There’s a new club setting sail on the Internet, and it’s out to award some of the best restaurants Los Angeles has to offer. Aziz Ansari, Eric Wareheim, and Jason Woliner are the members of the Food Club, a new web series on Wareheim’s JASH channel.

Don’t be fooled by Food Club‘s seaborne opening sequence or its members’ nautical hats–this web series is actually a total landlubber. It features its three stars (and lowly underling Swab Yang, played by Parks and Recreation writer Alan Yang) as they travel around the LA culinary scene. Restaurants that particularly stand out from the pack are awarded with Food Club plaques, a process known simply as “plaquing.”

Food Club gets its laughs out of an over-the-top parody of reality TV. A super-serious narrator describes the club’s adventures, and the show is filled with excessive effects and melodramatic background music. In the first 15-minute episode, a restaurant’s plaque-worthiness is placed in jeopardy when Woliner (who directed Ansari in the MTV sketch show Human Giant) accidentally spills food on Wareheim’s shirt, a parody reality TV’s tendency to invent conflict for entertainment’s sake.

Despite its humorous intentions, Food Club is more than just a mockumentary. Its stars are all bona fide foodies who know their way around a banh mi sandwich. The food club itself is also very real; Ansari, Wareheim, and Woliner do actually traverse LA and hand out plaques to the best restaurants in town. The Food Club‘s members are all funnymen, but don’t doubt for a second that the club’s mission is serious business.