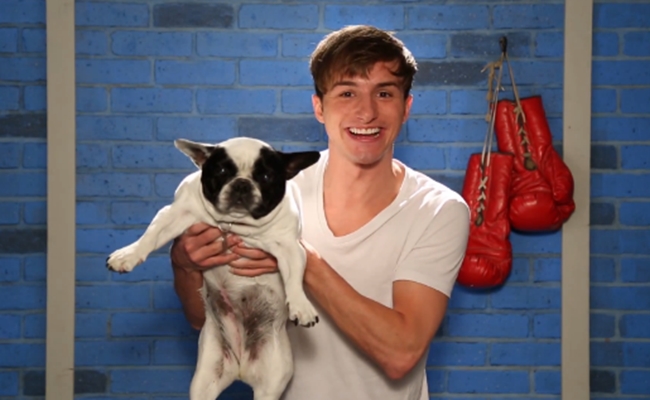 Lucas Cruikshank may not stand on top of YouTube anymore, but he still knows a cute animal when he sees one. The 20-year old creator, whose Fred character once claimed the most subscribers on YouTube, is the host of Cute Combat, a new web series on the Petsami channel.

Cruikshank no longer speaks in a fast-forwarded squeak, but his personality is as hyperactive as ever, and he brings a great deal of energy to Cute Combat. As the host, he pits two categories of cute animal videos against each other and provides some commentary for each video. The first episode pits cross-species snugglefests against aggressive seagulls, with the winner (determined by viewer input) advancing on to a future episode.

For a show about cute animals, Cute Combat is loaded with online video talent. In addition to Cruikshank, the series features YouTuber Michelle Glavan as its writer, and future episodes will feature cameos from the likes of SuperEd86, Peter Gilroy, Ceciley, and Bree Essrig. Behind the camera, Fishbowl Worldwide Media serves as the producer for Petsami content and supplies Cute Combat with UGC clips from its expansive America’s Funniest Home Videos vault. Petsami is in turn a part of Discovery‘s Animalist network, so there are a whole lot of hands in this cookie jar.

New episodes will arrive each Monday until a grand champion is crowned at the end of episode 22. Now that March Madness is over, there’s space for another bracket competition in our lives, and nothing can fill that bracket better than cute animals.