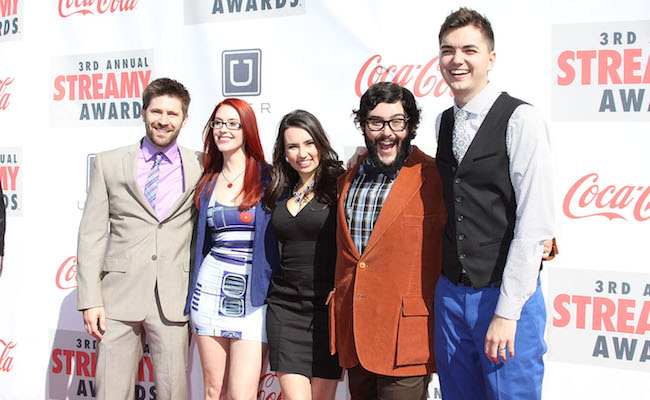 SourceFed is one of (if not the) most successful channels to come from the now defunct $100+ million YouTube Originals Initiative. YouTube star Phil DeFranco leveraged his already massive and actionable fanbase to launch the multiple-times-a-day news program (which I once described as being a kind of Daily Show for the YouTube generation) back in January 2012. Since then, SourceFed has amassed over 1.3 million subscribers, racked up over 660 million views, and spawned at least one geeky offshoot. The show’s success, no doubt, factored into Revision3’s acquisition of the brand along with other assets in DeFranco’s portfolio, as it displayed how the twentysomething online video entertainer and entrepreneur could build new entities that weren’t centered around him being the only individual on camera.

And second, let’s get back to Morgan and Turney.

Morgan was one of the inaugural hosts of SourceFed, along with Joe Bereta and Lee Newton. DeFranco had been a fan of Bereta’s videos for some time, but told Tubefilter he discovered Morgan and Newton during casting auditions and “instantly fell in love with them.”

Some 26 months-or-so-later, Morgan announced on April 2 by way of his Facebook page his plans to leave SourceFed on April 15 (“because if Tax Day isn’t fun enough, now I have to say goodbye to some of my closest friends”). The decision clearly wasn’t an easy one and seems to come from the simple yet difficult conclusion that it was time to move on and try something new.

“After several months of self-reflection, prayer, and discussions with family and friends, I’ve decided to leave SourceFed,” Morgan writes. “I absolutely love the people I work with, and I’m incredibly proud of the content we’ve created over the past two plus years, not to mention the amazing audience that has supported me. That said, in my life, I have found that I have to take risks and move on, whether I’m comfortable doing so or not.”

While Morgan isn’t yet too sure what the future will hold, it will definitely involve more installments of Happy Hour on his own YouTube channel.

In terms of Turney, she joined the ensemble hosting cast of SourceFed back in the first half of 2012 and announced on April 3 via an emotional YouTube video she would depart the show by the end of the month.

“Phil always likened SourceFed to a spring board,” Turney notes in the vlog, and while she’s incredibly thankful for her experience with the program and the audience she’s gained while being there, it’s time for her to launch into the next phase of her career.

In terms of Phil in regards to Morgan and Turney, he posted the following statement to his PhillyD.TV site:

If you follow them on social media you probably know that Meg and Elliott have announced they are leaving SourceFed/Nerd on the 15th and 30th of this month.

Things I will say:

In terms of the rest of the SourceFed cast in regards to Morgan and Turney, they’ve been giving the pair well wishes by way of social media.

@PhillyD @ElliottcMorgan we gotta send him off with a big, sad clip show goodbye, and that Green Day song!! #SEINFELD #RATINGS #SWEEPS

And they’ve also been having fun with their own departure announcements.

Here’s to wishing Morgan and Turney the best of luck in their future online video endeavors and beyond. And be sure to tune into YouTube.com/SourceFed this month as they make their semi-final (both may be back as guests in some capacity in the future) appearances on the program.