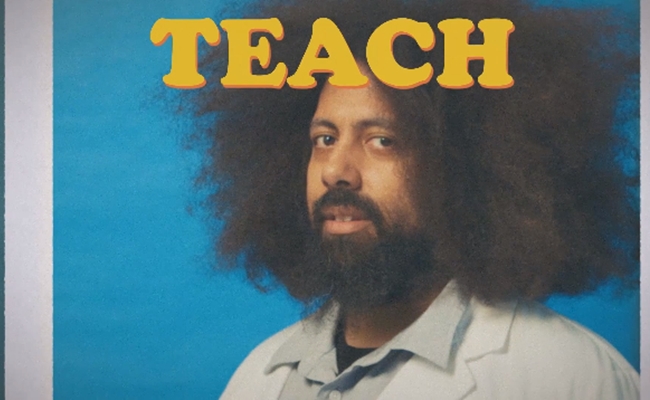 Reggie Watts is a musician, a comedian, and a TED talker, but a schoolteacher he is not. In Teach, his latest web series, the funnyman shows what would happen were he to teach a class.

The first episode takes Reggie to a biology classroom, where he teaches students the difference between a proton and a tauntaun, tells them about the fastest object in the universe (the cheetah, obviously), and steps out for a quick drink in the middle of class. The whole thing is tied together by a retro 70s look, filled with soul music, Styx references, and big hairdos (on both Watts and his pupils).

The second episode brings viewers the Reggie Watts approach to literary analysis, featuring breakdowns of both To Kill A Mockingbird and Of Mice And Men. I think Reggie’s approach is a little different from my high school teacher’s method, but hey, I guess a lot has changed since the 70s.

This is Watts’ first scripted series on YouTube. His JASH channel is also home to a couple series where he conducts musical experiments. Even though there isn’t much music in Teach (yet), it will be a big hit with Watts’ fans and the JASH audience. New episodes will arrive on the next two Tuesdays.