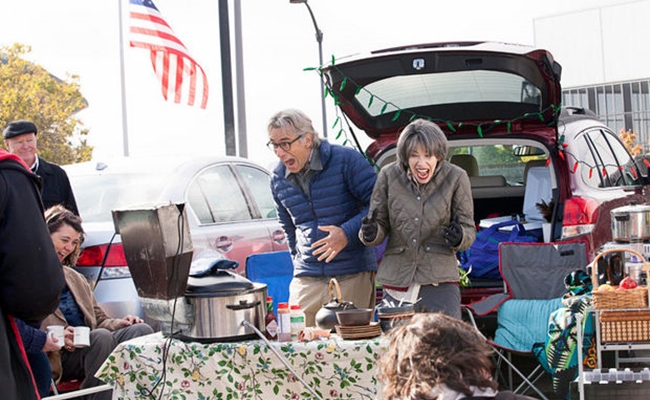 ‘Portlandia’ Offers Its Guide To Tailgating In New Web Series

The residents of Seattle are getting hyped for the Super Bowl, but a few hours down I-5, there’s a different sort of excitement: A Prairie Home Companion is coming to town. In advance of the debut of its fourth season, Portlandia has debuted a web companion set in a parking lot before a taping of the popular Garrison Keillor NPR program.

The five part web series features Fred Armisen and Carrie Brownstein as graying Oregonians who are fired up for A Prairie Home Companion‘s trip to the Rose City. Instead of hot dogs, beer, and painted chests, the Portlandia crew’s tailgate features vegetable soup, yerba mate tea, and some lukewarm chants of “When I say Garrison, you say Keillor!”

The series is distributed by IFC and  branded by Subaru, which gets in plenty of glamour shots as the characters huddle around the open trunk of an Outback. The in-car music system also gets some nice pub when the characters use it to play some twangy folk music during a ‘dance party’.

Some of the other episodes introduce us to A Prairie Home Companion streakers and show us the best ways to scalp tickets.

Ultimately, the Portlandia web companion is a solid but not spectacular one, though it does get bonus points for being the only A Prairie Home Companion companion. Unfortunately, I’m not sure if any of the Portlandia tailgating tips can be transplanted to Sunday’s Super Bowl, especially since it will be hard to find enough outlets for everyone to bring their own portable crock pots.