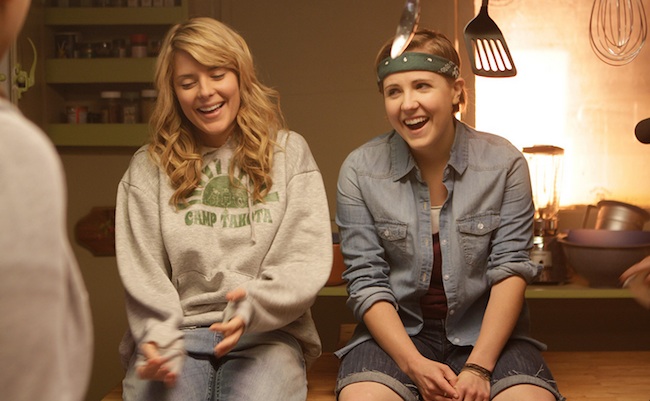 Good news for those persons without a Netflix subscription or not in the target demographic for cunning political dramas starring Kevin Spacey and Robin Wright, but who are still looking for something online video-oriented to do this Valentine’s Day. The second season debut of House of Cards isn’t the only major online video event on February 14, 2014. That’s the date Camp Takota is set to launch, too.

The made-for-download-on-the-internet movie stars Grace Helbig, Hannah Hart, and Mamrie Hart as three longtime-sleepaway-summer-camp-campers-turned-counselors who rekindle their lost friendship through a combined effort to save their Camp Takota from an evil individual who wants to turn it into a Digital Interactive Camp (a name which just so happens to have a very convenient acronym for comedy).

Here’s Hannah Hart’s version of the trailer, which explains none of that:

And here’s the official trailer, which has some sick title sequences and gives viewers a much better idea of what the movie is all about:

Helbig, Hart, and Hart’s aggregate 2+ million YouTube subscribers (it was way more before Helbig had to switch to a new channel) and other interested parties will be able to purchase a DRM-free download of Camp Takota on Valentine’s Day via VHX at CampTakota.com for $9.99.

“Camp Takota’ embraces the seismic shifts taking place in Hollywood by building a film property around digital-native stars who integrate their fans into everything they do, “said Camp Takota producer Michael Goldfine, president of RockStream Studios in the release.

With that integration in mind, fans of the trio can also spend up to $300 on “Care Packages,” which include a download of the flick plus limited-edition extras like “Camp Takota t-shirts, camp undies with name-tags (just like your mom did them when you went to camp), handmade friendship bracelets, private cast and crew Google Hangouts, cast-recorded personalized voicemail messages, custom videos and more.”

Be sure to tune into Camp Takota on February 14, 2014, and stay tuned to the movie’s website for some sweet animated gifs and updates until then.