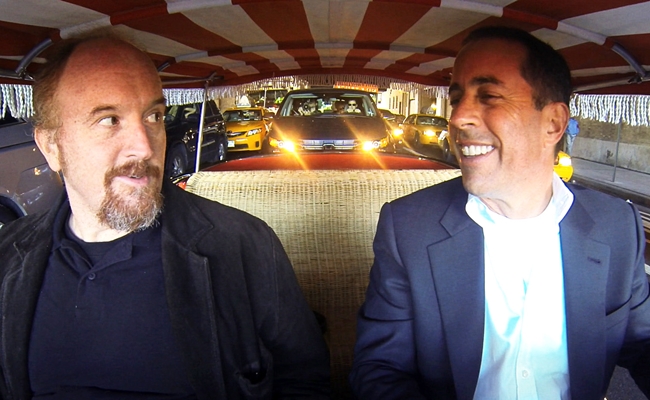 ‘Comedians In Cars Getting Coffee’ Returns With Louis CK, A Crazy Fiat

Jerry Seinfeld has no shortage of neat cars and sassy comedian friends, so he’s once again combining those two resources for a third season of his Crackle web series, Comedians In Cars Getting Coffee. The first of six new episodes, guest starring Louis CK, has arrived on Crackle.

The debut episode happens to feature the most ridiculous car Seinfeld has ever brought to his web series. He and CK roll around in a coral orange 1959 Fiat Jolly, which has no doors, wicker seats, a top speed of 65 MPH, and a two-cylinder engine (“One for you and one for me,” quips Seinfeld.) The car, with its 50s style, fits the pre-roll ads Seinfeld designed specifically for the series.

Part of the fun of Comedians In Cars Getting Coffee (or part of the problem, to detractors) is the appeal of living vicariously through Seinfeld and his rich friends as they do rich person things. Season three is no different, as the coffee portion of Seinfeld and CK’s conversation takes place aboard CK’s yacht as it carries the two comedians on a leisurely ride up the Hudson River. CK jokes that he shouldn’t even own the boat, joking that “you shouldn’t buy a yacht unless you can afford ten yachts.”

For better or for worse, Comedians In Cars Getting Coffee is the same as it’s always been. Your enjoyment will depend on how much you appreciate each guest star, and with the trailer teasing future appearances from Tina Fey, Howard Stern, Jay Leno, and Patton Oswalt (in a Delorean), season three should be chock-full of some of your favorite funny people.