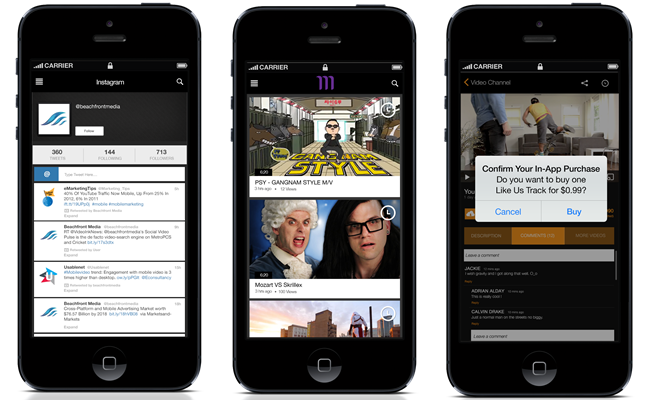 Google’s Q3 earnings report revealed that more than 40% of YouTube traffic comes from mobile devices, and with the site doing everything it can to bring massive advertising budgets to smartphones and tablets, that percentage is only going to go up. With this trend in mind, video technology company Beachfront Media is looking to assist YouTube creators as they attempt to make big bucks on tiny screens. It has launched Beachfront Builder 2.0, a platform that helps users create all-encompassing mobile apps.

Beachfront is hawking its new Builder as easy-to-use and open to any creator who wants to beef up his or her mobile presence. Essentially, the platform spawns apps that combine social media accounts with monetized video streams while also directing fans to Google Play and iTunes with the touch of the button. This theoretically allows users to ‘control’ their mobile audiences as easily as those that take directions from finely-tuned YouTube homepages.

“Our first iteration of Beachfront Builder gave video publishers a platform to create an app presence that could be viewed across all screens. While our focus continues to be video, social channels are a great way to interact and engage with fans. Builder 2.0 makes it possible to create your own mobile community between YouTubers and fans, while introducing new revenue opportunities.”

Several top multi-channel networks–such as Maker Studios and Big Frame–have already embraced the Builder. Mobile-conscious creators should give it a look.