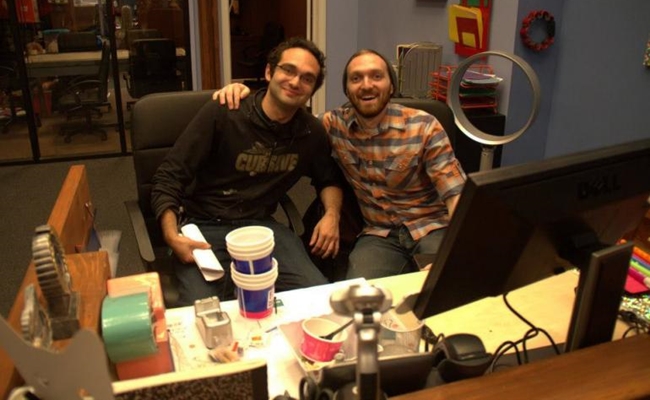 YouTube Billionaires: The Fine Bros React To Their Billionth View

Tubefilter: How does it feel to cross one billion views? What do you have to say to your fans?

Fine Bros: We are all in this together.  This is a new future for entertainment, and the fans directly being engaged with us has been happening and will continue to happen for years to come.  This milestone is a testament to their support of us, some having watched our series for coming close to 10 years now.

TF: What do you think makes your ‘React’ shows so appealing to fans?

FB: In general, we’ve found we simply don’t talk to one another as much as in the past, despite all the technology connecting us.  Hearing what people have to say, and valuing who they are, and championing regular people and having an actual opinion vs. the politics that creeps into most conversations we think makes it resonate with people of all ages.

TF: ‘YouTubers React‘ is particularly popular. Which episode of that series is your personal favorite?

FB: We don’t have favorite episodes, there’s highlights to all!

TF: Any plans for any other ‘React’ variants?

FB: Yes, but it’ll be a bit till they get off the ground.

TF: What do you think is the most exciting part of the return of ‘MyMusic‘?

FB: The continued case study that long form, TV quality content can work and sustain online.  A second season of anything is a big success for a series, but particular with web narrative being so difficult to find that success, series like MyMusic help prove what the future will be. Especially in regard to the transmedia which to our knowledge, MyMusic is the most engaged transmedia series on the web and we’re breaking new ground every day in that area.

TF: Is ‘MyMusic’ still affiliated with YouTube’s Original Channels Initiative? How has that project influenced the development of the series?

FB: YouTube has always been a strong partner and there would be no MyMusic without them.  They let us create the content we want, and have a platform that can be used to create a full experience which makes it stand out among all other distribution platforms.

TF: What is the number one request you guys get from your fans?

FB: “When is your next new show” which we love as creators.  We have a fanbase that is excited about and wanting new series as well as old, at all times.  Our channel is really becoming like a TV network with hit shows across all formats – scripted, unscripted, animated, and interactive.

TF: Your other recent series was ‘Emo Dad‘. Any plans for more original series?

FB: Emo Dad was a big success and we hope to bring it back.  As for new series, we plan to bring back the popular Last Moments of Relationships series, have a 2 part mega interactive game that will be released in the fall, and have plans for multiple new series as we approach 2014.  We currently have 11 series being released every month across our channels, we’d like to expand that further.

TF: What other fun plans do you guys have for your channel?

FB: We hope to create more ways to interact with our viewers, as well as connect everyone more specifically.  We have ideas in the early stages about a series based around crowdsourced content, as well as bringing “React” on the road.. Stay tuned, we’re just getting started!