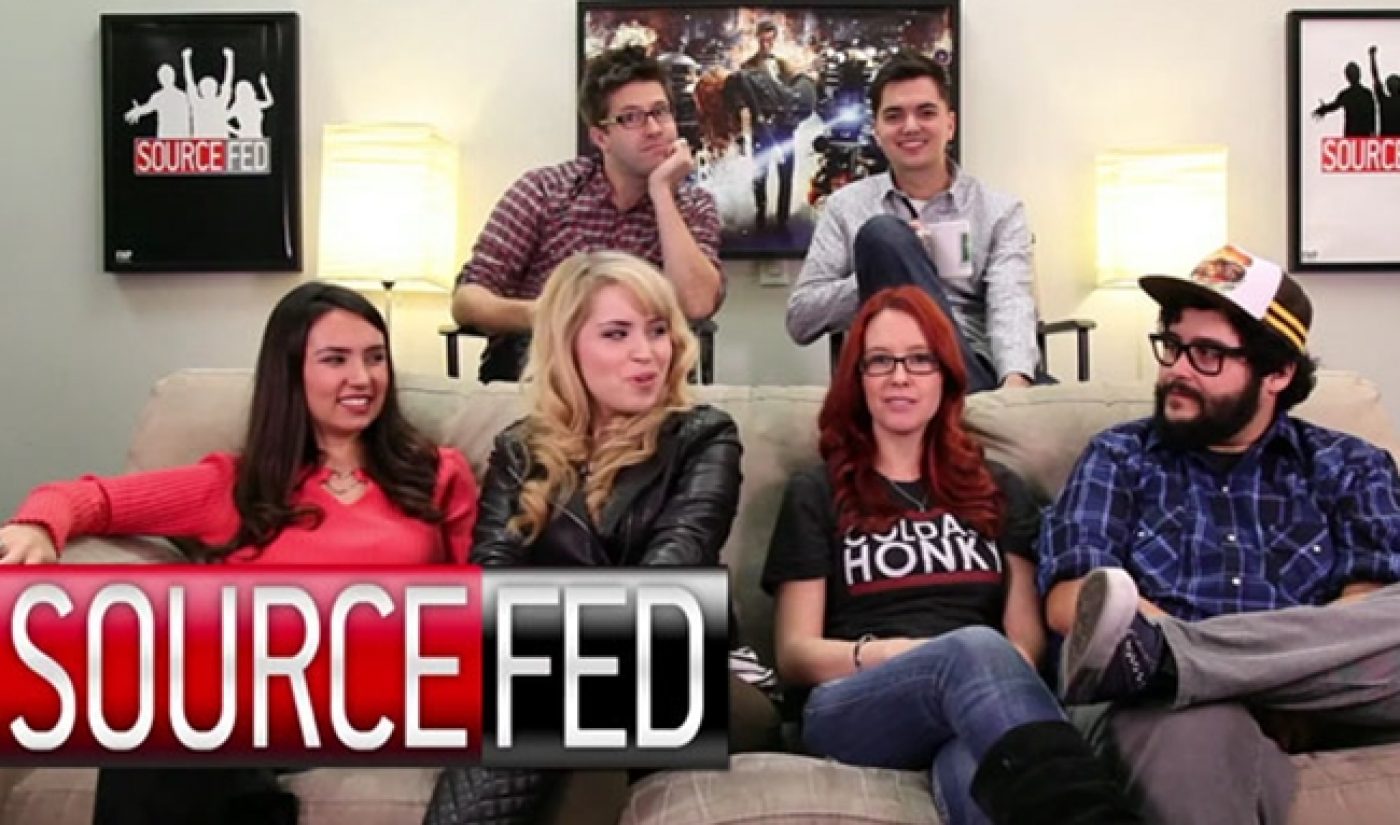 Considering all the success SourceFed has had, it’s hard to believe it only began in earnest in January 2012. In just a year and a half, SourceFed has managed to cross the one million subscriber plateau, reel in more than 400 million views, and take home some serious hardware at the most recent Streamy Awards. We talked to one half of the SourceFed crew–Joe Bereta, Elliott Morgan, and Trisha Hershberger–about all the amazing things their channel has accomplished over the past 18 months.

Tubefilter: How does it feel to cross one million subscribers? What do you have to say to your many fans?

Joe Bereta: Holy crap!  It’s crazy.  I discussed this in our million subscribers video.  If we gathered all of our SourceFed fans up and claimed a chunk of earth as an independent nation, our population would sandwich us right between Djibouti and Timor-Leste.  Our primary export would be dolls made from human hair.

Elliott Morgan: You know what’s crazy about one million subscribers? Besides how humbling and jaw-dropping it is, there are over 300 channels with a million subscribers. That speaks to the massive shift in the entertainment industry that’s happening via YouTube. It’s craziness. It’s taking over the world. It’s running for President soon! VOTE YOUTUBE 2016!

TF: SourceFed has been the most successful channel launched specifically for the YouTube Original Channels Initiative. Do you think that being a part of that program has helped you get where you are today?

JB: I think the Original Channels program created a starting point.  After that, success and failure was on SourceFed’s shoulders.  A lot of big-name celebrity channels started right along with us and where are they now? We were one of the few shows that consistently pumped out content with a clear mission.  We treat our channel like a job, not a side hobby.  I think the dedication we poured into the videos is what ultimately elevated our game.

EM: Being a part of this family has definitely helped launch me to where I am today, but the greatest part of being the “most successful,” is the creative freedom to launch other projects. I’ve wanted to do my own channel, podcasts, and other creative works, and SourceFed has allowed those things to happen.

TF: On a similar note, what kind of response have you guys seen to SourceFedNERD? Have you been pleased with the results so far?

Trisha Hershberger: SourcefedNERD is the place for us to just be ourselves and have fun!  We talk about things that we are passionate about and the audience response has been overwhelmingly positive and supportive.  I am excited to see where the channel goes from here!

EM: SourceFed WHO?! WE HAVE A NERD CHANNEL?! WHY AM NOT ON IT?! I MEAN I NERD TELEVISION AND EVEN ART DECO INTERIOR DESIGN, THAT’S GOTTA COUNT FOR SOMETHING!!!

JB: It’s been incredibly positive.  NERD gifted us with a channel to throw up a little bit more of the fun and wacky stuff.  It’s also a destination for very niche content that finds the eyeballs connected to the people that want to watch specialized videos.

TF: You guys read a lot of user comments for your ‘Comment Commentary‘ series. What has been the strangest comment you’ve ever read on a SourceFed video?

JB: Too many to sift through in my brain place. It tends to get weird when you can’t distinguish between fiction and reality.  People say weird stuff on the internet.

EM: Look, news in print is where we get OUR news. Those are the real journalists, and we take what they do and try to make it palatable and entertaining. News on TV, well… is that still a thing?

JB: I know that our coverage is different. I think of us more as an entertainment platform than strictly a news source. We cover five topics a day, four days a week, and those topics are decided upon by the hosts.  We cover stories we personally find interesting/important/entertaining and put an oddball, SourceFed spin in the mix. Because of this, we don’t cover EVERYTHING.  And I don’t think we should.  The hope is that when we cover a story, we convey factual information, preferably every side, and leave it up to the viewer to come to their own conclusion.  That’s the purpose of the question at the end of each piece.  We want to start a discussion  I think we differ from mainstream these days because those sources always seem to deliver the news with an agenda.  And that makes me feel dirty in my dirty bits.

TF: What’s your strategy for being both entertaining and newsworthy?

EM: I like to think of ourselves as similar to the Colbert Report, just with fewer writers and you know, not as good, haha. So much of what is wrong with our current climate in America is due to the hypersensitive and sensational nature of our media. I think there’s value in not taking things too seriously, which we succeed at in flying colors. It helps keeps things in perspective.

JB: We strive to present the facts correctly and then encase those facts in fart jokes spit takes.  Again, I believe people watch us for news presented with silly antics and intelligent commentary.  If they just wanted the NEWS, they could go anywhere else.

TF: How well do you think SourceFed has done in terms of establishing itself as its own unique channel separate from Philip Defranco‘s personal channels? How big of a role does his vision play in SourceFed’s day-to-day operation?

EM: Phil and our producer James Haffner created the blueprint for SourceFed. They built the bike and we rode it onto the highway at rush hour, which is highly illegal and dangerous but I feel like the metaphor works.