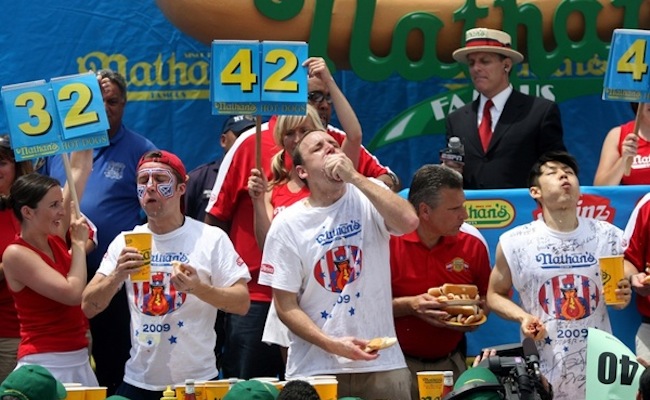 Way back in 2006, I was a live spectator at Nathan’s Annual Fourth Of July Hot Dog Eating Contest. I made it Coney Island’s Surf Avenue 90 minutes before the noon showdown and positioned myself in the front row outside of the now 97-year-old iconic institution of encased meat. The contenders stood on a pantheonic platform raised several feet in the air and I basked in a constant spray of saliva and foodstuffs for 12 minutes as Takeru Kobayashi ate 53-and-three-quarters hot dogs to take home first place in one of the last Nathan’s contest in which he would participate.

Well, that’s not entirely true. I was a live spectator, but stood some 100-or-so yards away from the lights and action with all the other individuals who came witness the International Federation of Competitive Eating event. The stage was impressive, but it was solely to provide a good vantage point for all of the news outlets, reporters, photographers, and the multiple camera angles that would provide television coverage for the event.

Competitive eating is certainly a spectator sport, just not one that’s necessarily conducive to watching live.

But my lesson is to your advantage. Don’t fret that you can’t make it to to the beaches of Brooklyn to catch the spectacle, because it’s much better viewed from the comforts of your internet connected device.

ESPN3 will serve up a live stream of the Women’s Championship at 11:25AM ET followed by the men’s competition at 12Noon ET. Sonya Thomas will look to defend her title and beat her previous record 45 HDBs (hot dogs and buns) in 10 minutes, while Joey Chestnut will be competing for his 7th win in a row and to top his record 68 HDBs.

Be sure to tune in and be equal parts amazed, disgusted, and impressed. God bless America.