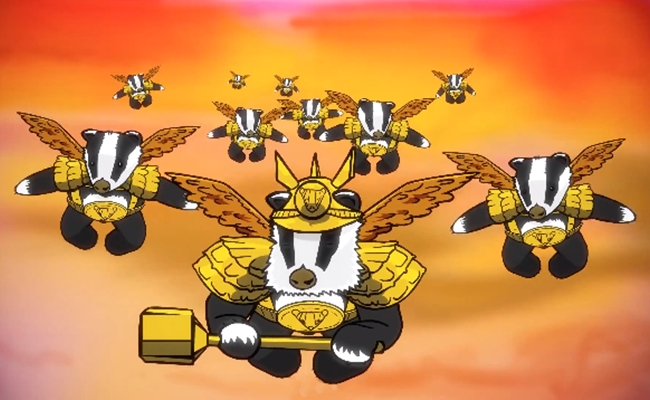 I expected plenty of familiar faces at YouTube Comedy Week, but on Tuesday, the event threw me one name I didn’t expect to see: Mr. Weebl. Today’s kids may think the Nasty Ass Honey Badger is the greatest badger-related video on the Internet, but they just need some perspective. Back in the day, Weebl’s ‘Badger Badger Badger’ became one of the first great viral videos, and ten years after its release, Weebl has created a version for Comedy Week. This time around, godly badgers fly through the sky as a Queen-like remix of the original song plays. The whole thing is actually a very clever partnership with Team Badger, a group hoping to save Britain’s dwindling badger population. (For the record, that’s eight uses of the word “badger” in the opening paragraph. Now it’s nine.)

Aside from the revenge of the badgers (ten), Tuesday’s slate also featured a few other fun videos, including regular episodes from Epic Meal Time and Hello, Harto, some individual sketches from Sunday night’s disappointing opening show, and a few one-off videos (such as one starring Chester See as himself and Taryn Southern as his stalker). A full rundown of the day’s videos, featuring a host of YouTubers, is available on the Comedy Week channel.

Maximus Thor was another welcome sight, as the deep-voiced baby showed up to play a game of Operation. Creators like Weebl and Thor represent the wacky content that made YouTube grow big, and it’s great to see them featured in a showcase of the site’s comedy. If only they had been present from the start.