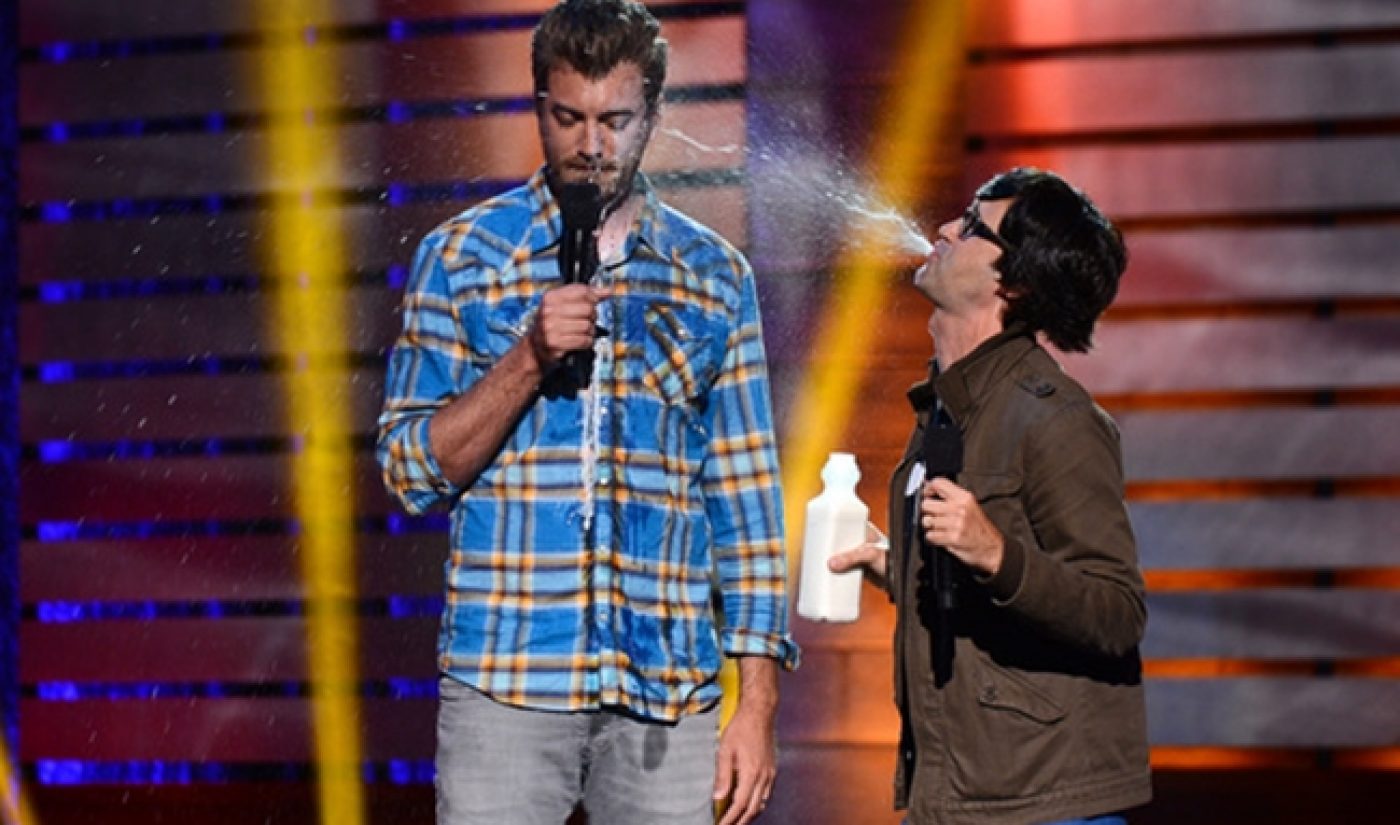 Last night, YouTube kicked off its Comedy Week with a ‘Big Live Comedy Show‘ starring dozens of funny people from both new and traditional media. Promos used the tagline “this better be funny” to promote the event. Unfortunately, the vast majority of the kickoff show very clearly wasn’t.

Here are six reasons why what should’ve been a laugh fest (or at least a fake laugh fest) was a weak start to Comedy Week:

This particular mix of new and traditional media didn’t gel.

During the pre-show, hosts Jenny Slate and Kassem G invited the legendary Norm Macdonald to join them. The former SNL cast member proceeded to run through a list of online creators he had clearly never heard of. When Slate praised Macdonald by calling him “one of the best,” he sarcastically quipped “well, I’m no Harley Morenstein.”

And yet, when Morenstein appeared later in the show (alongside the spectacularly unfunny Todd Glass, who seemed to think constantly complaining about the producers’ voices in his earpiece was a form of quality entertainment), he was treated like YouTube royalty. It was a confusing double standard that persisted throughout the entire live event.

One minute, individuals who had received YouTube notability were praised. The next minute, YouTube stars (and internet programming at large) were objects of derision. Traditional media personalities joked about the Internet as an untamed Wild West. Some acted as if it was an inferior platform. Then YouTubers were touted as actual stars who are defining a new entertainment medium.

YouTube could have billed the show as a celebration of new media or as a winking, self-deprecating roast. Instead, it tried to do both, and it didn’t work.

Online video stars are new to doing it live.

The beauty of YouTube is that it isn’t a live format; you can watch whatever you want whenever you want. Therefore, the vast majority of YouTube stars built their audience on content that doesn’t need to be seen live. When you ask these stars to recreate their pre-recorded brilliance in the moment, it can leave something to be desired.

Toby Turner, Epic Rap Battles of History, and Tim and Eric produce some amazing programming. It would’ve been nice to see some of it to back up and accompany their live performances as they still find their footing on stage in front of an audience. It’s not surprising that most of the night’s best content, such as a funny set from stand-up comedian Jerrod Carmichael, came from seasoned live performers.

There was too much waiting.

The live stream began at 8 PM EST, and promos advised us to tune in then. However, that was only the beginning of the pre-show, and the actual event didn’t begin for another hour. While Jenny Slate and Kassem G did well as hosts, the viewers didn’t tune in for a pre-show.

As anyone with a well-defined release schedule in online video knows, the YouTube audience does not like to wait. It also doesn’t like things that are super long. YouTube should’ve been more clear about when the actual show would start and could’ve tightened up a broadcast that in total was bumping three-and-a-half-hours in length.

Most of the traditional media stars didn’t seem to care.

And really if they’re not attempting to build their own multi-channel networks where they can bypass traditional production models and be in control of their own programming, why should they? Jeff Ross, Seth Rogen, Glass, and others have their pre-existing homes and fan bases on TV and film and in comedy clubs. Macdonald is even in possession of a burgeoning YouTube channel, yet seemed to vacillate between apathetic and ornery behavior (that went way beyond his usual schtick) whenever he was on camera.

If the YouTube Original Channels Initiative taught us anything, it’s that a spirited effort created by an online personality will draw a more enthusiastic YouTube audience than a half-hearted effort from a celebrity who has other things on his mind.

Not enough Key of Awesome.

People have different tastes, comedy is subjective, etc., etc., but at least for me, Key of Awesome‘s ‘Start a Mumford Band’ was the best part of the show.

Here’s the most critical issue: YouTube hyped the hell out of this show. I saw ads for YouTube Comedy Week on TV. I saw them in the subway. They even brought in Ahnold. This was YouTube’s chance to prove its worth as a legitimate comedy platform in front of a huge audience, and it put out a product that doesn’t even begin to capture the amount of funny stuff the site has to offer. YouTube can be just as funny as (if not funnier than) any other medium, but not like this.

YouTube Comedy Week can still save itself. There are a lot of funny people involved. There are many more videos to come. I do believe I was promised some Key and Peele. But it is off to an undeniably bad start. The Big Live Comedy show flopped, and instead of being a groundbreaking event, it may have been a step back.