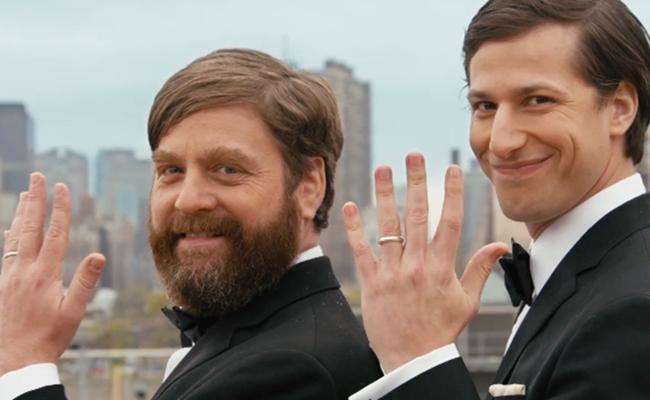 Between Two Ferns made its triumphant return to the Internet during Oscar season, and it looks like Zach Galifianakis‘ hilarious parody of film talk shows (recently chosen by Time Out New York as the web’s funniest series) still has plenty of life left. The show appears as an introduction to the latest Lonely Island video, which combines the hard-partying lifestyle of Spring Breakers with gay marriage.

Galifiankis’ guest is James Franco (star of Spring Breakers), and during one of Between Two Ferns‘ characteristically awkward exchanges, Galifianakis tells Franco to marry Edward Norton. When the scene shifts to the “musical guest”, all of these elements come together for a song about heavy drinking, chicks, and, of course, marrying Edward Norton (who makes a brief cameo appearance).

It’s the first time there has been a collaboration between Between Two Ferns and another channel (in this case, to celebrate the beginning of Lonely Island’s Wack Wednesdays), and it works really well. What do I have to do to get Galifianakis to turn his creation into a full-length variety show, with awkward interludes throughout? I’m willing to marry him, if that’s what it takes.