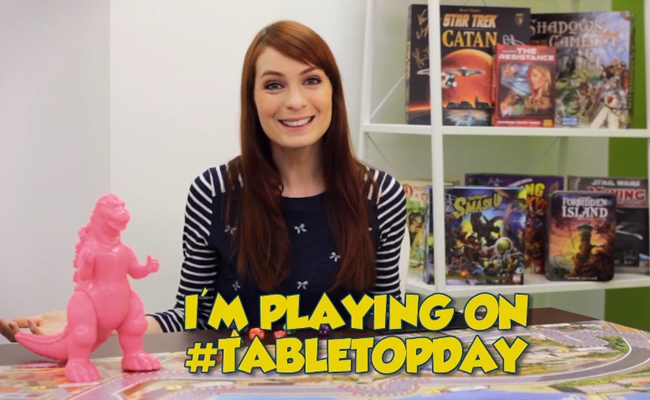 Felicia Day‘s Geek and Sundry channel will celebrate its one year anniversary on April 1st, and the YouTube Original Channel dedicated to nerd culture is celebrating with a new slate of programming. In addition to returning existing favorites, three new shows based around video games will be launched.

The two returning shows are Space Janitors, the sci-fi comedy created by Geoff Lapaire of Pure Pwnage, and TableTop, where Wil Wheaton invites notable nerdy people onto his show for some board game action. Season two had better feature a round of Carcassonne, or else. To spice up the new season, Day and Wheaton are launching International Tabletop Day, a global event dedicated to analog gaming.

Three debutant series will join the two returnees, with video games taking center stage. Felicia’s Ark will see Day and her viewers choosing which video game animals to take aboard her ark, thus saving them from impending doom. My vote goes to this guy for sure. Robot Chicken‘s Jordan Allen Dutton will take over on Wednesdays with an animated comedy, Fetch Quest, which will mock video game culture and will apparently feature a few musical numbers. Finally, Fridays are now dedicated to The Player Ones, a sketch comedy group that will mock video game logic. I assume it will be like this, but wackier.

“It’s been a year since the launch of Geek & Sundry on YouTube,” said Day. “And I have to say that the success of the channel’s shows have been a true testament to the phenomenal community that we have, and we are so grateful for their support.  I’m excited for our upcoming new shows as well as old favorites in our second cycle of Geek & Sundry.” Let’s hope it’s not just a cruel April Fools’ Day joke.