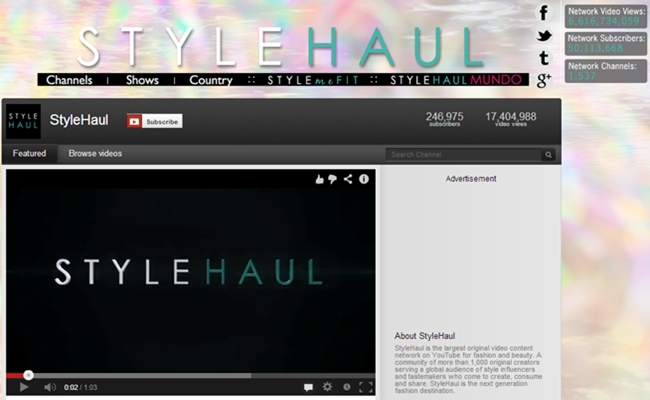 StyleHaul Looks To Become Top Network With $6.5 Million Funding Round

Through an assortment of original programs and a choice selection of assimilated fashion videos from around the web, StyleHaul has become of the top fashion networks on YouTube. The two year old channel is adding to the $4.4 million round it raised a year ago, bringing in a $6.5 million investment led by Bertelsmann.

The new Series B round will help StyleHaul cement its place as one of YouTube’s richest multi-channel networks. In addition to the main StyleHaul channel, which sports almost 247 thousand subscribers and more than 17 million views, several partnered channels, such as the budding Leaf TV feed, have also been successful. Network CEO Stephanie Horbaczewski claims 50 million monthly viewers for the network, though it is not among Comscore’s top 10 networks, a list sorted by monthly YouTube uniques.

StyleHaul‘s offerings include fashion, style, and lifestyle videos, specifically tailored to an Internet audience. Without their coverage, we would have had no idea who the best dressed celebs were at the Streamy Awards.

One of StyleHaul’s initial investors was Allen Debevoise, the CEO of Machinima, and the recent funding round asserts that, like Machinima, StyleHaul is dedicated to raising capital as a main pillar for supporting its niche programming. Though the $11 million dollars it has now raised still pales in comparison to the $35 million and $36 million figures raised by Machinima and Maker Studios, it is still one of the largest amounts for a genre-specific MCN.

There is a clear YouTube audience for style videos; after music and gaming, lifestyle is one of the most popular categories on YouTube, and with $6.5 million in its pocket, StyleHaul now has the task of sorting through that category in search of the hottest of the hot.